Hoping it will help prevent other Edmontonians from falling victim to financial crime, Shannon Baxter is sharing her experience of discovering that her mother had defrauded the family business.

'You always think of family as people you can trust, but people can change,' fraud victim says 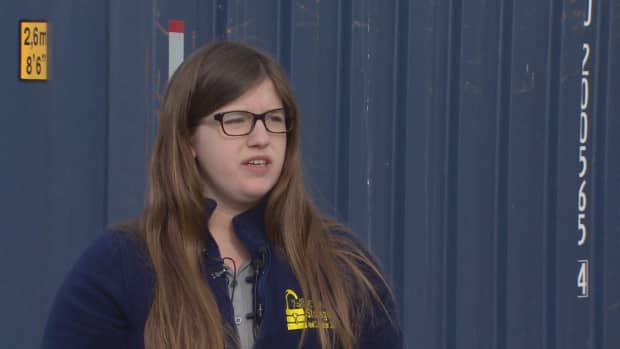 'As family you don't really expect ... that to happen'

3 years ago
1:15
Shannon Baxter discovered her mother had defrauded the family's container business thousands of dollars while reviewing invoices. 1:15

Hoping it will help prevent other Edmontonians from falling victim to financial crime, Shannon Baxter is sharing her experience of discovering that her mother had defrauded the family business.

"I want to help this not happen to others," Baxter said at an Edmonton police Fraud Prevention Month news conference Monday.

Baxter was 18 and attending business classes at NAIT while working at the family business, Yellowhead Storage, when she discovered her mother, the manager at the time, had been committing fraud.

Baxter started helping out with invoices and sales.

When she found an invoice for a company that didn't exist, Baxter confronted her mother with the paperwork.

"I thought at the time of looking for this gentleman that he had given her false information and took the containers without paying," Baxter said.

Her mother admitted that she had established a shell company called West Yellowhead Transport and had been taking and selling the containers between April 2013 and February 2014.

"My mother was never someone that I would have expected to do something like that," Baxter said. "She was always very kind and generous. And I don't know. Something changed, I guess."

Baxter said she was angry at her mother.

"As family, you don't really expect something like that to happen," Baxter said. "My father put a great deal of trust in her."

After admitting to fraudulent profits of more than $153,000, Baxter's mother struck an arrangement with Baxter's father to pay back the money she owed. She was convicted in January of this year and sentenced to 15 months in jail.

Police estimate the family company, Stankay Holdings, lost an estimated $360,000 through the scam.

Edmonton police Det .Linda Herczeg said Baxter, who took over managing the company, is an inspiration.

"She was attending NAIT, taking business classes, and put aside her education to come and help the company get back on its feet and put it back together," Herczeg said. "She's strong and she stood by it."

Herczeg said the market across Alberta took a hit as Baxter's mother had priced the containers below wholesale cost.

Herczeg said such economic crimes are just as likely to happen in family-run businesses as they are in companies where employees are not related.

"I think a lot of it depends on the availability in and of itself to commit the fraud," Herczeg said, pointing out Baxter's mother had access to the company's sales and finances.

"There was nobody overseeing her writing the invoices and moving the money. Because those checks and balances weren't in place, it allowed her to create that fraudulent act."

Baxter has introduced basic business procedures, security cameras, digital systems and file back-up processes to ensure the safety of all employees and the business.

There is also a new system in place that ensures the shipping containers in the yard are physically counted once a month.

Just be cautious. Put in that extra work to monitor your staff.- Shannon Baxter

"Just be cautious. Put in that extra work to monitor your staff. Do the sign-out sheets and the paper trails. It seems like a lot, but in the end, it could really help you out," Baxter said.

In 2017, the EPS economic crimes section reviewed 44 financial fraud files, with more than $176 million in losses.

However, once all the investigations are concluded, police anticipate the actual losses could be double that value — in excess of $352 million.

Checks and balances are important, Herczeg said, adding a minimum of one or two people should watch over those doing invoicing.

"It's not that you want to take away that element of trust and it's not that we don't believe in people. We still have to establish that and we still have to maintain that moving forward. I think it's one of those things where you do it for the betterment of everybody," Herczeg said.