Within Edmonton city limits is a dinosaur graveyard containing 15 Edmontosaurus and Albertosaurus skeletons. For world-renowned paleontologist Philip Currie, digging up dinosaurs in his own backyard is as "iconic as you can get in Alberta."

'If I wasn't able to travel anymore ... it wouldn't matter, 'cause here in my own backyard I have dinosaurs'

Philip Currie pushes a wheelbarrow loaded with dirt through the bush in a south Edmonton ravine.

It's the kind of grunt work you wouldn't expect one of the world's top dinosaur hunters to be doing.

But the 68-year-old Edmonton-based paleontologist believes in teaching by doing and unearthing fossils takes a combination of perseverance and painstaking manual labour.

At the age of 12, growing up in southern Ontario, Currie dreamed of becoming a paleontologist in Alberta.

"The bizarre story is I ended up doing exactly that," he said.

The University of Alberta professor and Canada Research Chair in Dinosaur Paleobiology is responsible for finds or research on all seven continents.

This month alone he's had two high-profile academic papers, one on giant dinosaur eggs unearthed 30 years ago in China and a second on the discovery of a new species of feathered dinosaur, also in China.

The international discoveries add to his reputation in Canada which culminated in the opening of the Philip J. Currie Museum near Grande Prairie in 2015.

"Opportunities to build the (Royal) Tyrrell Museum (and) the new museum up in Grande Prairie, we've had opportunities to work internationally, these are all things that weren't in my game plan originally," admits Currie.

What was always part of his game plan was to do field work alongside others who share his passion for discovery.

For the past 14 years Currie, other University of Alberta staff, and students have been working in the Danek Bonebed at a bend on Whitemud Creek uncovering 15 skeletons of Edmontosaurus and Albertosaurus.

The quarry is named after the local sculptor Danek Mozdzenski who stumbled across a bone sticking out of a bank while on a walk in 1989.

"It's about as iconic as you can get in Alberta and it's still fascinating to me," Currie said.

That fascination is shared by 10 budding paleontologists at the site including graduate student Matthew Rhodes.

"It's an opportunity to gain some experience digging up fossils and every discovery is truly a new find. Everything that we uncover is the first to be seen by human eyes," Rhodes said. 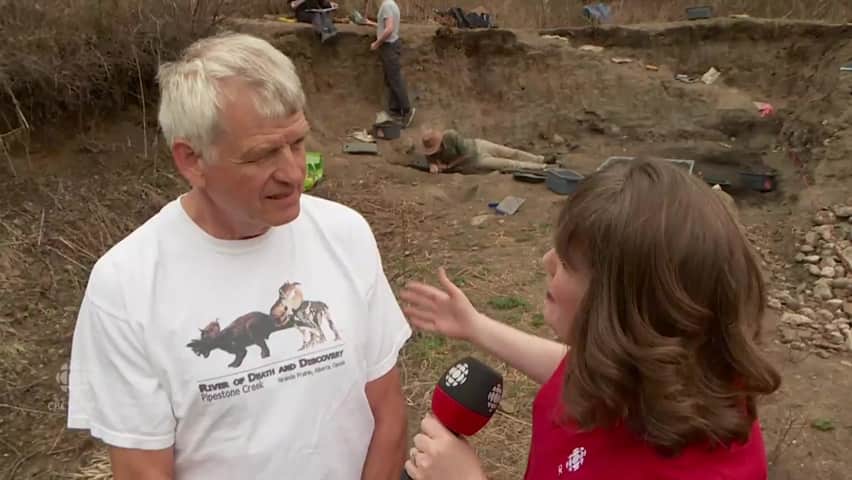 4 years agoVideo
4:33
Philip Currie, University of Alberta professor and Canada research chair in dinosaur paleobiology, reflects on some of the most interesting finds of his career, including this Edmonton dig site. 4:33

After hunting for dinosaurs around the world for more than 40 years, Currie's enthusiasm for crouching down in the dirt, unearthing new discoveries is undiminished.

"If I wasn't able to travel anymore to work in these exotic places it wouldn't matter, 'cause here in my own backyard I have dinosaurs and that's all I need."