For those who dare ride high, the replica antiques offer nostalgia and thrills

Unaccustomed to riding high and trying to navigate the steep hills of San Francisco, he ran a stop sign and nearly crashed into a building.

"You have to give up your fear of being in high places," Mitchell said in an interview with CBC Radio's Edmonton AM.

"It's very stable once you get going fast. It's the stopping part that maybe sometimes is a bit of a challenge.

"You pedal backwards and hope for the best and watch ahead far enough so you don't get yourself in trouble."

Potholes are usually the beginning of the end of the ride.- Doug Mitchell

The design of the direct-drive bicycles, also known as high wheels, dates back to the 1800s.

The front wheel is more than triple the size of the rear and usually measures about 52 inches in circumference, putting riders head and tails above conventional cyclists.

Riders must use a step to mount the bike. The bars are usually moustache-shaped.

The bikes do not have gears or brakes.

"They stopped making them in 1880 because they're very dangerous," Mitchell said. "They're very top heavy."

High winds are a challenge. Any bump in the road can be treacherous.

"Potholes are usually the beginning of the end of the ride," he said. "Once you hit the pothole, you usually end up going over the handlebars and crashing.

"You're not very aerodynamic either, so in a windstorm you're a bit like a sail." 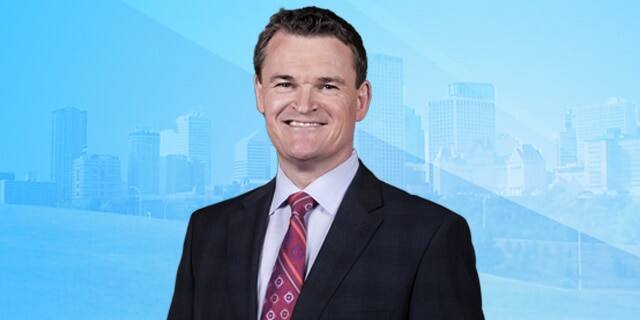 Edmonton AM5:13Penny-farthing bicycles in Edmonton
They're bicycles, but they're far from ordinary. We meet a group of Edmontonians embracing a symbol of the Victorian era. 5:13

Despite the inherent dangers, Mitchell is passionate about penny-farthings. Since that ill-fated first lesson in San Francisco seven years ago, he has been riding them almost every day.

He is among a growing cohort of Edmontonians riding the replica bikes.

Mitchell and his friends take their high wheelers out for a spin every Tuesday night on the streets and river valley trails.

The riders like to turn heads in "dapper" attire such as bow ties and top hats.

"We've had people stop us and they want to get their picture taken," he said.

"They always yell, 'How do you get on that thing? And we always yell back, 'We don't know how to get off.' It makes for a laugh.

"Lots of people really seem to get a thrill out of seeing us riding by and honk the horn. It's a lot of fun."

Mitchell attends an annual race in Frederick, Md., which sees thousands of riders run laps on the lopsided cycles before retiring to the beer garden for refreshment.

He was ranked first in the most recent competition and likes to call himself the No. 1 Canadian champion, but he considers the rankings a "bit of a joke."

Mitchell wants to see more Edmontonians spinning their wheels on the replicas.

He now has seven of the bikes, custom-made and imported from Sweden, and he's offering lessons to cyclists who want to learn.

Brent Pellegrini, one of Edmonton's novice riders, purchased his custom penny-farthing from Australia about a month ago and can often be spotted riding through the Ritchie neighbourhood.

He doesn't expect he will be competing any time soon.

Learning to get on the bike was a challenge. He's figured out how to brake with his foot but he still hasn't mastered sharp corners and worries about how the smooth tires will handle on wet roads.

He describes Mitchell and his fellow racers as "pretty hardcore."

Even so, he gets a thrill out of riding high and figures it's a great way to "hopefully" get in shape.

"It stands out a bit," he said. "Something about it is cool. You get a great view.

"It's actually quite calming, quite relaxing. There's no chains or anything to make any noise so it's quite quiet. I really enjoy it. I'm hooked."