City council chambers were cleared this afternoon and the debate over Uber ground to a halt after taxi drivers began chanting "shame, shame."

City council chambers were cleared this afternoon and the debate over Uber ground to a halt after taxi drivers began chanting "shame, shame."

The outburst among drivers started after council voted down a motion to postpone the debate until after the Ward 12 byelection is held on Feb. 22.

Earlier, dozens of drivers packed the council chamber after holding a quick rally outside. Mayor Don Iveson urged drivers to allow council to debate the proposals. He told one man who made comments from the gallery that he would be removed if he kept it up. 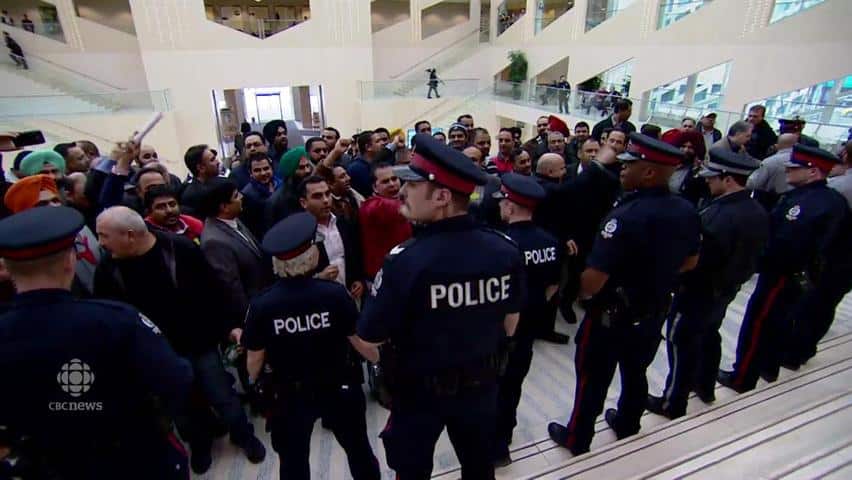 When order could not be restored, the chambers were cleared and all representatives of the media and the public were told to leave. Some drivers were locked in a standoff with police but left after they were told they could be arrested for trespassing.

The meeting resumed about an hour later with only media, city staff  and councillors allowed inside. Uber representatives were kept outside with the drivers.

Drivers shouted "we want to go in," as police formed a line, preventing the public from entering council chambers.

Mnjinder Punia, one of the drivers, said his group was protesting peacefully, and there was no reason they should not have been allowed back in.

"It's a black day for democracy," Punia said.

Mayor Don Iveson said police made the decision to keep people out of the meeting once it resumed and said it was "regrettable" that measure had to be taken.

"It is a public chamber, as long as people are behaving in a responsible way and not disrupting the actual business of democracy," he told reporters afterwards.

Havoc at council. Councillors retreating to the back. <a href="https://t.co/Nbg5YqUsRn">pic.twitter.com/Nbg5YqUsRn</a>

Councillors are looking at recommendations that could transform the taxi industry and make Edmonton the first Canadian city to legalize Uber.

In a report prepared for today's meeting, administration recommends the city deregulate taxi fares for pre-arranged trips to allow drivers to compete with Uber drivers.

Regulated fees would only apply for vehicles that are flagged from the curb or at cab stands. After a couple of hours of debate, councillors passed an amendment that sets a minimum price of $3.25 per ride for Uber and taxis hailed through an app to avoid predatory pricing.

When the debate continues Wednesday, councillors will consider whether they should set a maximum rate. Coun. Michael Oshry suggested limiting price surges to four times the regulated rate.

Uber is opposed to any minimum or maximum rates.

"While city council's move today to establish fare minimums would allow us to continue to operate in Edmonton, additional attempts to set maximum or minimum rates would be unworkable and could prevent further innovation like uberPOOL," the company said in a written statement.

"There are no ridesharing regulations in the world that place a cap on prices, because regulators want to ensure reliability for riders and consumer choice. Uber continues to encourage city council to adopt the recommendations presented by city staff. "

Council has been trying to deal with Uber ever since it started operating in Edmonton a year ago.

The company, which allows users to hail drivers using a smartphone app, has openly challenged the city's vehicle-for-hire bylaw.

But taxi companies and drivers have pushed back against Uber, arguing the company doesn't play by the same rules or incur the same costs as other taxi firms.

The report also recommends the city should charge a licensing fee to Uber, instead of levying the fee on individual drivers.

Uber drivers will have to carry commercial vehicle insurance. The Alberta superintendent of insurance has warned that personal insurance policies are not sufficient to cover passengers in the case of a collision.

Two insurance companies are working on policies for Uber drivers but they still haven't been approved for use in Alberta.