Edmonton is closer to getting a revamped bus system after council’s urban planning committee agreed that council should vote on it at their next meeting Nov. 26.

Edmonton is closer to getting a revamped bus system after council's urban planning committee agreed that council should vote on it at their next meeting Nov. 26.

After a full day of discussion and feedback from transit users at city hall Tuesday, Mayor Don Iveson suggested it's time to make the change.

"I think we need to move ahead after all the work that we've done," Iveson said. "We could study it to death for another five years but I think we've got to get on it with it."

Iveson made the comments after the committee heard from nearly two dozen speakers earlier in the day.

"The City of Edmonton's bus network is broken, we heard that from users today and I've felt that for some time."

Transit users sent a clear message when they filled the council chambers to complain about the proposed bus redesign slated to start in August 2020.

The most common gripe is the cut in routes: The overhaul sees the number of routes go from about 240 to about 140.

The goal is to run the existing buses more frequently.

More than 20 people signed up to speak at the urban planning committee to express concern about several elements of the proposed network.

Ryan McKay lives in Westridge and walks about two minutes to an express bus stop, where he catches it to commute to work downtown. He's not pleased with the redesign.

"With the proposed changes, the closest usable bus for me is almost a 30-minute walk and that then takes me to yet another bus, which would then eventually get me to the LRT."

The report says the majority of riders will have a longer walk — up to 200 metres more — to the nearest bus "with a small group of riders experiencing an increase of more than 600 metres." 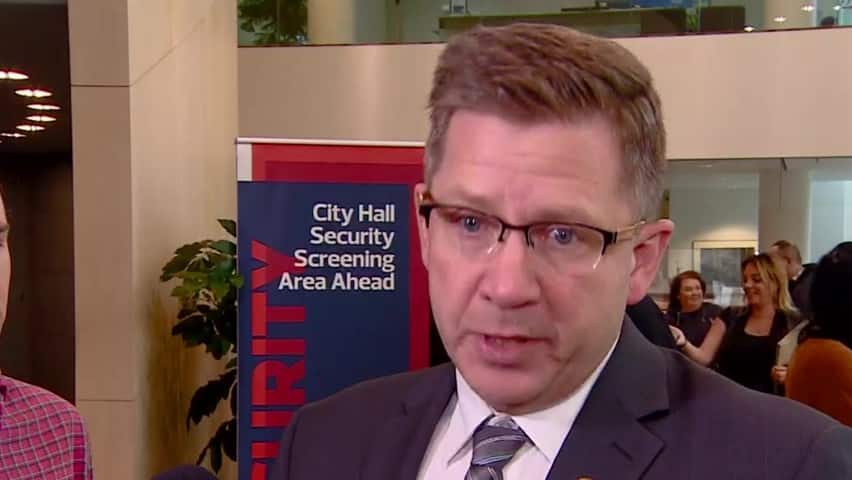 'We're leaving some people behind'

McKay said that with the redesign, he'll have no choice but to drive, as he did previously before he discovered the express bus.

"I was cursing and swearing about how bad traffic is, and all of a sudden I've got a personal driver and I can get work done and I don't have to worry about traffic."

Eileen Mardres lives in Tegler Manor in Oliver, where the community bus 309 is being combined with another route and is not scheduled to stop in front of the seniors' residence.

She said the community buses like the 309 are necessary for seniors to get to vital necessities.

"They go right to the door of things like the grocery store," she said. "A lot of people may be able to go two blocks if it's flat, clean, dry, no ice, but to walk across a slushy parking lot and then to carry their groceries back across it? No, it's not going to happen."

Many people use walkers and would have a difficult time fitting on a passenger van, she added.

Along with sending the bus reports to the next council meeting, Iveson asked Edmonton Transit Service (ETS) staff to report back in February on the costs of running an on-demand 15-passenger van service over 24 months.

Several versions of an on-demand service are outlined, from maintaining current service in peak hours only for about $5.2 million to providing full in existing and new areas for $10.3 million.

The union opposes the city's plan to use private companies to provide on-demand pick up and drop off service.

Sarah Feldman, director of planning and development with ETS, said the on-demand service would provide more flexibility for picking up and dropping off passengers.

"If we were to deliver this option, it would need to be delivered through a contracted service model," Feldman told the committee. "We don't have the vehicles or the garage capacity in the immediate term."

Customers would book a trip using a phone app, online web portal or a phone call. The driver would pick up passengers from designated stops within a community and take them to the nearest transit centre or bus stop.

President of the ATU, Mark Tetterington, disagreed, arguing that transit staff can provide the service publicly.

"Accountability, safety, training," Tetterington said of the benefit of the union running the on-demand service. "I believe everyone should have public transit, we're all taxpayers."

Coun. Andrew Knack champions the new network to help increase ridership, which the city now says is at 13 per cent, up from nine per cent as posted in a report posted online Monday.

Coun. Bev Esslinger asked ETS managers to make sure the city launches a "robust" communications strategy so the public understands the changes to the bus system.