Edmonton's Citadel Theatre production of Shakespeare's The Tempest expected to cast deaf actors and actresses to fill half of its roles. 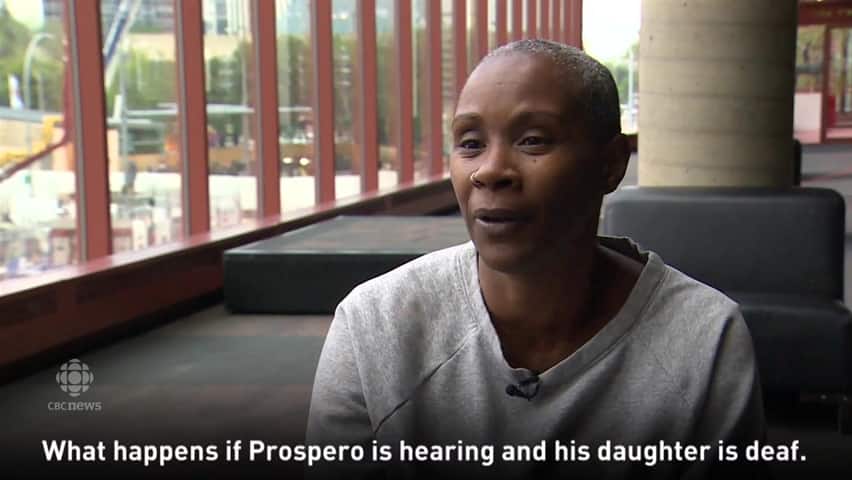 'One day there will be a deaf director doing this'

An upcoming Citadel Theatre production of The Tempest featuring deaf and hearing actors is a part of a movement to put deaf audiences and performers into the limelight.

As opposed to having a traditional sign translator on the side of the stage, this version of the Shakespeare play will have sign language and spoken English interpreted to the audience by the cast.

Josette Bushell-Mingo, of Sweden's National Deaf Theatre, will direct the production, a re-imagined version of the play where Prospero's daughter Miranda is deaf and the two aren't able to communicate clearly.

Daryl Cloran, the Citadel Theatre's artistic director, said this is the first of its scale for the Citadel in terms of partnering with deaf actors and actresses..

"My hope is it's a step toward a Citadel that's very inclusive both for deaf artists and deaf audiences," Cloran said.

"Having Josette as our director, someone who has lead a deaf ensemble for many years in Sweden, is really going to help us make something really unique."

The production doesn't go live in Edmonton until April but auditions have been, or will be, held in Edmonton, Vancouver and Toronto.

While a play using deaf actors may be new for the Citadel, it's not for Bushell-Mingo. She has an excitement and passion for the production and wants to make sure it's not just a one-off featuring deaf actors in the city.

"It's not cool. It's somebody's language. It's not cool, the deaf culture. It is a person's culture and I think the intersection of those dialogues will come through the production."

Of the 14 actors required for this version of The Tempest, she's hoping at least half will be deaf. She also hopes to get deaf people to be involved with the behind-the-scenes work. If it leads to more opportunities for deaf people working in the arts in the city, she'd be very happy.

"This is a starting point," said Bushell-Mingo. "That the deaf community will see this as a home that they can come to, a place where they can create work, that more collaborations will happen."

Chris Dodd, a deaf performing artist and playwright based out of Edmonton, has been writing plays that incorporate deaf characters and works with professional theatre companies across Canada. He's also the director of Canada's national deaf theatre festival SOUND OFF.

He's planning to be involved in the Citadel's The Tempest as an actor and consultant.

"I think it is fantastic and an important step forward," Dodd said. "I strongly believe that the way to success and support for deaf artists, whether emerging or established, is to partner and collaborate with professional theatre companies.

"It is wonderful for a theatre of the Citadel's calibre to embrace and integrate deaf performers into their production and it goes a long way to raising the status of deaf performers and increasing public awareness of what these actors do. Opportunities like these are invaluable."

Dodd believes Canada lags behind other countries when it comes to developing and supporting deaf theatre, though there have been some small forays over the years. He hopes this play will lead to something more permanent and that the local audience will be introduced to talents they've overlooked.

Edmonton audiences will have exposure to deaf performers on stage ...- Chris Dodd

"Edmonton audiences will have exposure to deaf performers on stage and will be able to appreciate richness and expressiveness that comes from the use of American Sign Language in performance, especially when it comes to presenting Shakespeare's words," Dodd said.

The Tempest is being touted as the Citadel's flagship production for its upcoming season. It plays from April 20 to May 12.