Nine months after his death, a fundraising campaign is underway to buy a headstone to mark the grave of a homeless man who became known throughout Edmonton for his artwork. 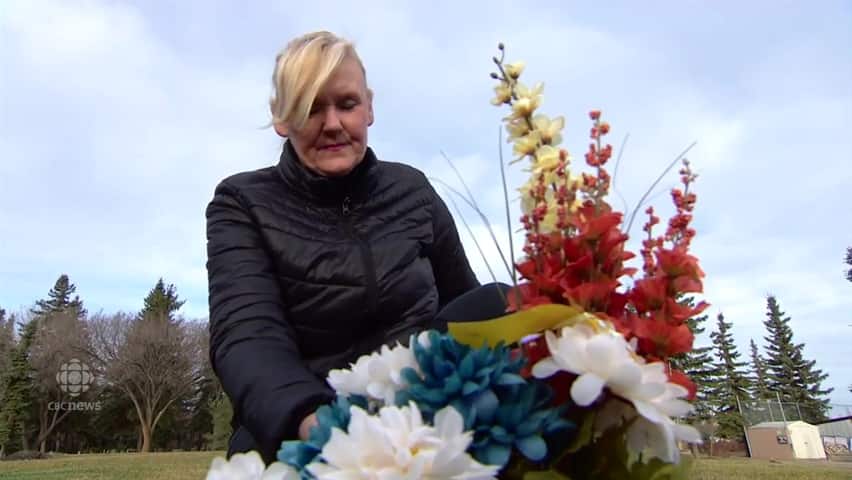 'He needs to have a headstone'

3 years agoVideo
1:08
An Edmonton woman who became friends with a homeless man known for his art is trying to raise money for his headstone 1:08

Every time she visits the cemetery, Debb Cooper wishes there was a gravestone for the homeless man who became one of her closest friends.

She goes several times a week to the plot where Sterling Gauthier's ashes are buried.

But the only way she can find the spot is by following flowers she put down on the grass.

"It hurts me when I come here," Cooper said. "It just feels empty."

Gauthier, who lived and died on the streets of Edmonton, made a name for himself with his striking paintings.

He sold them throughout the city, but most people didn't know about his inspiring talent until the media coverage after his death.

"He loved his art, he lived for his art," Cooper said. "It was an escape for him into something more beautiful."

She talks to Gauthier when she visits his grave in west Edmonton. She tells him she loves him and misses his sense of humour.

Gauthier was 36 when he collapsed on a city bus in January and later died in hospital.

Nine months later, Cooper has started a fundraising campaign to buy a headstone to honour her friend.

"I just feel like Sterling was abused in life, and I don't want him to be abused in death," she said. "I want him to go out with a headstone."

She first struck up a conversation with Gauthier one day when she saw him painting downtown. It's hard for her to describe now why they became so close.

She quickly figured out he was vulnerable and struggling with a deep-rooted drinking problem that often made him sick.

She worried about him sleeping on the streets, and in makeshift river valley camps.

But there was something special about him that created an unbreakable bond.

He gave her paintings of some of her favourite animals.

"If you got to know him, he was really funny, had a great sense of humour, and was very, very loving," she said.

Gauthier is something of a legend among Edmonton's homeless population along Whyte Avenue, where he spent a lot of time, and throughout inner-city agencies.

"People on Whyte Avenue knew about him," Cooper said. "He tried to sell his art all the time, and there were galleries who wanted to show his art."

The pair bumped into each other when Tyler, on a tour stop in Edmonton, was walking his dog in the river valley.

Cooper has a headstone already designed but said her $3,000 goal is off to a slow start.

She's getting help promoting her gofundme campaign from a number of agencies that worked with her friend.

Others who never knew Gauthier are also contributing, moved by his story.

Cheryl Whiskeyjack, with the Bent Arrow Traditional Healing Society, said she see Cooper's campaign as an act of reconciliation, given that Gauthier was originally from the Sagkeeng First Nation in Manitoba.

"If you go to any cemetery, everybody has a headstone, right?" Whiskeyjack said. "But he doesn't. That gravestone tells a story about a person who was here, and a person who mattered."

Cooper said some of the most loving  people she has met are homeless. She wants everyone to know that Gauthier tried hard to get away from the alcohol he knew was slowly killing him.

But while he never pulled that off, she said his legacy should commemorated by his artwork and his charismatic personality.

Raising money through a gofundme page for a headstone is another way to bring dignity after death to someone who never quite fit into society but still contributed so much.

"He brought a lot to the city with his art, and he made a lot of people laugh. He's at peace now."