An archaeological dig in Edmonton's Mill Creek Ravine opened to the public Saturday. 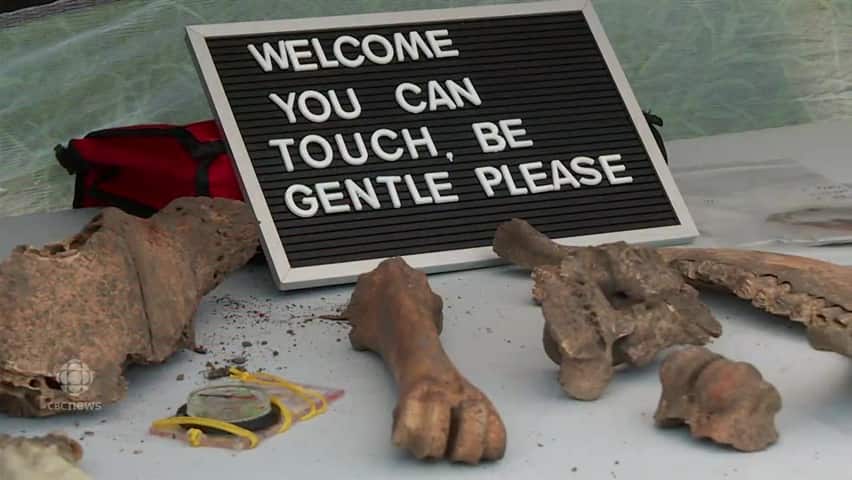 4 years ago
1:52
An archaeological dig in Edmonton's Mill Creek Ravine opened to the public Saturday, offering a glimpse into the treasures found in our own backyard. 1:52

Archaeologist Haeden Stewart crouches next to a pit full of bones, a grave-like hole in Edmonton's Mill Creek Ravine.

"Your heads and your feet and your lower legs are getting tossed in here," he says.

They're discarded animal bones from a meat packing plant, he clarifies.

Stewart launched the dig site last summer to research the industrial history of western Canada for his doctoral thesis.

More than 100 years ago, the Vogel's Meat Packing Company transformed the ravine into one of Edmonton's earliest industrial sites.

Workers lived in a nearby shantytown until the city converted the area to park land in the 1920s, Stewart explained.

The meat-packing plant fell apart and sank back into the earth, but various objects and other signs of the era were left behind. Stewart is unpacking them, slowly piecing together the stories of people that might otherwise never be told.

"A lot of people may know part of this history but it's getting at the stuff that you never really think about and that's what archaeology is all about," he said.

"It's trying to get at the lives of people that don't make it into the history books."

Since starting his dig, Stewart says he's found more than he ever expected — he has unearthed century-old animal bones, bricks, bottles and tools.

"It's all ground and you start digging in it, and all this stuff starts popping up."

On Saturday, Stewart opened his workplace to curious Edmontonians.

Stewart and members of his archaeological team toured families around the site, teaching them about the workers history forgot.

"We're trying to add a little nuance to the historical record," Stewart said.

"When you can get people to come down and see what we're digging up, that really can make people think a little more about the history of Edmonton and the people who are nameless on the historical record."

Aryana Raj, 12, visited the site with her family.

"You could find things that you never knew were there."

When asked if she plans to take a shovel to her backyard, Raj grinned and replied "maybe."

"Archaeologists don't only dig for dinosaurs, they also dig for things that tell people about ancient human history," she said.

The Mill Creek archaeological project wraps up in August. Artifacts will then be transferred to the Royal Alberta Museum.