One death is one too many, MADD says at launch of red ribbon campaign

Allison Tatham has seen the television commercials by Mothers Against Drunk Driving depicting the tragedy of losing a loved one but never thought she'd live through that same experience.

Four killed, 170 injured each day by drunk drivers in Canada 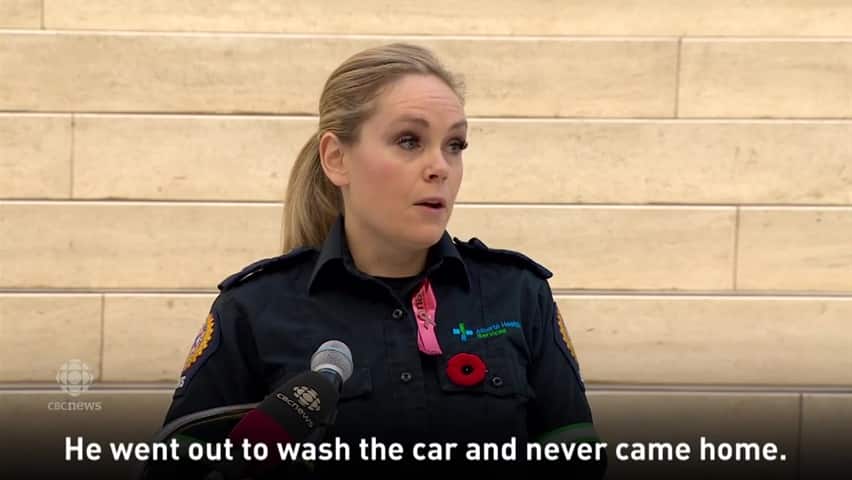 'He went out to wash the car and never came home'

4 years agoVideo
1:00
Allison Tatham describes how her father was killed by a drunk driver at the MADD red ribbon campaign launch. 1:00

Allison Tatham's father went out to wash the car that morning.

He never made it home.

"At 7 a.m. on a beautiful Sunday morning, two police officers went to my mom's home to tell her that her husband, my dad, the family rock, had been killed by an impaired driver, and ripped from our lives in an instant," Tatham said at City Hall on Friday at the launch of the Mothers Against Drunk Driving red ribbon campaign.

In June 2014, a man with a blood-alcohol level 3.5 times the legal limit hit her father's vehicle from behind at 100 km/h, Tatham said.

"My dad was killed instantly."

The red ribbon campaign, which runs from Nov. 4 to Jan. 5, 2017, is a reminder to drive sober, said Jason Hills, president of MADD's Edmonton chapter.

Driving drunk is not an accident but a decision someone makes, said Hills.

At a time when rides can be summoned with the touch of a finger on a smart phone, Knecht said it's "baffling" that people still drive while impaired.

"Unfortunately, this is a problem that isn't disappearing," he said. "In fact, I would say it's increasing."

So far in 2016, Edmonton police have made 1,134 impaired driving arrests, Knecht said.

Four people are killed and 170 are injured each day by impaired drivers in Canada.

Tatham said her family has pledged not to become "just another statistic" but instead to advocate on behalf of victims.

"As victims of impaired driving," she said, "this statement is always clear: if we can save even one family, we will continue the fight."
CBC's Journalistic Standards and Practices|About CBC News
now