'How can one bear that pain?': Family shattered after 3 members drown in Alberta waterfall

Partab Rai Oad, his wife, Venjhar Oad, and their nephew, Anoop Kumar Oad, died at Crescent Falls near Nordegg when they were pulled under by the strong current.

Warning: This story includes graphic content that some readers may find disturbing.

The drowning deaths of a mother, father and nephew who were swept under a powerful waterfall in west-central Alberta on Tuesday have left their family shattered.

Partab Rai Oad, his wife, Venjhar Oad, and their nephew, Anoop Kumar Oad, died at Crescent Falls near Nordegg when they were pulled under by the strong current.

Anoop's cousin, Vipin Kumar Oad, said the tragedy has left his family in "parts and tears."

"It's really a terrible time for all of us," he said in a message to CBC News. "That news is heart-wrenching. It's so hard to bear the pain of losing loving ones.

When loved ones suddenly die, how can one bear that pain?- Vipin Kumar Oad

"It's hard to stay strong when someone loses their brother, son, father, mother or daughter. When loved ones suddenly die, how can one bear that pain?"

The family members were swimming at the base of the falls, cooling off from the heat, at around 8 p.m. Within minutes, all three were dead.

Anoop, 25,  an exchange student from Pakistan, was swept under first. Partab and Venjhar, both 38, ventured into the water to save him.

The Edmonton couple was pulled under as their children watched in horror from the banks of the Bighorn River.

The three children — two sons aged six and 10, and a three-year-old daughter — screamed for help.

A video shot by Partab shows Anoop wading into the water up to his chest before he disappears under the crashing falls.

On the video, provided by the Oad family, one young boy starts screaming. Venjhar waves her husband over before the camera drops to the ground and the video abruptly ends.

CBC has chosen to show a portion of a video taken before the accident, in order to show the context of the scene, including the power of the waterfall and the river.

Warning: This video shows shows the family before the accident and contains images that viewers may find disturbing. 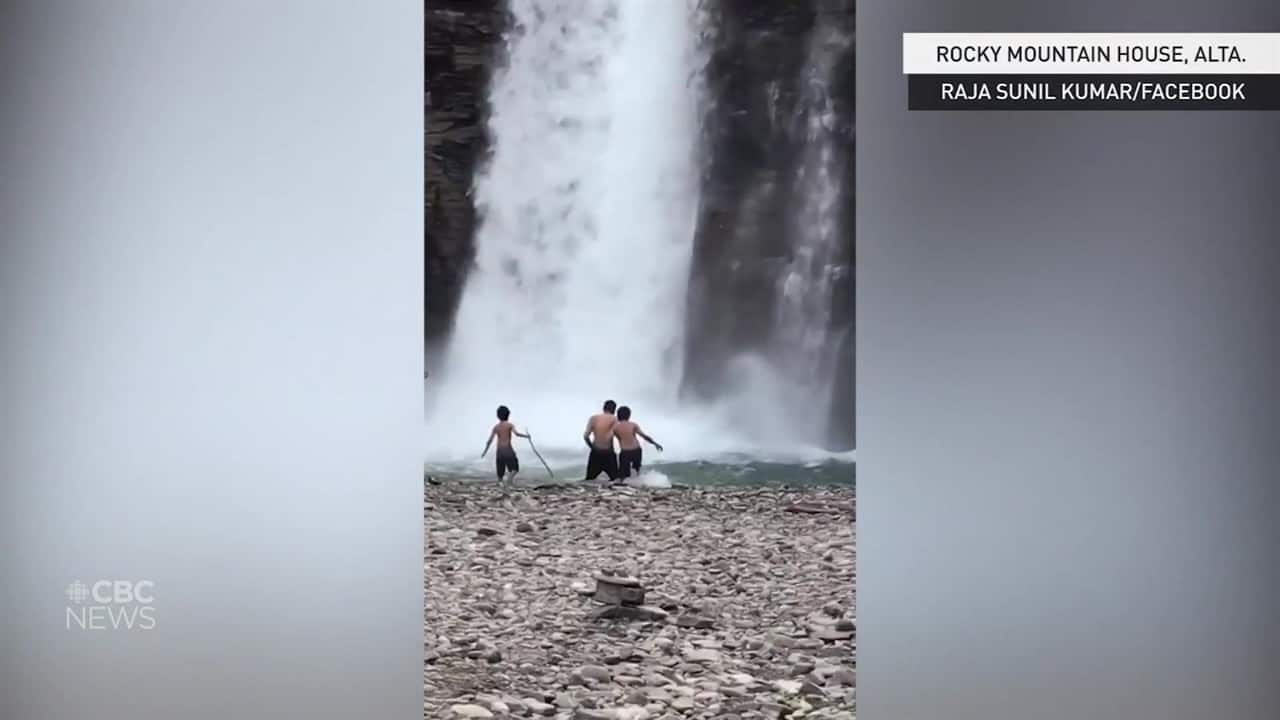 2 months ago
0:11
Warning: This video contains images that viewers may find disturbing as it shows a family at Crescent Falls on Tuesday before Partab Rai Oad, his wife Venjhar Oad and their nephew, Anoop Kumar Oad, drowned. 0:11

Other people in the area found Partab and Venjhar and tried to resuscitate them. Search and rescue teams were called to the scene within minutes.

Anoop was studying engineering at the University of Alberta. Partab was a medical doctor in Pakistan before immigrating to Canada. In Edmonton, he worked as an airport security guard. Venjhar, who went by the nickname Sonam, worked as a bank teller.

Vipin said his cousin was sucked into a hole among the rocks, his body hidden under the water.

"Partab and his wife went to rescue him, but unfortunately they all lost their lives in front of the children."

"May God Almighty help all. They were amazing, intelligent, obedient, and charming people."

Vipin said there should be more warning signs posted in the area to warn people of the danger.

Monica Ahlstrom, who led the search team during the incident, said the falls can be deceiving for those unfamiliar with the area.

"It's a more powerful waterfall than people believe, and the hydraulics there are significant, so it was a challenge," she said of the search and rescue operation.

"In the back of everyone's minds [was], you know the tragedy that unfolded and how vast it was. Normally we're dealing with maybe one or two people. But this was a whole family that's been traumatized by this event."

Ahlstrom, president of Search and Rescue Alberta, said there are warning signs in the area, but it's easy for visitors unfamiliar with the mountainous region to overlook the dangers.

"It's a wilderness area and you need to come prepared for it ... the whole area can be dangerous."

"I've been thinking about this a lot, and I think it's more of a matter of educating people because signs don't always work."

Vipin considered his cousin a brother. Anoop was the eldest son of his father's twin brother and they grew up together in Pakistan.

They had parted ways last year when Anoop set off to university in Canada. They were planning to reunite during a trip to Thailand next year.

All of those plans vanished in a few seconds, said Vipin, who is taking solace in his strong Hindu faith that he and his cousin will be reunited.

"We were brothers and very close friends. Anoop, I hope soon we will be together again in the next world. I love you little one."

Crescent Falls is a series of two waterfalls on the Bighorn River.

Crescent Falls Viewpoint is a popular provincial campground and picnic area near Nordegg, about 90 kilometres west of Rocky Mountain House.

With files from CBC's Natasha Riebe