Downtown Edmonton exploring how businesses can respond to panhandling

The Downtown Business Association has teamed up with Boyle Street Community Services to teach businesses how to respond to panhandlers.

Before coming out of homelessness, he occasionally asked strangers for spare change on Jasper Avenue and Whyte Avenue.

"From my point of view, a lot of businesses are kind of rude to homeless [people] and those that are struggling because they don't understand," Wolfleg told CBC News.

Panhandling in and around businesses is a complex issue — one that requires balancing the needs of vulnerable people and business owners, said Ian O'Donnell, executive director of Edmonton's Downtown Business Association. 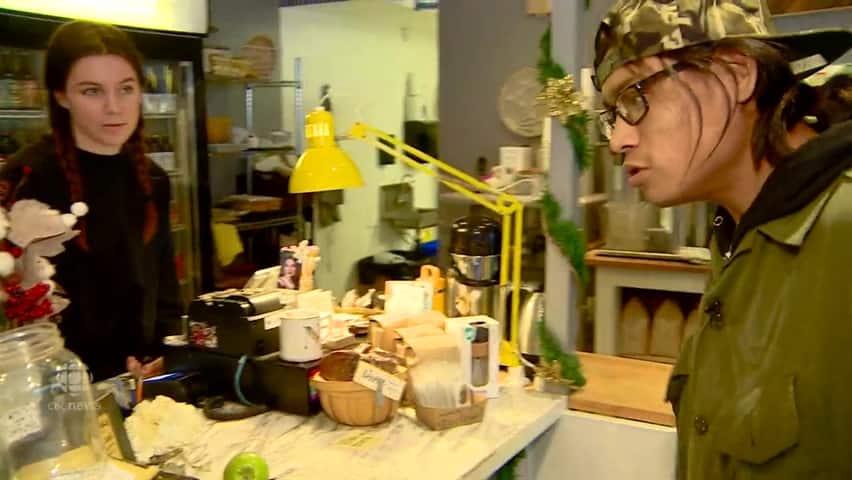 'We all want to see an end to panhandling'

2 years ago
1:50
Downtown businesses are looking to better tackle problems around panhandling. 1:50

A survey conducted by the association in July found panhandling was the primary safety concern for downtown residents and for those who work downtown, with 57 per cent of respondents indicating they're more worried about panhandling than either homelessness or drug use.

Some business owners are frustrated by the disruptions panhandling can cause for customers, O'Donnell said.

"Certainly, private business owners on private property have the right to refuse service, and not just for panhandling — for any kind of activity that is not conducive to their business, whether that's aggressive behaviour or drunk and disorderly behaviour," he said.

Last month, a sign that read "zero tolerance for panhandling" was posted at Remedy Cafe on Jasper Avenue and 103rd Street after customers complained about being asked for money inside the business.

The backlash that followed prompted a conversation about how businesses can effectively respond to panhandlers, O'Donnell said. He connected with Boyle Street Community Services to discuss how the downtown business community can handle potentially challenging situations.

"We want to make sure people are educated and informed in a way that they can feel safe in urban areas, but also know how to respond and perhaps where to turn," O'Donnell said.

As early as next week, local businesses will receive information packages that explain who to call and how to react when a panhandler enters a place of business.

The messaging developed by Boyle Street and the Downtown Business Association is simple: treat vulnerable people like they're any other customer.

"As odd as it may seem, it doesn't always occur to everyone that that's how they should talk to someone who's street-involved or homeless or panhandling," said Julian Daly, executive director of Boyle Street Community Services.

"That is a really great place to start. It doesn't guarantee a positive outcome, but it's way more likely than if you start from an aggressive, angry, kind of confrontational place."

Since it opened in 2017, The Nook Cafe on 97th Street and 101st Avenue has committed to responding to vulnerable customers with compassion.

'We've met them with love and compassion'

Nook customers buy $3 buttons that serve as a token for a coffee or tea and a day-old pastry. A jar of buttons sits beside the till, so people who can't afford a warm drink can buy one with a button instead of cash.

"It gives people this dignity to be able to come in and use it like currency," said co-owner Lynsae Moon, noting the cafe hands out about 20 donated coffees a day. "They don't have to explain or justify why they might not be able to afford something to eat or drink."

The cafe has a no-panhandling policy, but Moon said enforcing the rule has rarely been a problem.

"We see very little in terms of actual panhandling because we have provided other options," she said.

"Because we've taken time to build a relationship with marginalized people, they're more responsive to those directions and those requests — because we've met them with love and compassion, not with hostility or rejection."

Moon and Wolfleg have become friends since he started using the donated-coffee program a year ago, while he was still experiencing homelessness.

"If we do not recognize that people in need are out there and we close our door to them, I think it exacerbates the problem," said Mulder, the principal investigator for NorQuest College's Building a Better Life Project. The project explores the benefits of relationship building.

Wolfleg said his friendship with Moon helped him hold onto hope during a difficult time in his life.

"It changes my perspective on society," he said. "You know, like knowing that someone still cares."

Anna McMillan is a reporter at CBC Edmonton. You can reach her at anna.mcmillan@cbc.ca