The pastor of the Grace Life Church in Parkland County has been charged with contravening Section 73(1) of the Public Health Act after police found the church over capacity on Sunday and people failing to adhere to physical distancing requirements.

The pastor of the Grace Life Church in Parkland County has been charged with contravening Section 73(1) of the Public Health Act after police found the church over capacity on Sunday and people failing to adhere to physical distancing requirements.

James Coates is scheduled to appear in Stony Plain provincial court on March 31, RCMP said in a news release.

He was issued a ticket in December, the news release said, and was arrested on Sunday and released with a court appearance date.

"Since early December the RCMP have been working with AHS in an ongoing investigation into the activities surrounding the non-compliance of the church," RCMP said in the release.

Police and a public health inspector went to the church on Sunday and determined that attendance was more than double the current restricted-capacity level, the news release said.

"As a matter of respect, the church proceedings were not interrupted by the RCMP, and Coates was co-operative with the RCMP following the end of the service."

Insp. Mike Lokken, detachment commander of Parkland RCMP, said police have ensured that the church is well aware of the conditions it needs to follow and has been afforded repeated opportunities to comply.

"In collaboration with AHS, we have now followed up with escalated enforcement," Lokken said in the news release.

Alberta reported 269 new cases of COVID-19 on Monday and five more deaths from the illness.

Four previously reported deaths have been determined not to have been COVID-19 related, so the net increase to the provincial total was one. That total now stands at 1,710.

Across Alberta, 432 people were being treated in hospitals for the disease, including 76 in ICU beds.

The daily case number hasn't been as low since Oct. 17, when 224 new cases were reported.

On Monday, the province eased restrictions on restaurants, gyms and youth recreation that were imposed late last year as infection rates and hospitalization numbers spiked dangerously.

Restaurants can once again serve in-person diners. Gyms can open for one-on-one training.

Restrictions on some recreational activities were also changed. Sports and entertainment-related activities can resume in schools, and young people will be able to take part in lessons and practices for team-based minor sports, though games are still prohibited.

Alberta's four-stage plan for easing restrictions is tied to hospitalization rates, with a minimum three-week lag between stages to allow time to assess the impact on case rates.

"Before we ease additional restrictions in the coming weeks, we all must be serious about following the guidance and measures in place to prevent cases from spreading," Dr. Deena Hinshaw, the province's chief medical officer of health, said Monday at a news conference.

"There have been recent events in some faith gatherings that indicate some are not taking these measures seriously. I want to reinforce these measures are mandatory, not optional, and that in Alberta we have made great efforts to make sure that faith communities can continue to meet in a safe way.

"Those who are not following current restrictions are breaking the law."

Since Friday, Hinshaw said, another 25 cases of the variant first identified in the United Kingdom had been detected in the province, bringing that total to 96 cases. Seven cases of a variant that first emerged in South Africa has also been confirmed in Alberta.

"Whether or not the variant strain becomes the dominant strain depends of course on our collective adherence to the public health measures," Hinshaw said. 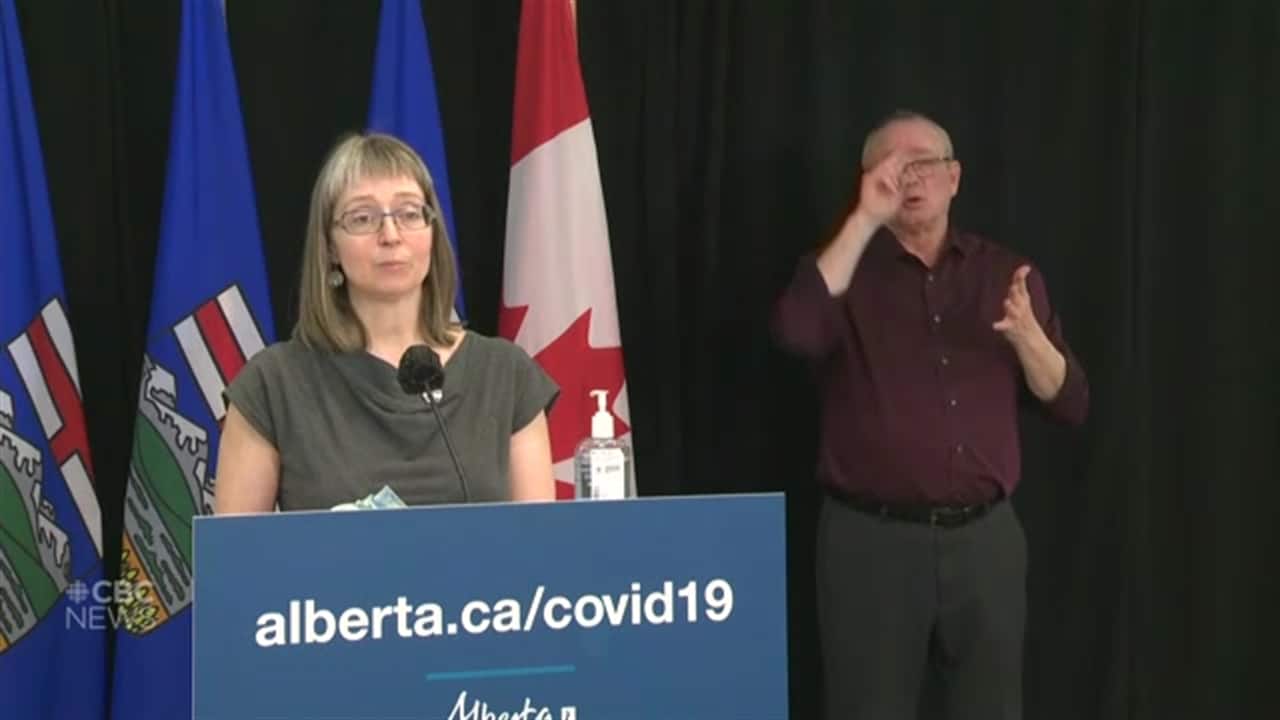 19 days ago
1:14
The threat of fast-spreading coronavirus variants means Alberta will be sticking to its carefully structured reopening plan, says Dr. Deena Hinshaw. 1:14

At present, variants account for less than half of one per cent of the province's cases, she said.

"It is concerning that we are finding more of them in the community without links to travel, but some of these are linked to each other," Hinshaw said. "So we are seeing some limited outbreaks where we are able, because of our testing protocols, to put in enhanced measures to stop the spread of these variants from moving further."

The province has dedicated a "highly experienced" contact-tracing team to tracking the variants and is double testing close contacts, and has also put in place additional isolation measures for those infected with the variants, she said.

If the variant starts spreading widely, that would impact overall COVID-19 numbers and the transmission rate, Hinshaw said.

Because case numbers have dropped, laboratories are now able to screen most, if not all, positive cases for the variants and do more intensive contact tracing and more intensive investigations, she said.

"And so the numbers that we have, while concerning, also give us an opportunity to make sure that we are suppressing any spread, and putting particular attention to minimize the chance that these variants spread further and become dominant."

Both Hinshaw and Premier Jason Kenney have said the reopening will be paused or rolled back if necessary.

'Take each step as it comes'

Step 1 moved ahead because there are fewer than 600 Albertans in hospital with COVID-19.

A decision on Step 2 is expected to be made on Feb. 28. If 450 or fewer people are then in hospital with the illness, restrictions will be further eased.

"The current plan is to take each step as it comes," Hinshaw said. "And of course we will continue to watch closely and determine if any adjustments need to be made. But I want to make sure that people are very clear that it's not just the hospitalization number that matters.

"It's also our trends of positive cases, positivity, and it's really important that we collectively continue to keep our positive cases trending downward.

"Because even if we have the hospitalization numbers that we might need, if our cases are going up, and they're starting to increase in a concerning way, then there may be a need to delay any kind of future steps, or we may actually need to take a step backwards, depending on those new case trends."