Active cases of COVID-19 in Alberta have been slowly declining over the past week but hospitalizations have continued to climb. 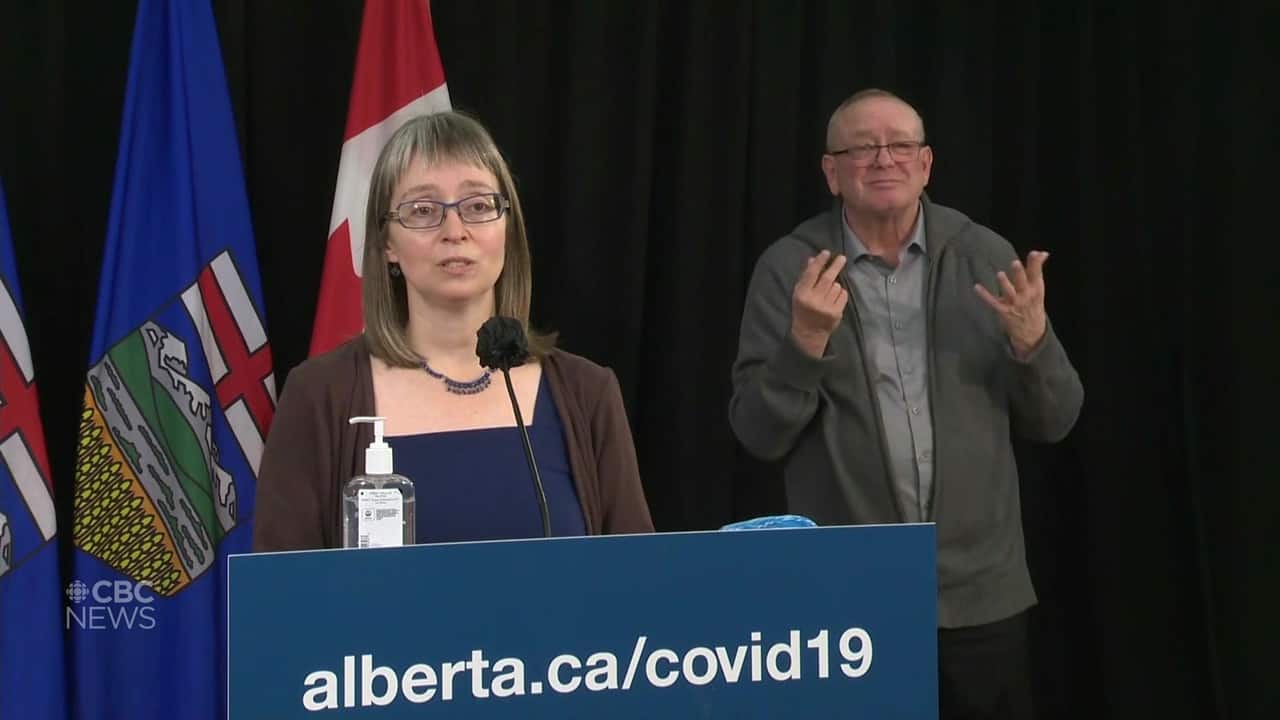 29 days agoVideo
1:28
Dr. Deena Hinshaw is urging Albertans to put themselves in the other person’s shoes first before reporting gatherings to the province. 1:28

The case numbers were compiled up until midnight on Sunday.

A total of 860 people have now died from the illness since the pandemic began.

The R-value in Alberta dropped below over one over the last seven days, Dr. Deena Hinshaw, the province's chief medical officer of health, said Monday at a news conference.

The R-value is essentially the number of people infected by each infected person. It's known as the reproduction number, R-number, or simply as "R."

A value of one means with each person with the illness only infects one other person.

"After this weekend, we have now diagnosed more than 91,000 cases of COVID-19 in our province," Hinshaw said. "The positive signs that I mentioned on Friday have continued through the weekend but our situation is still serious. Our new case numbers are still extremely high and our health-care system remains under severe strain."

Headed into the holiday, she asked the public to continue to follow health restrictions with the goal of bringing down hospitalization and ICU numbers.

"We have lived with this virus for 10 months," she said. "We know how it spreads and we know it is critical that we all reduce the spread as quickly as possible.

"This week is another test for our province. This is usually a time for many to relax and celebrate, but we must not relax our guard or gather with friends and family outside our households. We know that celebrations can quickly turn to outbreaks if we fail to take the right precautions."

Active cases of the illness in Alberta have been slowly declining over the past week.

But during that time period hospitalizations have continued to climb.

The active case total peaked on Dec. 13, the day after a raft of new provincial restrictions went into effect.

That day there were 21,138 active cases across the province. The daily tally has since slowly but steadily declined.

Yet during that same week, the number of patients being treated in Alberta hospitals continued to increase.

The 1,240 new cases of COVID-19 announced on Monday is the lowest daily increase in new cases since Nov. 27, when the province reported 1,227.

On Monday, the Alberta government said that anyone who has been in the United Kingdom in the past 14 days should get tested for COVID-19, whether they're symptomatic or not.

The announcement came after Ottawa joined several European nations by halting flights from the U.K. on Sunday in an effort to prevent a new, potentially more contagious strain of the coronavirus from spreading to this country.

The province also said travellers from the UK who are participating in Alberta's border pilot rapid-test program must immediately quarantine, whether they've had a negative test or not.

The nine deaths reported by the province on Monday were:

The breakdown of active cases reported on Monday was:

Hinshaw was asked if people should report neighbours they see breaking public health restrictions over the holidays.

"It's disappointing to hear that people are planning to violate the public health orders and I think it unfortunately shows that not everyone understands the seriousness of COVID-19 and how quickly it can spread," she said.

People who suspect that neighbours are having friends and family over shouldn't jump "to the first conclusion, that people are violating the protocol," she said.

But it's valuable for people to remind each other that the rules are in place for everyone's protection and that they have to be taken seriously, she said.