Most Albertans will have to wait until next summer for vaccines, premier says

As Alberta rolls out COVID-19 vaccines in three phases next year, most members of the public will likely have to wait until summer for their shots, Premier Jason Kenney says.

As Alberta rolls out COVID-19 vaccines in three phases next year, most members of the public will likely have to wait until summer for their shots, Premier Jason Kenney says.

Paul Wynnyk, a deputy minister in the municipal affairs department, has been appointed to lead Alberta's vaccine task force, which will be a multi-disciplinary team drawn from across the public service, Kenney said at a news conference Wednesday.

Phase 1 of the vaccine rollout will happen in the first three months of 2021, he said, when it's anticipated that vaccines will been given to about 435,000 people, a little more than 10 per cent of the population.

Both the Moderna and Pfizer vaccines require two doses to be fully effective, with three to six weeks between doses, which means vaccinating 435,000 people would require 870,000 doses.

"Not all of this will arrive at once," Kenney said. "We've been assured by the federal government that shipments will begin to arrive by Jan. 4 and continue to arrive in waves throughout the early part of next year."

Phase 1 will focus entirely on the province most at-risk populations, he said, which includes residents of long-term care homes and designated supported-living facilities, staff who work in those facilities, on-reserve First Nations people, and other health-care workers.

Each dose 'represents an Albertan'

Wynnyk served as an officer in the Canadian Forces for more than 38 years, rising to command of the Canadian Army, before joining Alberta's public service.

"I look forward to the challenge ahead, and I want to be very clear that I do not look at these vaccines simply as objects to deliver or a work task to complete," he said at the news conference.

"Each and every dose of vaccine represents an Albertan who needs to be protected, and is vital to protecting not just their health but their livelihoods as well. My commitment to Albertans is that we will do everything within our control to ensure no Albertan has to wait any longer than absolutely necessary." 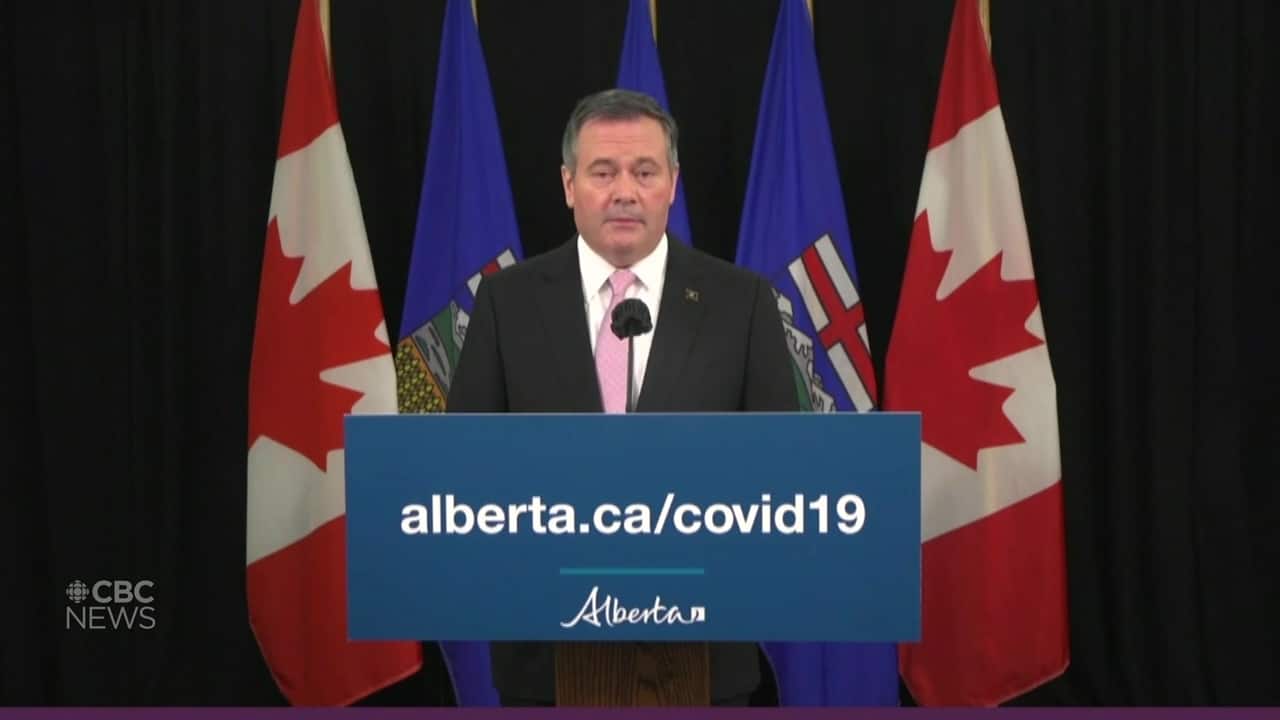 1 month agoVideo
0:55
Alberta Premier Jason Kenney has created a COVID-19 vaccine task force to prepare for the eventual vaccination of Albertans in 2021. Dr. Deena Hinshaw says until a vaccine arrives, we need to protect each other. 0:55

Phase 2 of the rollout will run from April to June, with the goal by the end of the period to have 30 per cent of the population immunized, Kenney said.

"By the summer, we plan to begin Phase 3, where vaccine will be offered to all Albertans. And that means it will be months before vaccine is available to the general population. This is the unfortunate reality that Canadians across the country face, and people around the world."

The risk of hospitalizations and COVID-19 deaths will decline significantly once the most vulnerable people are vaccinated, he said.

"I know people are getting tired and frustrated, but this is evidence that there is light at the end of the tunnel, and we can see this critical juncture, when we will get past the terrible damage that COVID-19 has caused for our society.

"So my message to Albertans today is this: We are ready for the vaccine, and we have a plan to get it out to you as quickly and safely as possible."

The total number of active cases in the province reached 17,144, an increase of 516 from the day before.

A total of 561 people have now died from the disease since the start of the pandemic.

On Wednesday, Alberta hospitals were treating 504 patients with the illness, including 97 in ICU beds.

The province has now surpassed 61,000 total cases, meaning about one in every 73 Albertans has so far contracted the disease.

"Around the world, there has been great progress on the development of COVID-19 vaccines," Kenney said. "We know that effective vaccines from Pfizer and Moderna will be ready for distribution here in Canada within weeks."

While the province cannot control when those vaccines arrive in Alberta, it will be ready to roll them out as quickly as possible, he said.

Vaccine will not be mandatory

Quick and effective distribution of the vaccine will be essential to the province's economic recovery, Kenney said, and will be a matter of life and death for many Albertans and their families.

"Before I continue, I want to be clear, Alberta's government will not make any mandatory vaccination," the premier said. "Some think that this is controversial but we don't live in a country where government can inject you with something against your will."

The government will soon amend the Public Health Act to remove the power of mandatory inoculation that has been on the books since 1910, Kenney said.

"But we need as many Albertans as possible to get vaccinated. And let me be clear about that — I will certainly choose to receive this vaccine when it's my turn, and I strongly urge others to do so."

Alberta is well-prepared to receive, distribute and administer vaccines as soon as they arrive, Kenney said.

Alberta Health Services has 13 vaccine depots throughout the province, all of which can receive and distribute the Moderna vaccine, which needs to be stored and transported at -20 C.

Another 17 facilities in the province are also able to handle vaccine storage, meaning there are a total of 30 depots across Alberta.

"The Pfizer vaccine, on the other hand, requires ultra-cold transportation and freezing, at 80 degrees below zero Celsius," Kenney said.

"Currently, three of our 13 vaccine depots can receive and store the Pfizer vaccine, and AHS is working to expand that capacity as we speak, ordering additional freezers and related equipment."

"We must continue to work together over the coming months to keep our numbers down, until enough Albertans have received their full series of vaccine to keep COVID under control," Hinshaw said.

"The actions each of us take right now are vital in slowing spread and bending the curve, as we are each others' vaccine until the vaccine arrives."

The regional breakdown of active cases on Wednesday was: