A Lamont County woman is infuriated after coming across a horrifying scene: 15 sheep dead on the side of the highway.

'It’s hard to get out of my head,' Lamont woman says of disturbing discovery 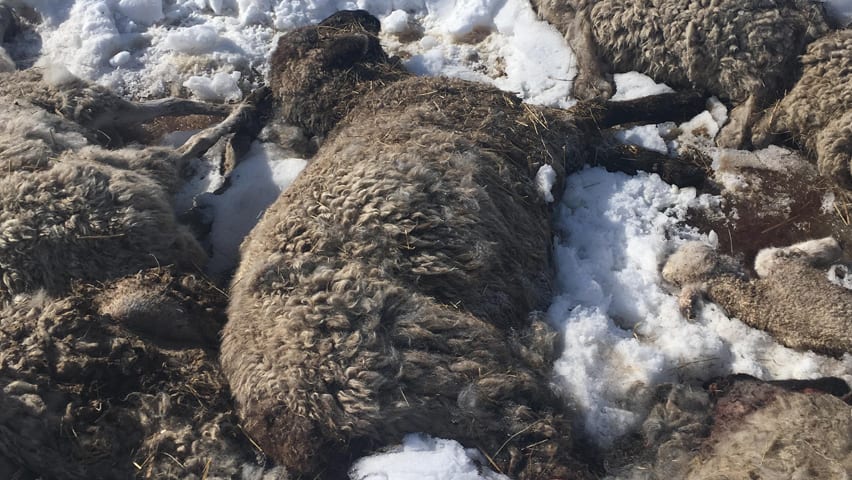 3 years agoVideo
0:50
Toni-Michelle Benteau was shocked to discover more than a dozen dead sheep dumped near her home by Fort Saskatchewan. 0:50

A Lamont County woman is infuriated after coming across a horrifying scene: 15 dead sheep on the side of the highway, including an unborn lamb with the amniotic sac still covering its face.

Toni-Michelle Benteau's husband, Scott Benteau, was driving on Highway 16 east of Elk Island National Park on Friday evening when he noticed that the scenery looked a little off.

"He got out and went over, and realized it wasn't part of the landscape," she said.

"He was mortified. He was dumbfounded," she added. "It was surreal."

Scott told Toni-Michelle, and she phoned RCMP. She said police assured her the animals would be properly removed and an investigation would be conducted.

When the Benteaus hit the highway Sunday, the bodies were still there and Toni-Michelle saw the carcasses for herself.

"It was very raw… It's just graphic, it's disturbing, and it's tragic," she said overcome with emotion. "It's hard to get out of my head."

She said it looked as if the sheep had been "gutted, had their throats slit, had their ears removed."

"To know that the human psyche is mentally and physically capable of such debauchery is numbing," she said. "Those sheep deserved better.

"Everyone I know is outraged," she said. "Somebody murdered and slaughtered these animals, and they discarded them. They just dumped them … with blatant disregard for [the] spread of disease."

Benteau called it a "senseless act" that could have been prevented. If someone had needed help caring for the animals, they could have reached out to the community, she added.

"There are a lot of people who would've done anything to avoid having this be the final outcome," she said.

Benteau posted a now-viral video of the scene to Facebook on Sunday, and contacted the RCMP again on Monday.

RCMP confirmed they are investigating a report of dead sheep either left on the side of the road or at the edge of a property.

"Our RCMP livestock investigator has been engaged and deployed to assist and support this investigation," Cpl. Laurel Scott said.

Living in rural Alberta, Benteau wants to see the addition of trail cams and an already tight-knit community grow closer.

"It just pushes the envelope that community needs to be tighter," she said.

"We should be a little more diligent when we see something that isn't part of the scenery."