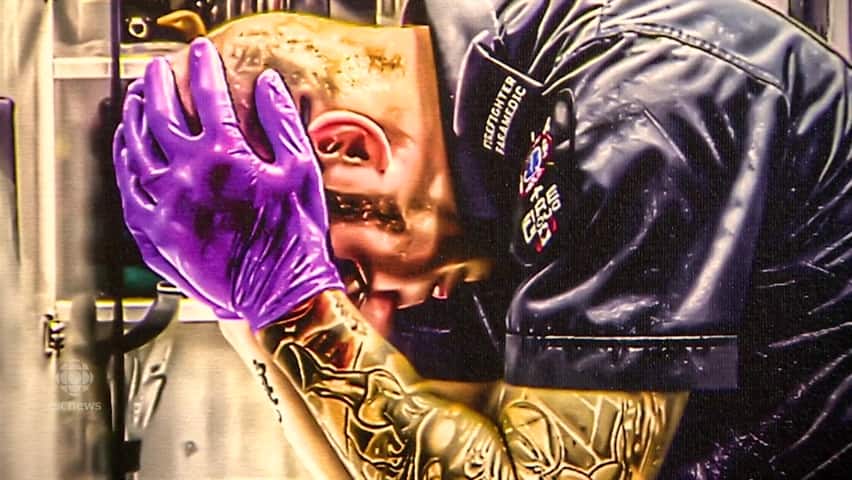 'This is my therapy'

The 21-year-old victim had severe injuries and was quickly loaded into the back of a Leduc County ambulance. Sundahl readied the IV bags and tried to patch up his patient's injuries. But the man did not make it.

Today, the paramedic uses photography to recreate some of the dramatic calls he's responded to in his 15 years as a paramedic and firefighter in order to cope with post-traumatic stress disorder (PTSD).

In one piece, the ghost of the young man watches while a paramedic hunches over the dead body in an ambulance, his gloved hands on his head.

Sundahl recreates and photographs scenes with family friends or neighbours wearing emergency services uniforms. With a tablet, he then renders them on his computer and draws details like demons and angels on top of the photographs.

"It was very cathartic for me to create this artwork based on the calls that … I can't forget," he said.

As soon as curator Mariam Qureshi saw Sundahl's artwork, she knew it had to be hung at Lotus Art Gallery on 124th Street.

"This might not look great on top of a very contemporary couch but it's super meaningful in the sense that it's going to help so many people," she told CBC News.

The photographs have been up for two weeks and have already garnered a big response from first responders and the public, she said. In one case, Sundahl received an email from a retired military veteran who was moved to tears during the exhibit.

Sundahl said he's hoping to bring his pieces to other galleries across Canada to raise awareness about first responders and PTSD.

"First responders are still human — we can have bad days," he said. "You can be affected mentally from work but you can still be a very effective police officer, paramedic."

'It's still killing a lot of us'

The Canadian Mental Health Association defines PTSD as a mental health disorder that affects the brain after a single event or prolonged events that often involve death, the threat of death or serious physical injury.

Symptoms of the disorder could include nightmares, flashbacks, anxiety, a lack of concentration, increased aggression and suicidal thoughts.

A report presented to the House of Commons in October 2016 states that 10 to 35 per cent of Canadian first responders will develop PTSD.

This year alone, 32 first responders have lost their lives to suicide, according to the organization.

Daniel Sundahl was almost one of them.

His nightmares and anxiety quickly turned into severe depression.

"I never thought that it was something wrong because it changes the chemistry in your brain," he said. "You lose the capacity to recognize 'Hey, it's not normal to be thinking about killing myself.' "

Admitting he had a disorder was difficult, Sundahl said, because there is still a stigma among first responders around mental health disorders.

"A lot of people that do this work, they'll often say … You shouldn't be surprised at the things you see. If you don't like it, get out," he said.

"Mental health awareness has come a long way in the last four years but there's still a long ways to go. It's still killing a lot of us."

Sundahl's exhibit will be showcased at the Lotus Art Gallery until the end of September.