Some vehicles were stranded in water that was knee deep on High Level's main street yesterday after a storm the mayor described as being like "a hurricane." The downpour also led to damage at the town office and a number of flooded basements. 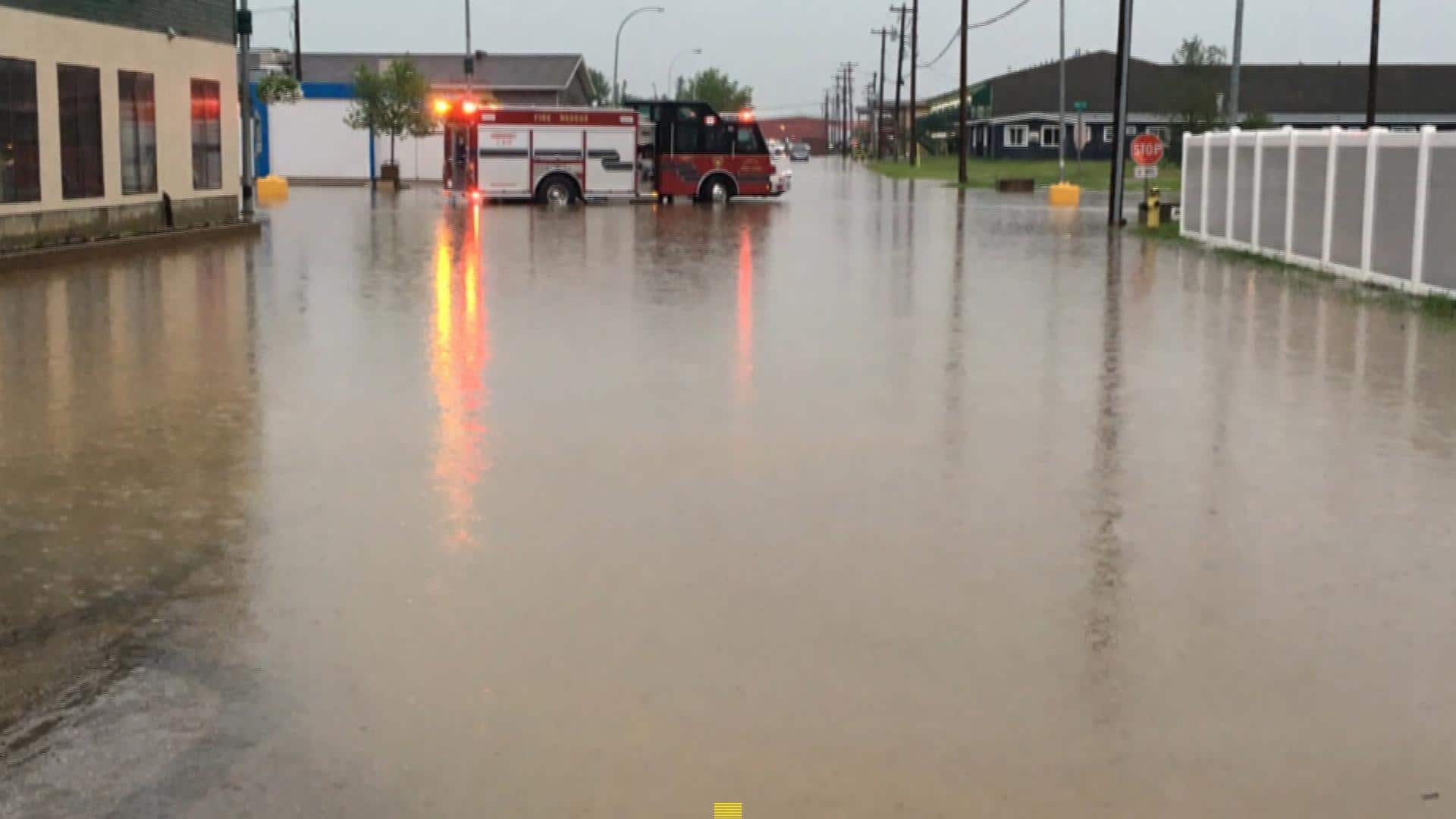 5 years ago
0:57
High Level and Dene Tha' First Nation are dealing with the aftermath of Wednesday's downpour. Many streets and building have been flooded. 0:57

A torrential downpour in High Level Wednesday caused damage to the town office and flooded a number of basements.

At one point, the town's main street looked more like a river, knee deep in water with a number of stranded vehicles.

Mayor Crystal McAteer said there was also hail. She's never seen anything like it during her 38 years in the town, located about 740 km northwest of Edmonton.

"It was almost like a hurricane, trees were bent over and it was hailing and raining," said McAteer, who described the storm as "crazy."

The local fire department helped move people from their vehicles to safety. Police were on the scene blocking the main street.

"It kind of caught us off guard because we've never had a phenomenon like this before," McAteer explained.

Environment Canada recorded 28.7 mm of rain at its monitoring site at the High Level Airport Wednesday, explaining that amount in a short period of time is considerable.

A restoration company was helping mop up water in the town office Thursday. The deluge led to water seeping into washrooms and flooded the nearby library, although it appears none of the books got wet.

Damage is being assessed throughout the community.

McAteer said a number of sewer backups were reported, although it's not clear how many homes are affected. Many residents are pumping water out of flooded basements and ripping out damaged carpets.

McAteer said while more rain is in the forecast, it looks like the worst is behind the community. She said flooding is much worse at the nearby Dene Tha' First Nation, about 115 km northwest of High Level.

Dene Tha' Chief Joe Pastion said a local state of emergency remains in effect at the First Nation community, where about 13 homes remain under threat from rising water levels after several days of heavy rain.

Water still seems to be rising a bit in the local rivers and that is pushing water back into Sousa Creek, said Pastion.

Band members are helping people who live in the threatened homes to put sandbags around them to try to protect them.

In total, Pastion said 144 people have been forced to leave their homes because of the flooding. About 120 of them are staying in a reception centre that has been set up at a local school.

Standing water remains an issue in the community, rendering some areas inaccessible.

"The roads are washed out so there's not a lot of access," said Pastion.

Pastion said damage is still being evaluated throughout his community. But he will likely be requesting provincial and federal government help with some rebuilding costs.