Hundreds of guests worldwide tuned in for the traditional Hindu ceremony 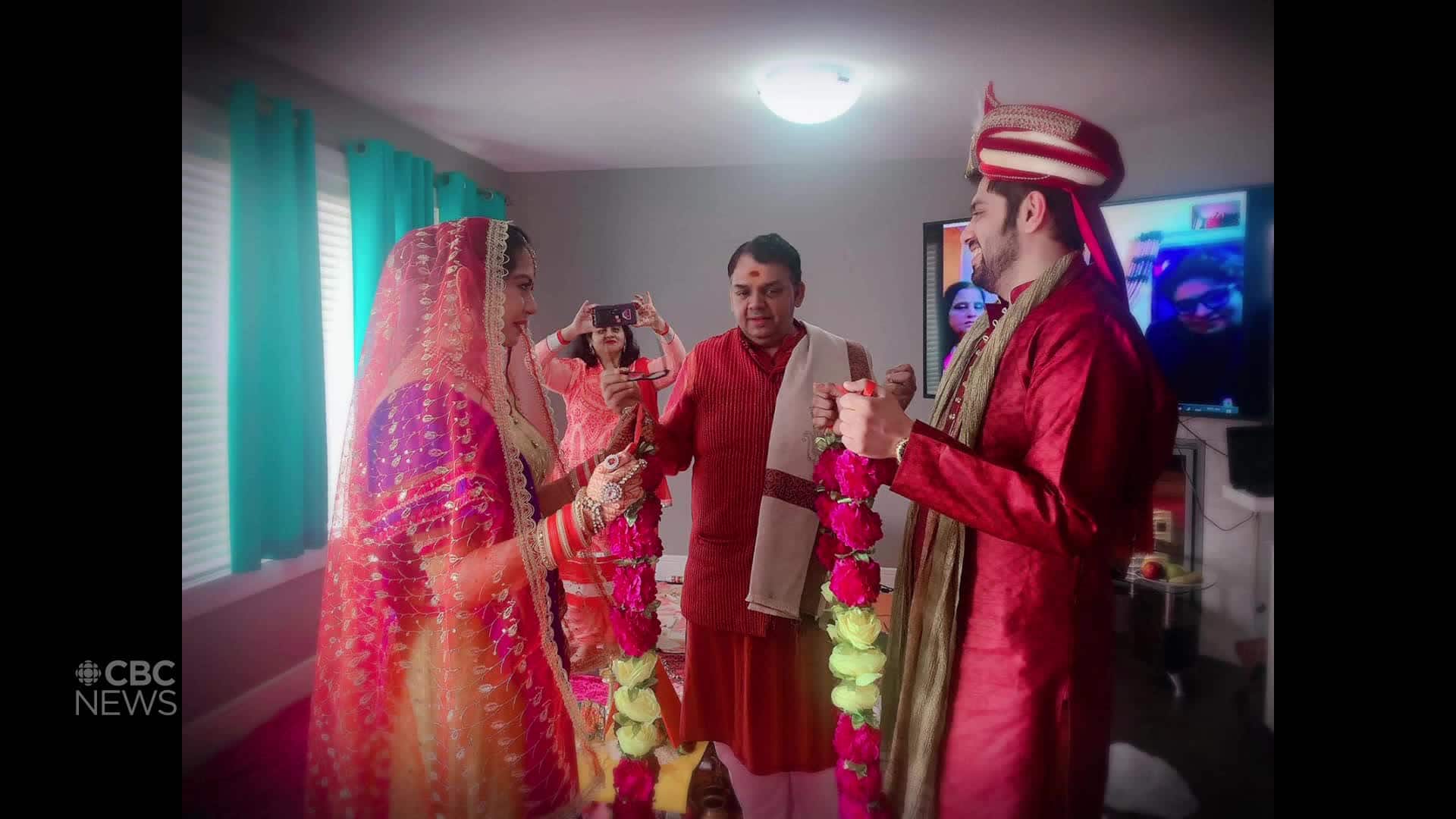 'There is nothing that you cannot do'

6 months ago
3:03
Megha Sharma and Gaurav Sapra's virtual wedding followed Hindu rituals and measures to stay safe during the pandemic. 3:03

Megha Sharma and Gaurav Sapra planned to wed in New Delhi — a 5-day celebration of their love with hundreds of family and friends.

The Edmonton couple had to cancel reservations for a grand banquet hall and accommodations, as well as airline tickets for Sharma's family.

But within days, they revamped their plans to create something new — an online traditional Hindu wedding that followed public health measures.

On April 17, nearly 500 guests tuned in via Zoom from India, Nigeria, Dubai, Australia, the U.S. and Canada. Dressed in suits and saris, they danced and feasted for hours.

"They were hooting for us when we were exchanging the garlands and doing the rituals and they were clapping and singing and dancing, playing music and teasing us," said Sharma, laughing as she recalled the festivities.

"We really felt that they were together with us in the room. It was so amazing."

From their new home in southwest Edmonton, still decorated with colourful banners, the beaming couple shared their story on Wednesday by video call with CBC News.

They recalled the heartache after the pandemic wiped out months of wedding plans.

Friends had organized music and dancing to welcome the couple at the New Delhi airport; there was shopping to be done and bachelor and bachelorette parties to attend; Sharma would meet Sapra's parents for the first time.

They held out hope until the last minute before cancelling their month-long trip to India.

"We were all crying," Sharma said. "Our hopes were shattered, completely shattered."

They would do it online instead.

Within three days, they found a local priest ready to perform a ceremony mindful of public health orders.

They tracked down garlands, turmeric and as many other ceremonial items as they could find. Traditional Hindu rituals were performed in unique ways.

Rather than having a professional henna tattoo artist paint Sharma's hands and feet at a party during the Mehendi ceremony, intricate designs were applied by her sister at home. Swati Sharma also took on the role of photographer, chef and determined wedding planner.

"During this pandemic if you want to conduct something as big as a marriage, it is possible, if you are taking all of your social distancing precautions," Swati said. "There is nothing that you cannot do."

The ceremony took place at Swati's home where three laptops allowed guests to tune in as the couple exchanged vows and circled the sacred fire.

On a big screen TV in the living room, the groom's parents and brother in India could be seen dancing and participating in the ceremony.

"Almost 500 people saw it live," said Gaurav, explaining that by that point many guests would have typically gone home. "Because this was the only thing happening, people were on the call for almost three hours."

The wedding finally wrapped up with the Griha Pravesh ceremony that welcomes the bride into her new home. On WhatsApp from India, Sapra's mom guided them through the ritual for prosperity and good luck.

Both graduates of MacEwan University and originally from New Delhi, it's been four years since the couple met on Facebook.

Sapra inquired about a textbook Sharma wanted to sell. A year later they bumped into each other and quickly fell in love.

Now settling into their new home, Sharma praised her husband's homemaking skills. Traditionally, the in-laws would do all the cooking until the bride's henna fades.

But with his parents in India, and only minimal cooking skills, Sapra used his time in self-isolation to perfect delicacies such as shahi paneer and dal makhani for his vegetarian wife.

"He is taking such good care of me and he is not letting me work," Sharma said, provoking laughter from Sapra. "He's doing everything by himself so that I don't feel I'm not getting the treatment I would have gotten, had I been in India with his family."

In the future, the newlyweds hope to travel to India for an in-person traditional wedding celebration.

But for those debating whether to go ahead with upcoming nuptials, they say go for it.

"Who knows what's going to happen in the next few months," Gaurav said. "Whatever's happening in the world, at least in your world you have created a happy moment for yourself. It's just going to make your life much more beautiful."