Homegrown is a series that looks at how Alberta's local movement is changing buying habits, connecting people, and shaping communities. Share your story ideas with the Homegrown team by writing to  josee.st-onge@cbc.ca

It's Tuesday — delivery day — and Sparrow's produce is destined for members of his community-supported agriculture (CSA) program in Edmonton.

The 28 CSA members who support his farm, Sparrow's Nest Organics, have already paid for their share of this year's harvest.

"The money comes in early in the spring," said Sparrow. "That's when, typically, farmers have no money."

The early cash injection allows him to cover the costs of production, like purchasing seeds, fuel, and paying workers.

"It covers all those costs until we're really rolling with vegetable production, which often isn't until June or July."

Sparrow has been growing food on his 70-acre farm, 60 kilometres north of Edmonton, since 2000, and has been certified organic for 15 years.

Being organic involves a lot of work, but Sparrow said he's never considered another way of farming.

"It's a real struggle, but if the commitment is there to look after the Earth, you don't really question it, you just do it."

Sparrow's dedication to growing healthy produce is one of the reasons Elisabeth Scholtz has supported his CSA program for about three years.

"The quality of the food is absolutely excellent," said Scholtz. "It's better than something we could grow at home."

Sparrow's program is the longest-running CSA in the Edmonton area. More farmers have embraced the model in the last decade.

About 15 farms currently offer CSA programs in Alberta, compared to only three in 2008, according to Alberta Agriculture.

The province has been tracking local food demand in Alberta by conducting surveys every four years since 2004. 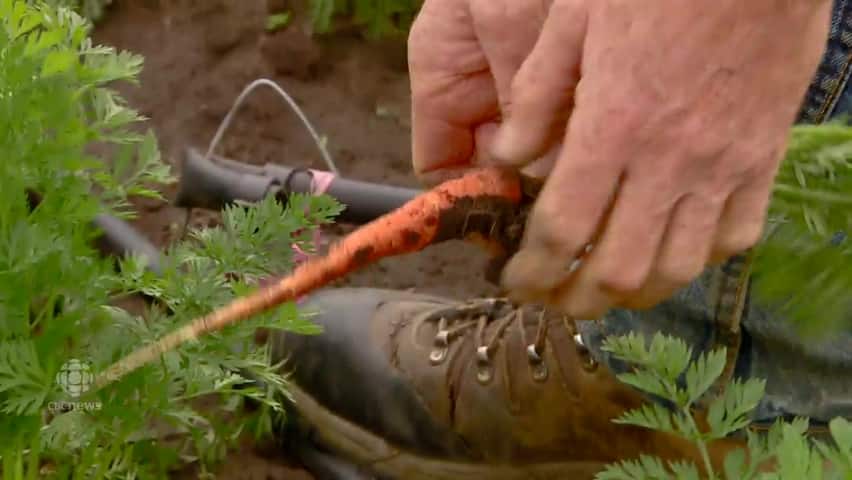 'Everything is grown in the soil here'

3 years ago
1:54
Organic farmer Graham Sparrow uses a community supported agriculture model to help his farm reach the people that share his vision. 1:54

The number of Albertans who know about community-supported agriculture programs grew only marginally between 2012 and 2016.

"Those who know about it know a fair bit," Kotowich said. "But if you haven't heard of the term and don't know how to find these farms, then there's no knowledge at all."

'Beyond a good deal'

Scholtz, who was already aware of the CSA model, joined Sparrow's program when she couldn't grow her own garden anymore.

She pays $850 for weekly produce deliveries from early June to mid-October.

"It's beyond a good deal," said Scholtz, who easily feeds her family of three with her share of Sparrow's harvest.

The food is distributed depending on its growing season, and the weekly haul is always different.

"Sometimes you get loaded with a whole bunch of greens, and that's just what you cook for that week," said Scholtz. "That's how nature works, and that's how it's at its healthiest."

"It's easy, it's inexpensive. I think what's going to happen is that it's really the wave of the future."

Most vegetables go to farmers' market

While the CSA program is crucial for bankrolling the farm operations, Sparrow only dedicates about one-fifth of his harvest to it.

He sells most of his fruits and vegetables at the Old Strathcona Farmers' Market in Edmonton, where the produce will fetch a higher price.

Both avenues allow Sparrow to have direct contact with the people who buy his products, something he relishes.

There's no greater compliment for the farmer than being told that his fruits and vegetables remind people of their grandmother's garden.

"My heart just swells," said Sparrow. "I get tingles all over when people come and talk to me about my food being the best food they've tasted since being a child."

Josee St-Onge is a journalist with CBC Edmonton. She has also reported in French for Radio-Canada in Alberta and Saskatchewan.