City council wants the province to limit legal agreements that prohibit competitors from opening stores in a neighbourhood after a grocery chain has closed one of its outlets. 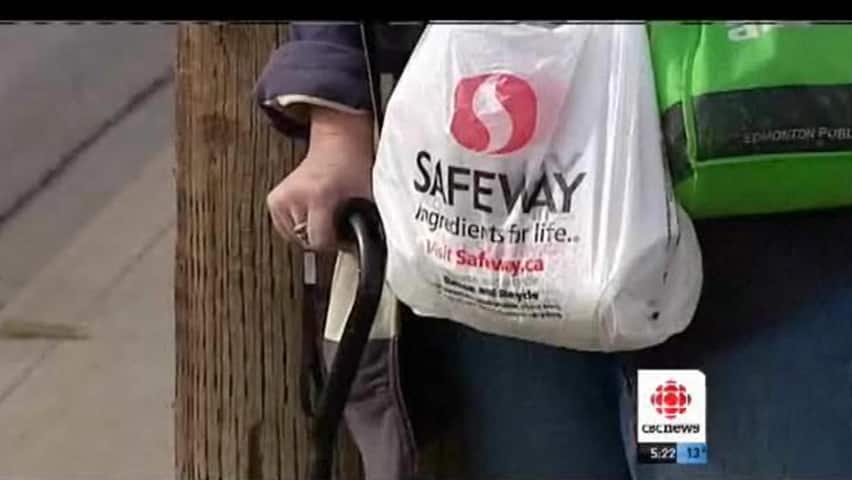 9 years agoVideo
2:15
The city is seeking changes to legal agreements that limit the number of grocery stores in mature neighbourhoods. 2:15

City council plans to ask the province to place limits on legal agreements that prohibit competitors from opening stores in a neighbourhood after a grocery chain has closed one of its outlets.

Critics say these restrictive covenants have created so-called "food deserts" in the city — mature neighbourhoods where there are no grocery stores within walking distance.

Residents without vehicles must either rely on rides from friends and family or take long transit rides to the nearest grocery store. Some of these agreements continue in perpetuity.

The former Highlands Safeway store located at 66th Street and 118th Avenue is covered by a restrictive covenant. The store has sat vacant since it closed, but other grocery businesses are prohibited from setting up shop.

"It makes it real difficult for seniors and for people like me who walk with a cane," Highlands resident Michelle Michaud said. "It would be a lot handier if there was a store right there, like there used to be."

Councillors discussed the issue at Wednesday's executive committee meeting. They are concerned that food deserts restrict development in mature neighbourhoods and hurt the health of residents.

"It's like the gas stations that sit vacant because they're not properly maintained," Mayor Stephen Mandel said. "You leave blank spaces in older neighbourhoods which is not good."

Councillors have asked the city lawyers to provide a legal opinion on what they can ask the province to do.  Mandel believes it is unlikely existing covenants can be eliminated. Instead, he wants to make sure future agreements aren't as restrictive.

Issue raised with province in 2007

This isn't the first time council has tried to change the scope of restrictive covenants.

Following a council motion in 2007, Mandel wrote the province asking that a 10-year limit be placed on covenants. The Highlands Safeway site was cited as an example.

Lloyd Snelgrove, then the minister of Service Alberta, cited the status quo in his response to Mandel: the Highlands covenant doesn't restrict all commercial activity, just large food and drug stores, and the agreement would expire if Safeway closed all its nearby outlets.

Snelgrove also told Mandel that the city could ask the courts to end or change the scope of a restrictive covenant if it conflicted with a land use by-law or was deemed to be in the public interest to do so.