Charles Al-Homeira wanted to create a little holiday happiness so turned his yard into a winter wonderland of Christmas lights. 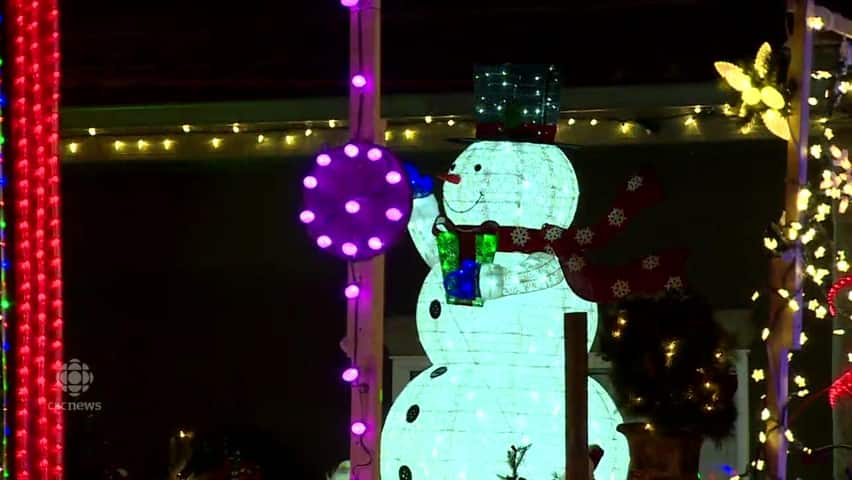 4 years ago
1:18
Charles Al-Homeira creates a little Christmas magic with a massive light display in his southwest Edmonton yard 1:18

Charles Al-Homeira wanted to create a little holiday happiness so turned his yard into a winter wonderland of Christmas lights.

"Everything was very easy because I've been doing this for a very long time," Al-Homeira said Tuesday at his southwest Edmonton home.

He started decorating his property at 1013 Hollands Point in 1991, when his house was one of the first in the area.

Every year, he adds to his collection of displays with the number of lights growing last year to about 24,000.

He has almost doubled that number this year with 46,600 lights.

"I thought to increase it because in my neighbourhood lots of people like it, especially the kids", said Al-Homeira. "People drive by to see the lights."

It has become a hobby for Al-Homeira, who retired in 2008 after he sold the business he'd operated for 26 years.

The eclectic display includes Christmas trees, stars, reindeer, snowmen, a giant cross, a nativity scene, even a pink flamingo, all lit up in colourful lights.

Al-Homeira started working on this year's production at the end of October, putting in two to three hours in the morning and again in the afternoon. It took him two weeks.

He does all of the work himself, using a six-metre stick with a hook to lift the strings of lights to where he wants them.

So why does he do it?

"Happiness. Just to make everything for the kids especially, to make them happy."
CBC's Journalistic Standards and Practices|About CBC News
now