Baseball program for kids with disabilities a home run in Alberta

Braeden Palmer uses a walker or a wheelchair to get around, but the three-year-old is quick to ditch the devices when he gets on the baseball field.

'Every year that we can have baseball for him is one more happier year for him," says father

Braeden Palmer uses a walker or a wheelchair to get around. But the three-year-old is quick to ditch the devices when he gets on the baseball field.

"You got to squat to catch," said the little boy on Monday night, pushing his oversized baseball glove into the grass to prop himself into position.

Braeden, a superfan of the Toronto Blue Jays, is able to play his favourite sport this year thanks to the Challenger Baseball Program at the Legion Memorial Ball Park in St. Albert. 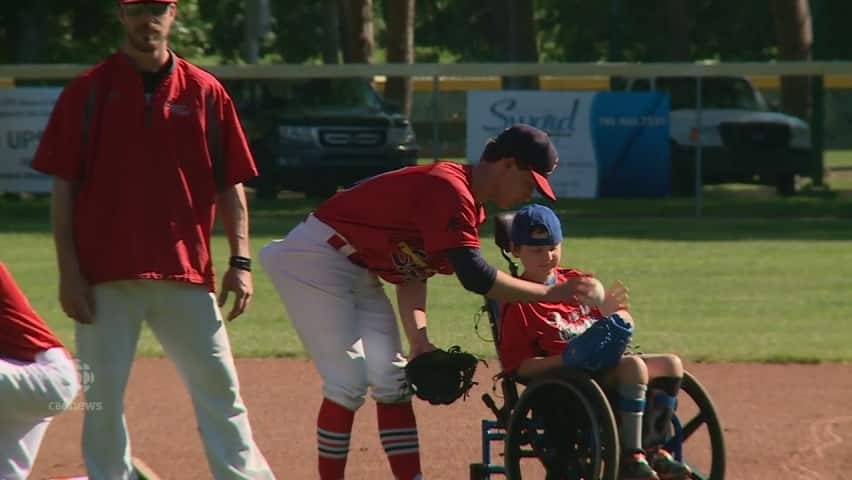 3 years agoVideo
1:00
The Challenger baseball program in St. Albert helps children with disabilities get an opportunity to play 1:00

His father, Andrew Palmer, said his son is happy watching his favourite team play on television. For a while, he thought that may be the only avenue for his little boy, who has a condition that affects blood-flow through his heart, as well as scoliosis and arthritis, to enjoy the sport.

There are 25 children from the area, including Braeden, who come out weekly to play a version of the game modified to suit their individual special needs. They're then paired up with older SAMBA players (a different team comes out each week) to help with the game where needed.

SAMBA president Kurtus Millar helped organize the program, describing it as one of the most rewarding he facilitates.

He said a highlight has been watching the children who use walkers progress from hitting the ball off the tee.

"We actually pitch to them," Millar explained. "To watch them get off their walker and get in hitting stance and actually hit a baseball and do a great job and get back on the walker and run the bases, it's amazing."

Spruce Grove launched the same program last year. Millar is hoping other nearby communities pick up on it as well.

"If we could get the league bigger, we could do jamborees and stuff like that," he said.

'He loves baseball so much'

Declan Fawcett, 14, used to play on a minor league team, but he prefers the Challenger program.

Fawcett has a rare genetic syndrome that caused developmental delays. His mother, Erica Gislason, said her son had a hard time keeping up with the pace of a minor league game.

"He did well at the beginning when all the kids were younger but they progressed. The kids with the development delays or cognitive disabilities just don't progress as fast," Gislason said. "It becomes a little bit of a safety issue."

Fawcett, proud to have scored two home runs during last week's game, said working with a buddy is one of the best parts of the Challenger program.

"We play pass and they cheer us on and run with us and do lots of different stuff," Fawcett said.

The experience is also valuable for the buddies.

'AAA' midget player Liam Froment, 15, was helping Braeden on Monday. He was blown away by the little boy's knowledge of the Blue Jays.

"My guy, Braeden, he loves baseball so much. I don't think he'd rather do anything else," Froment said. "He's passionate. I got to probably take that to my game. That's how you've got to play."

Braeden's favourite player is Blue Jays catcher Russell Martin, but he's familiar with the entire roster, and even announcer Buck Martinez's famous "Get up ball, gone!"

"There are no words to describe how much fun he has, how much fun it is to watch him play," Palmer said of his son.

"We never know what his life is going to bring him with all of his medical complications. So every year that we can have baseball for him is one more happier year for him."