'We consider ourselves at this point to be lucky': Central Alberta school damaged by roof fire

Parents in Sedgewick, Alta., are waiting to hear about the status of the town's only school after its roof caught fire on Wednesday night.

Sedgewick, Alta., is a town with about 800 residents, roughly 180 kilometres southeast of Edmonton.

Neighbours living near Central High Sedgewick Public School said they saw clouds of black smoke come from the building at around 8 p.m.

Some 30 volunteer firefighters from Sedgewick, as well as Killam and Hardisty, were on scene to help put out the fire. 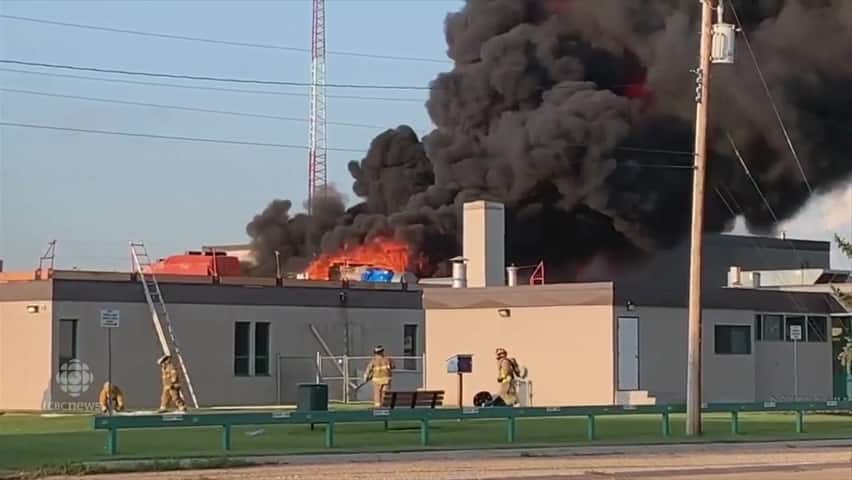 "It was good how quick they came," said Jen Weeks, who lives a block away from the school and saw the smoke from her window. Weeks has two children attending the school.

"These people, their kids go to the school, so they're not going to sit around and wait for it to burn to the ground," Weeks said.

It took about an hour for the fire to be put out.

Diane Hutchinson, the director of communications for Battle River School Division, said there was work being done on the roof before the fire started.

"At this point, we're still in the process of determining if those two things are connected," she said.

Hutchinson says fire investigators and insurance adjusters were on scene Thursday to investigate the cause and the damage of the fire.

After the investigation concludes, the school division will then determine a course of action for classes in September, Hutchinson said.

The school has grades 1-12, with 430 students from the communities of Sedgewick, Hardisty, Killam and Lougheed.

The wing of the building that is most damaged from the fire houses elementary school students.

"We will be able to at least have some sections of the building open," Hutchinson said.

"Until we know for sure what the status of the elementary classrooms will be, we can't say what the plan is for elementary students, but other students will be accommodated here," she said.

Hutchinson said no one was in the building at the time the fire took place.

"No one ever wants a fire, but when that circumstance did arrive, we consider ourselves at this point to be lucky. We will do our best to have the school accessible as [soon] as possible and we will keep them [the parents] posted," she said.