Three communities south of Fort McMurray, one which was hosting an evacuation centre, were ordered to leave late Wednesday as changing weather patterns turned the wildfire their way. 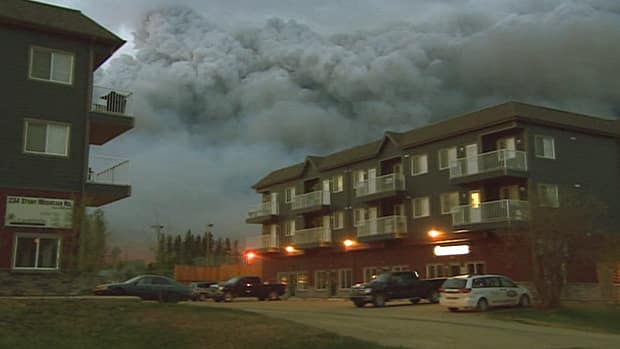 Many evacuees forced from their Fort McMurray homes by wildfire Tuesday are on the move once again.

Three communities south of Fort McMurray, one including an evacuation centre, were ordered to leave as changing weather patterns turned the wildfire their way late Wednesday evening. 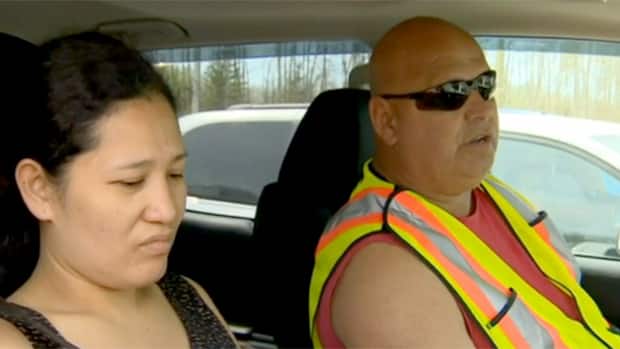 Evacuees worry about their homes

A red glow from the encroaching fire can be seen ominously framing the Anzac evacuation centre as people board buses. For Donna Guillamot, evacuated yesterday from Fort McMurray, the feeling is all too familiar.

"I thought it was safe here, so I guess we'll go to Edmonton," said Guillamot. "It's very stressful, you don't know what's burned, what's not burned, when you can go back."

"Now you're sitting here and all you see is red flames. It's pretty scary."

Buses took people to Edmonton and officials hope to have everyone out by midnight. Dale Bendfeld, the acting director of community services and policing for Wood Buffalo, says safety, as always, is paramount.

"As you can see looking up there this is a very large and very serious fire we're working with," said Benfeld.

"It's already taken on a city, we're going to ensure that people of Anzac and Gregoire are safe and get them down to Edmonton and out of here."

The regional emergency operations centre (REOC) which had just relocated to Anzac from the Fort McMurray airport will be moving south to Lac La Biche.

Anzac has a population of 714, Gregoire Lake Estates 79 and Fort McMurray First Nation about 700 — the populations are likely much higher due to the number of Fort McMurray evacuees staying in the communities.

As the sun set behind clouds of thick smoke earlier on Wednesday evening, Fort McMurray was effectively cut off from the rest of Alberta as a massive wildfire burned on both sides of the critical highway that links the oilsands city with the rest of province.

By day's end, the raging fire had destroyed more than 1,600 homes and buildings and forced even the emergency response team to move its headquarters to a new location, 30 kilometres to the south.

About 250 firefighters, aided by 12 helicopters and 17 air tankers, fought flames on several fronts in and around the city.

Smoke moves in on the Fort McMurray International Airport. Here's a look from 8:41 a.m. to 6:41 p.m. MT Wednesday. (Images from NAV Canada's webcam)

One battle took place near the northwest neighbourhood of Timberlea. Two others were fought on the south side, near the airport and Saline Creek.

"Currently that fire, at Airport Road and Highway 63  ... has jumped both sides of the road, and traffic is no longer moving north or south," Dale Bendfeld, acting director of community and protective services, said in an update Wednesday evening.

With 80,000 people evacuated and the fire still out of control, Alberta declared a province-wide state of emergency, a move that puts the battle to save the city, and subsequent recovery efforts, in the hands of the provincial government.

As the day passed, the fire, pushed by gusting winds, moved steadily east.

At one point early in the evening, the Regional Municipality of Wood Buffalo reported that the CanWest Propane building, down the road from the airport, was on fire. Less than an hour later, just after 7 p.m., another update said the building had been saved thanks to "heroic efforts from fire crews."

The emergency response centre was evacuated at midday from a fire station in that area to the community of Anzac, south of the city.

The region reported some good news, saying on Twitter that "firefighting efforts to save the water treatment plant have been successful!"

Tens of thousands have fled the city

In all, about 10,000 people who fled the fire were being sheltered at oil company work camps north of the city. Some of those camps have run short of food, but provincial officials said a C-130J Hercules aircraft will be loaded with food and water and flown to those camps, some of which have their own runways, either Wednesday evening or on Thursday.

Another 70,000 residents, the province said, headed south out of Fort McMurray before the highway was closed, where many ended up in evacuation centres in Anzac, Lac La Biche or in Edmonton, 430 kilometres away.

Some drivers headed south ran out of gas and were stranded. On Wednesday, a fuel tanker truck was dispatched along the highway to fill empty gas tanks.

For fire Chief Darby Allen, it was another trying and emotional day.

"We successfully evacuated 88,000 people," he said during a morning news conference. "No one is hurt and no one has passed away.

Then, his voice breaking with emotion, he said: "I really hope that we can get to the end of this day and we can still say that."

Allen described the wildfire as if it were a living thing, and warned that parts of the city remain in grave danger.

Speaking of neighbourhoods that had so far escaped the flames, he said: "This fire will look for them and it will find them, and it will try to take them. And our challenge today is to try to prevent that."

By day's end it was unclear how successful those efforts had been.