The Alberta government plans to reduce operating expenses over the next three years to the tune of $1.2 billion, or 2.5 per cent, while increasing some user fees, according to the provincial budget released Thursday.

The Alberta government plans to reduce operating expenses over the next three years to the tune of $1.2 billion, or 2.5 per cent, while increasing some user fees, according to the provincial budget released Thursday.

While he acknowledges the economy remains volatile and revenues remain flat, Toews sees better times ahead.

"I am optimistic," Toews told reporters at a news conference prior to his budget speech.

"I believe that 2020 has the potential to be a turnaround year for the economy in this province.

"We're seeing signs at this point that our broad-based method of improving the Alberta economy is beginning to attract investment."

Rachel Notley, leader of the NDP Official Opposition, said the government was relying on overly optimistic numbers, including the assumption of $58 US for the price of a barrel of West Texas Intermediate oil, the benchmark used in Alberta budgets.

"So what that means is most of the revenue forecast in this budget are magical thinking," she said. 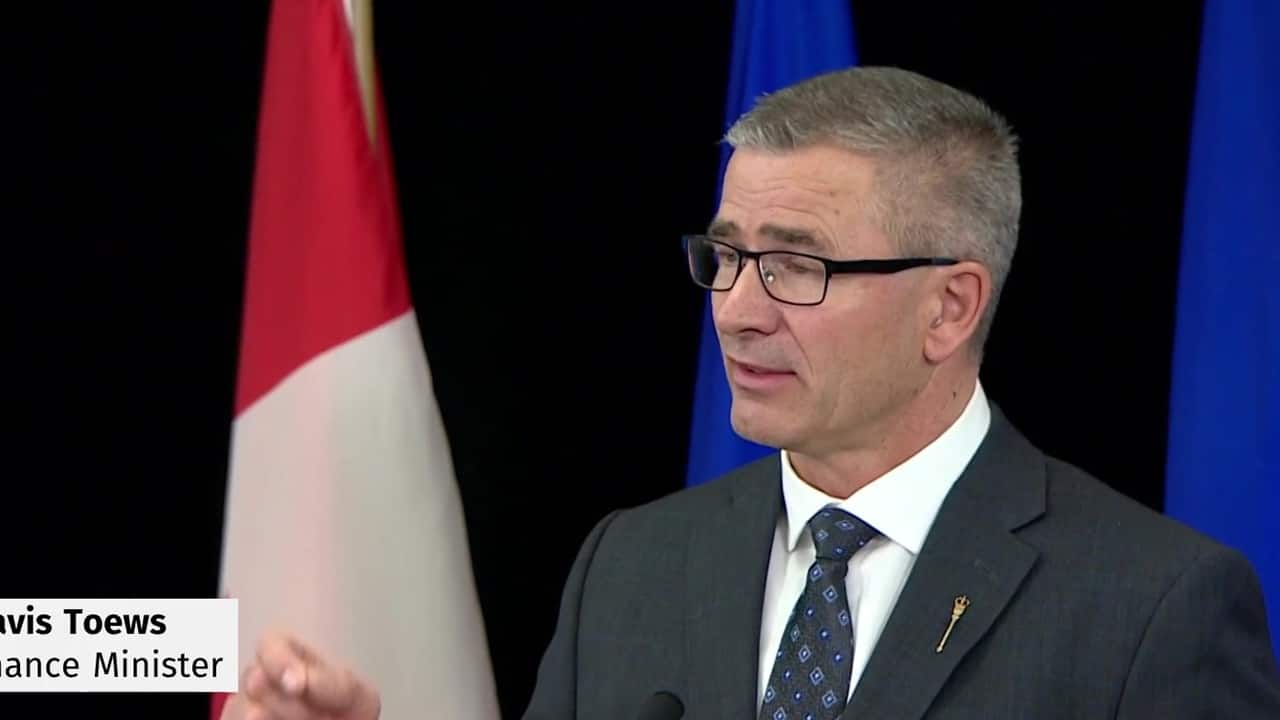 With Budget 2020, the Alberta government promises a return to a balanced budget by the end of its mandate in 2023.

Short-term rentals like Airbnb will have to start collecting the same four per cent tourism levy imposed on hotels.

The province wants to introduce income testing for the seniors' drug program, which would mean beneficiaries with higher incomes would have to pay deductibles.

The fiscal plan assumes a price of $58 US for the price of a barrel of West Texas Intermediate oil, the benchmark used in Alberta budgets.

The budget also contains a chapter on job creation called The Blueprint for Jobs.

The plan relies heavily on the government's move toward creating what it believes is a better climate for business.

New projects totalling $772 million are expected to create 3,000 jobs. The government also intends to roll out programs to attract and keep talented newcomers in Alberta. One plan will offer a path to permanent residency for graduates of top U.S. universities if they commit to launching a start-up in Alberta.

The government promises to bring forward programs to help train more qualified transport truck drivers, and to work with post-secondary institutions to train more pilots and aviation maintenance staff. The fiscal plan says there are shortages in those areas.

Notley said there was nothing she saw in the blueprint that would result in the creation of jobs.

"The blueprint is more like a certificate for demolition," she said. "It has no practical solutions, no practical plans to create jobs."

Another chapter focuses on getting a "fair deal" for Alberta within the Canadian federation. Alberta has asked Ottawa to provide another $2.4 billion from the fiscal stabilization fund to cover the impact of the collapse in global oil prices on the Alberta treasury.

Premier Jason Kenney has argued the cap of $60 per resident is outdated and unfair, and says the province deserves more money.

Alberta remains the only Canadian province without a provincial sales tax.

The fiscal plan says 684 government of Alberta positions will be cut, with 277 in Agriculture and Forestry. The government says most will be reduced through attrition.

The fiscal plan indicates it intends to save $610 million in public sector compensation in 2020-21 through staff reductions and "simplifying delivery methods."

An arbitration decision to award a one per cent raise to general government employees and health care support workers will cost the government $35 million.

Another 752 positions are set to be lost in post-secondary institutions, school districts and agencies, boards and commissions. That figure includes 138 teachers and 106 support positions.

At $20.8 billion, the health care budget is only slightly higher than last year.

The government intends to introduce a plan to perform 80,000 additional surgeries by the end of 2023. The goal is to have 30 per cent of those procedures performed in private facilities, double the current percentage.

Other savings are coming from a new plan for physician compensation which was imposed on doctors earlier this month after a breakdown in talks with the Alberta Medical Association.

The government is introducing no new funding for education, sticking with a total budget of $8.223 billion. That includes $7.2 billion in money from the government and $681 million from reserves and "own-source funding."

Schools will be expected to dip into their reserves, increase fundraising and make money through measures like renting their facilities.

Last week, the province released a new formula for schools, which provides funding based on a three-year weighted average of students, and funds administration through a separate grant.

Until recently, smaller rural municipalities weren't charged for policing. That changed last fall. The change will generate $22 million in 2020-21 which will increase to $44.9 million in 2022-23.