A memorial was held Tuesday for four players with the Humboldt Broncos junior hockey team who called the Edmonton area home. 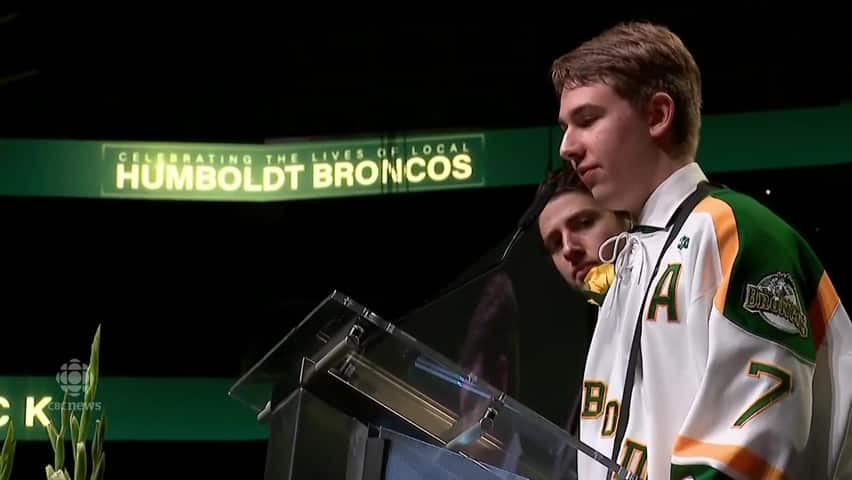 Jaxon Joseph had recently told his girlfriend for the first time that he loved her.

Logan Hunter was known to his two older sisters as "Logi Bear" and loved his dog, Charlie.

Parker Tobin wanted to pursue a career in business and finance, a field that friends and family thought would be perfect for him.

Stephen Wack was inseparable from his younger brother.

Friends and family of the four young Humboldt Broncos hockey players shared memories of the young men at a memorial Tuesday at Rogers Place.

At the front of the stage were urns surrounded by green and yellow flowers, hockey skates and large photos of each player. Thousands of people dressed in jerseys and green and yellow pins filled every chair in front.

Joseph, from Edmonton, Tobin, from Stony Plain, and Hunter and Wack, both from St. Albert,  were among 16 people who died after a semi-trailer and the Saskatchewan team's bus collided on April 6.

Thirteen others were injured in the crash with several remaining in hospital.

The young men were different in many ways. But each of their friends and families who spoke onstage made clear it was their love of the game, love for their families and love for each other they had in common.

Joseph was loving his new life in Saskatchewan, Radmanovitch said during the memorial. He embraced the "country boy" lifestyle and went deer hunting with his friends.

He'd take on the role of "bush boy," wearing an orange vest and walking through the woods to push the deer out toward his friends.

For Christmas, he asked for tickets to a music festival in Craven, Sask. He could have gone to Big Valley Jamboree near Edmonton, Radmanovitch explained, but he wanted to do this trip with the boys.

Two days before the crash, Joseph told his girlfriend, Quinn, he loved her.

Joseph's father, Chris Joseph, a former NHL defenceman, said his son introduced her to the family not long ago. They went to dinner at Boston Pizza. Shortly after, Joseph texted his father, asking what he thought of his new girlfriend.

Chris told his son he thought she was great: smart, thoughtful, kind and pretty. He asked his son what he thought.

"She's effin awesome," he replied back.

"We know exactly why he fell in love," Chris said Tuesday.

"She even got him to clean his room and make his bed which is a real feat in itself."

Joseph was the middle child, but loved joking with his mother, Andrea, that he was number one.

Hunter's older sisters called him "Logi Bear" because he was so good at giving hugs and always knew when they were needed.

"Some people might say time heals all. I haven't grasped that yet. Right now, it doesn't feel possible," he said.

"I do know one word that has brought me some inner peace. That word is love. I know our son Logan swelled with love."

Hunter was known for his strategic plays on ice. His nickname was Snipes — he has a  sniper-like ability to get the puck in the net in unexpected ways, Lawrence said.

His dog, Charlie, was his best friend, and when he wasn't playing hockey, he turned to another passion: golf.

"Logan, you are home now. Rest in the arms of our loving Father in heaven. All my forever love, son. Daddy."

Hunter's best friend, Ian Mitchell, remembers him as the friend who took his time getting his driver's licence. He was always mooching a ride and he was always willing to help him out.

"I was blessed to be able to grow up with a person like Logan. He was everything you could want in a friend," Mitchell said.

"This summer when we are sitting around the campfire, we will leave an empty chair and a beer for our friend."

Tobin was in his first season with the Broncos as a goalie after being traded from the Spruce Grove Saints in Alberta.

It was initially believed he was alive and recovering in hospital, but the coroner's office later said it had made a mistake and Tobin had died in the crash.

Tom Strangward, a broadcaster for the St. Albert Saints, said Tobin was a positive and thoughtful person. Strangward admittedly tried not to get too close to players out of concern for fairness in the game, but he got to know Tobin's family well.

Family friend Barb Potter spoke on behalf of the Tobin family. She said Tobin had a dry humour that likely came from his "Newfie roots." He was a goalie "through and through," she said, but also enjoyed playing floorball.

Tobin's teachers figured he might become a doctor someday. Others thought he might become prime minister. But Tobin really wanted to pursue a career in business and finance, a field that would have been perfect for him, she said.

"As a family and community we had the pleasure of watching this young boy grow into a young man. A young man with so much enthusiasm and so many plans for the future," she said.

Saying goodbye to Tobin is one of the hardest things she's ever had to do, she said.

"He would want us to remember all the good times that we shared with him and continue to celebrate his life," Potter said.

"We are all part of Parker's team."

Wack was the assistant captain of the Broncos and provided guidance to younger players.

He had been accepted to Simon Fraser University and Ryerson University for business school. He was known for his passion and talent for videography. He'd send daily photos and videos back home, eulogist Peter Gill said.

Wack was particularly close with his brother, Justin.

With his guide dog by his side, Justin said his brother's death has been like a "slapshot to the face."

"We may be out for a few games, we may be in pain and crying and we may think that things will never be the same. But we'll think things through, work hard to get better and get to a better place and respond to the best of our collective ability," he said.

"We'll overcome the adversity that this tragedy has caused and come back stronger than we were ever before. That is how Stephen lived his life and as his little brother, I can confidently say that that is what Stephen would want his legacy to be."

The Humboldt native attended Tuesday's memorial to pay tribute to the young players who lost their lives.

"These people who lost their friends and family, I feel their pain. I feel like I lost mine as well," he said.