Alberta Justice has launched an investigation after CBC News recorded video of a funeral home employee dragging a dead person in a body bag from a refrigerated trailer.

Alberta Justice has launched an investigation after CBC News recorded video of a funeral home employee dragging a dead person in a body bag from a refrigerated trailer rented by the Office of the Chief Medical Examiner to address a shortage of body storage.

On Monday, a CBC reporter witnessed a man in dark clothing searching inside the darkened trailer for the body he had come to collect. A source told CBC News the man was a funeral home employee.

Seventeen bodies, sheathed in white bags, lined the floor of the refrigerated semi-trailer parked in a lot behind the Office of the Chief Medical Examiner (OCME) off Belgravia Road in south Edmonton.

Once the funeral home employee found the body bag he was looking for, he grabbed the foot end with both hands. Shuffling backward, he dragged the body on its back about half the trailer's length.

After climbing down a ladder, he tugged on the body repeatedly to slide it onto an elevated gurney.

Warning: Some viewers may find this video disturbing 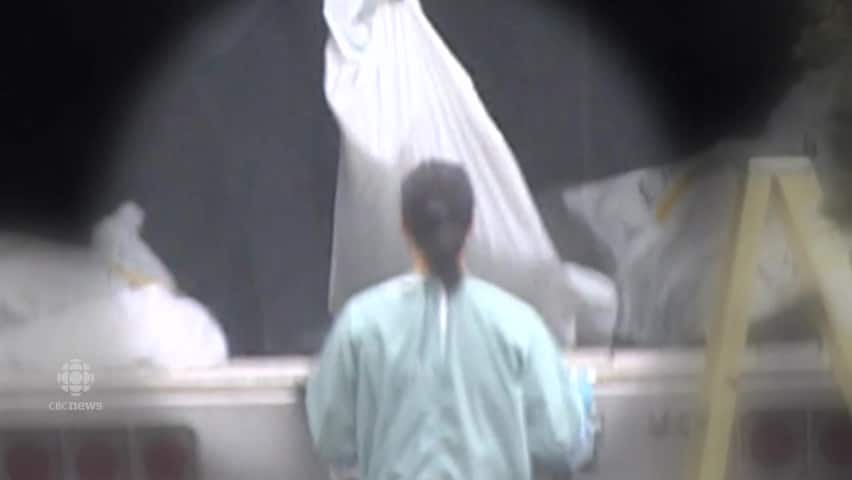 1 year ago
1:00
An investigation is underway after CBC News recorded this video showing a man dragging a body bag across the floor of a refrigerated truck being used as a temporary storage unit. 1:00

A waiting OCME attendant threw a white sheet over the body bag. It fell off but was replaced before the body was wheeled away on the gurney.

CBC News has learned the OCME took the unusual step on Friday of renting a refrigerated trailer to store bodies, in response to a sudden influx that overwhelmed the Edmonton facility's storage capacity.

"Dignity is expected to be shown at all times to the deceased, and the OCME guidelines appear to not have been followed," Dan Laville, a spokesperson for Alberta Justice, said in an emailed statement after being told CBC News had recorded the body-dragging scene, which was clearly visible from a public street.

"It is always a priority of the Office of the Chief Medical Examiner to ensure the deceased in their care are treated with the utmost dignity and respect. The claims of how one of the deceased in our care was handled are very concerning, and we are currently investigating."

CBC News has obtained internal OCME emails that show a staff member raised concerns with chief medical examiner Dr. Elizabeth Brooks-Lim about the propriety of storing bodies in a trailer.

In a Sept. 5 email, a staff person tells Brooks-Lim that if bodies are to be stored on the semi-trailer floor, "I feel that this might not be something that families will find acceptable. How do I approach this when speaking to families?"

In an email distributed to all OCME staff, Brooks-Lim responds: "The floor is clean, the bodies will be in body bags and the families do not need to be informed of the storage procedures."

'We cannot turn bodies away'

Brooks-Lim also dismissed the staff member's query about whether it might be cost-effective to buy more morgue tables. She said that wouldn't address the immediate overcrowding issue.

"We cannot turn bodies away," Brooks-Lim wrote, adding she is discussing long-term solutions to the storage problem.

Alberta Justice, in its emailed statement, said there are policies for how OCME staff handle deceased people, and "the OCME also expects the removal of the deceased by funeral homes chosen by the next of kin to be conducted professionally and compassionately."

NDP health critic David Shepherd said Wednesday that the UCP government must apologize to the families of the deceased and investigate how this was allowed to happen.

"Who authorized this decision?" Shepherd said. "Why did they not listen to the concerns that were raised by staff in the office that this would be something that would be considered a real indignity by families and other people involved in the system?"

Shepherd said, if necessary, the government must increase funding to the OCME so bodies are never again treated this way.

In an emailed statement Wednesday, Justice Minister Doug Schweitzer said he was disturbed by what he saw on the video.

"All Albertans, living or deceased, have the right to be treated with dignity, and any disrespect for the deceased or their loved ones is not reflective of our values," Schweitzer said.

"I have directed my department to investigate the matter and have been assured by the chief medical examiner that additional steps are being taken to ensure that the deceased are treated with the respect they deserve."

'Dignity of [the] deceased'

The OCME is re-issuing its guidelines to funeral homes and has added a temporary screen "to preserve the dignity of [the] deceased." The trailer is locked and monitored by cameras. A security guard is on watch 24 hours a day.

Laville, the Justice spokesperson, said the storage problem was created by an unusually high percentage of new death cases at the end of last week. He said the influx can require additional time for identification and for families to make arrangements with funeral homes.

But he said most bodies are collected within one to three days of the post-mortem examination, which occurs within 24 hours of a body's arrival at the OCME.

If you have information about this story, or information for another story, please contact us in confidence at cbcinvestigates@cbc.ca.