Amber Valley was one of several in Alberta and Saskatchewan settled by Black people from Oklahoma, Texas and other southern states, who were looking for a life away from racial segregation and violence.

Alberta's Amber Valley, settled by those fleeing U.S. segregation and violence, grew quickly in the 1900s

There isn't much left in Amber Valley.

There's a community hall, a few homes and a cemetery. Former residents say people driving by on the highway might not even notice it's there.

But they quickly add the almost forgotten community about 170 kilometres north of Edmonton has a rich history.

"Amber Valley was one of the biggest Black settlements in Western Canada," Ron Mapp, an Edmontonian who grew up in the community, said in an interview with The Canadian Press.

His great-grandfather, Henry Sneed, was one of the scouts who visited the area and then returned with the first wave of African-American settlers in 1910.

"They went from Edmonton to Athabasca by wagon train ... then from Athabasca to Pine Creek," she said. "My uncle said they had to blaze a trail as they went."

About 300 people settled in Amber Valley and the Canadian Encyclopedia notes that the population grew to about 1,000 by 1911.

The community was one of several in Alberta and Saskatchewan settled by Black people from Oklahoma, Texas and other southern states, who were looking for a life away from racial segregation and violence. 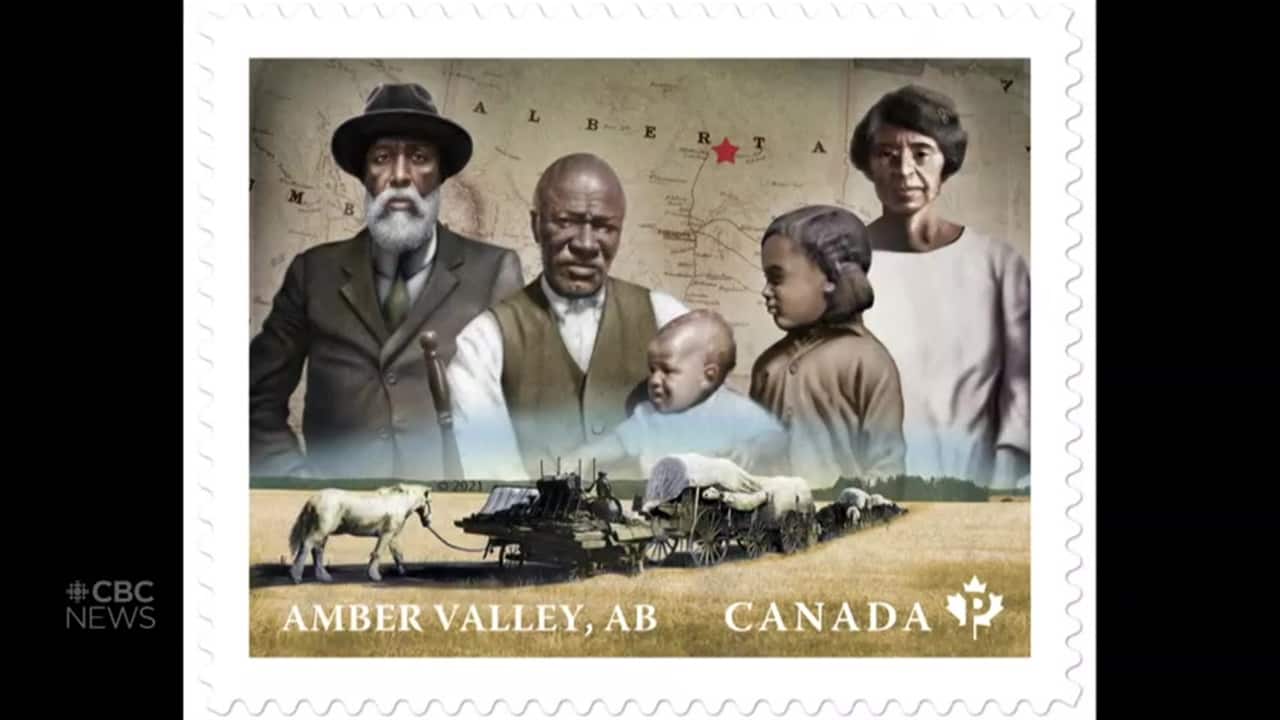 21 days ago
2:58
Bernice Bowen, one of the people pictured on a new Canada Post stamp honouring Black History Month, talks about this commemoration of Amber Valley. This was a northern Alberta community built by Black settlers from the United States more than a century ago. 2:58

They came to Canada in response to the federal government's Dominion Lands Act, which was passed in 1872 to encourage settlement on the Prairies.

'A part of our history'

Cheryl Foggo, an author, playwright and filmmaker in Calgary, said it's important for their stories to be told.

"We, in Canada, have done a very poor job of sharing our Black history widely," she said.

"Black history is just history. It is a part of our history and yet it is not widely known."

Foggo, a descendant of the migration to Saskatchewan, said Black families who settled in Canada brought rich cultural traditions and left a legacy of incredible contributions.

She noted engineer Oliver Bowen, who grew up in Amber Valley, managed the design and construction of the first line of Calgary's light rail transit system.

Musician Eleanor Collins, whose parents settled in the area, was the first Black person in North America to host her own television show.

Foggo said Black Americans who settled in Western Canada faced some pushback. Eventually, then prime minister Wilfrid Laurier passed an order-in-council to ban them from entering the country for a year. It never became law, but the government's actions effectively ended the migration, she said.

Foggo explained Black preachers were hired to go to the southern states with messages about how difficult it was to live in the cold and how Canada was just as racist.

Those who grew up in Amber Valley, however, said they have fond memories of the place.

"You knew everybody. Everybody was like your aunt or your uncle," said Mapp. "We had lots of fun growing up."

Mapp said his family experienced some discrimination, but noted it wasn't abundant and was often based on ignorance.

"Only education opens the mind," he said.

Gilbert Williams, whose father homesteaded in the Athabasca area, about 150 km north of Edmonton, gives tours at the Amber Valley Museum in the community hall.

"We have a homestead map, which shows the settlers that came to the Amber Valley area," he said. There was also a school, a post office and a church. "It was a well-established community."

Williams said a lot has been lost, but the museum helps people learn about Amber Valley through exhibits, a mural on the side of the building and a commemorative plaque.

Wisdom said the Amber Valley stamp collection, which has her aunt in one of the photos, has generated a lot of interest in the community.

Mapp's great-grandfather Sneed is also featured on the stamp.

"It's beautiful, but I don't know why they waited 110 years to recognize the district, or didn't teach it in any of the schools," he said. "So many people today say they've never heard of it.