From black-capped chickadee to downy woodpecker, pine grosbeak to snowy owl, Albertans are flocking to espy, snap and share what they’re spotting.

‘People really have been looking for ways to relax. It’s really stressful and watching nature is calming’

Meghan Jacklin is on a quest for winter birds.

"Personally I think it's pretty addictive once you get started, there's just more and more things to find," says Jacklin, conservation coordinator with Edmonton and Area Land Trust.

Today Jacklin is on the lookout at a pair of public bird feeders near picnic Site 1 in Hawrelak Park in Edmonton.

"This has lots of easy trails to walk along; it has lots of different habit, lots of forested areas, also open areas, the pond and right next to the North Saskatchewan River so all sorts of really cool areas that you can see different birds."

The biologist's top tips for birding include bringing along a field guide, whether it's a book or an app, to correctly identify your finds and binoculars.

"Birds tend to be a little bit flighty, so if you have binoculars you're able to see birds far away either out on the lake, out on the river, maybe through the window out to your bird feeder," she says. 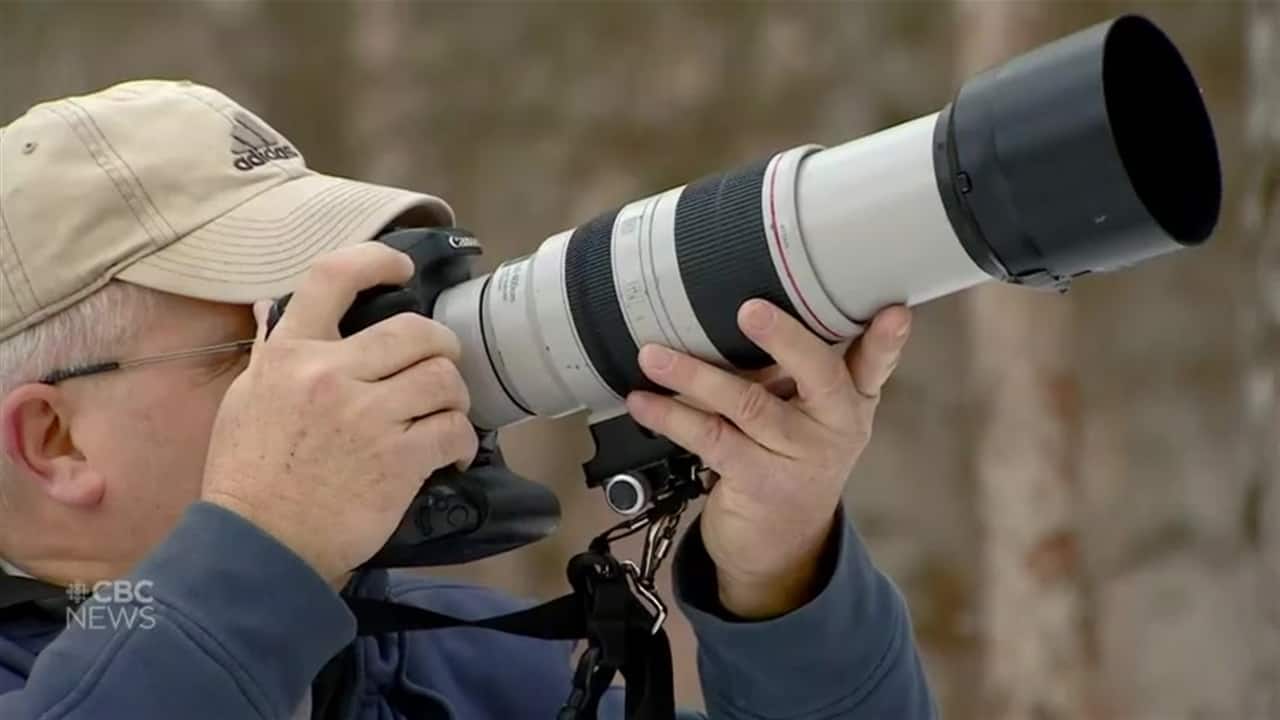 'Personally, I think it's pretty addictive'

1 month ago
2:10
Birdwatchers are flocking to spy, snap and share what they’re spotting across Alberta, even in the dead of winter. 2:10

You can see more from Hawrelak Park on Our Edmonton Sunday at noon and 11 a.m. on Monday and Tuesday on CBC TV and CBC GEM.

"I probably find most birds that I see first by hearing them," Romanchuk says.

Romanchuk says he became hooked on birding about 20 years ago.

"It's kind of taken over my life, I guess, except for work, looking for birds, photographing birds."

There are about 250 species in the Edmonton area and Romanchuk says if you're keen to get into birding, winter is the perfect time to start, "because the number of species is relatively low, so it's not too confusing or overwhelming."

During the past year he's noticed more and more people getting into the hobby.

"I think the pandemic, without other things to do, it's probably given it a boost, but I really think in the last five years the digital photography and social media has really changed things a lot," he says.

Charlotte Wasylik is a birder who founded and helps administer the Alberta Birds Facebook Group.

"We have 32,141 members," Wasylik says. "We've had astronomical growth since last March and we've added 13,000-plus new members since then."

She founded the group on a lark in 2012 to connect with like-minded birders and help identify what she was seeing around the province.

At this time of year the page is filled with images of winter feeder birds like black-capped chickadee, downy woodpecker and pine grosbeak.

"People love to share and there are some incredible photos on there, that even make me jealous," Wasylik says.

For many birders keeping track of what they have identified on a life list is part of the fun.

"It's similar, for people who might be familiar with collecting Pokemon; it's that same feeling for some, collecting rare species. A lot of birders have a list," says Wasylik, who has 385 species ticked off on hers.

"I think the feeling is joy," says Erin Dykstra, owner of Wild Birds Unlimited Nature Shop at 12204 107th Ave. "You can look out your window and just know the world is bigger than your own circumstances."

Dykstra says she has seen double the number of new customers this December compared to a year ago.

"It has been a surprise for us and a pleasant surprise," Dykstra says. Hot items include sunflower seeds and suet spreads.

"Another thing that really did fly off our shelves this year was our heated bird baths; we couldn't keep those in stock," she says.

Dykstra believes what has people flocking to birdwatching during the pandemic is the release it offers.

"People really have been looking for ways to relax. It's really stressful and watching nature is calming."