A new network of bike lanes in downtown Edmonton opened on Friday, but reviews were mixed. Pedal-pushers on two wheels said the lanes mean a safer and smoother ride. Some drivers said the lanes grind their gears.

As expected, motorists and cyclists divided over new bike network 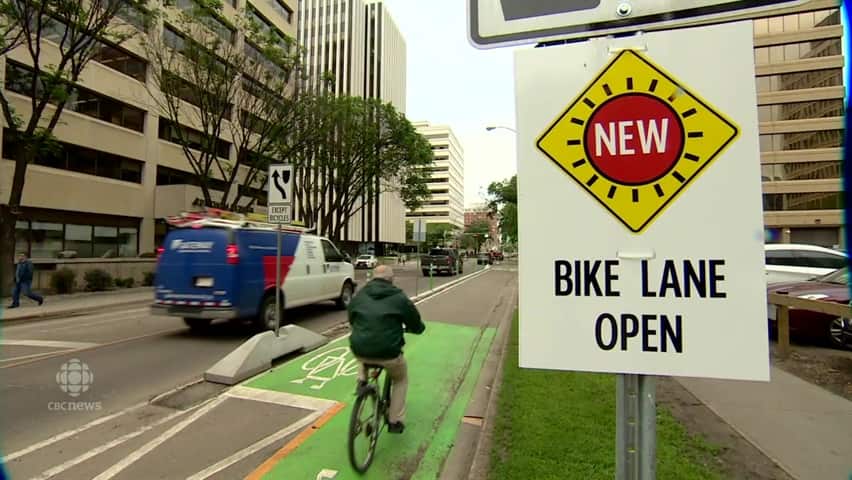 3 years ago
1:37
CBC's Scott Stevenson speaks to Edmontonians about the Downtown Bike Network on the opening day of the first phase. 1:37

A new network of bike lanes in downtown Edmonton opened on Friday, but reviews were mixed.

Pedal-pushers on two wheels said the lanes mean a safer and smoother ride.

Some drivers said the lanes grind their gears.

But if Friday's response is anything to go by, it's a safe bet the new lanes will see a lot of use.

The section along 100th Avenue between 103rd Street and 109th Street opened Friday. Other parts of the network will open over the next two weeks.

One of the first people to ride by after after the lanes were officially opened was Olga Messinis, project manager for the downtown bike network.

"The opening is going quite well," said Messinis. "Getting a lot of great feedback from a lot of cyclists."

The lanes will require some adjustment for both cyclists and motorists, especially the "bike boxes," which Messinis said can be confusing. The city has posted videos and instructions online.

"[They are] meant to carry you off the facility and onto a roadway that doesn't have a bike facility," she said. "Realistically, if you were coming out of a bike lane you'd have to be turning through two lanes of traffic which isn't a safe movement for cyclists."

The city will have "street team members" out soon to demonstrate how the bike boxes work, she said. "It doesn't necessarily flow as a natural movement but it is the safest movement to get yourself off the facility so we do expect that to be a bit of a learning curve."

Dan Sabo and his daughter Anna, 2, were quick to try out the new lanes. Sabo is aware of the bike boxes but hasn't had to use one yet.

"We have to test them out," said Sabo, who calls the lanes a big improvement. "We're going to try to use them as much as possible."

He said the separated bike lanes give him peace of mind when he's riding next to traffic.

"Definitely feels safer with it blocked off," he said. "We bike on 76th Ave. but it's not blocked off so you don't feel nearly as safe. This is much better for us."

Some drivers, meanwhile, weren't having a happy Friday.

"Look how much parking it's taken away," said motorist Gerald May. "Look at how much traffic congestion it's caused, and what for?"

May thinks the bike-lane network is a waste of taxpayers' money. He also questions whether the lanes will improve safety, and said he sees the lanes as yet another sign the city is moving toward a car-free downtown.

"So much traffic congestion," said Davendere Sharma, who drives for Co-op. He said he will try to avoid the downtown during the morning and evening rush hours.

And that will result in fewer available cabs in the core during peak hours, he said. He believes the city made a mistake.

"They should find more ways for the cars first, then the bicycles."

Barricades are making it more difficult for him to make turns safely, he said. "And especially with bikes going around it's a lot harder to see them. They're smaller then the cars, obviously, so it's a little bit of a hazard."

Preiss would prefer the lanes weren't there but understands the city's decision.

"I think that they're a good thing because we want bikers to be safe as well, but they do create a different kind of hazard with blocking the roads."

"Love it! It's fantastic!" said Shepherd. "Biking is my main form of transportation around downtown for just about six years now so having these protected lanes, it's a whole new experience. I think it looks really good on the city."

Shepherd expects the number of downtown cyclist to increase significantly now that the lanes are open.

"I've heard from a lot of people, and especially families. Now they say, 'Well, that's fantastic, you've got protected lanes, now I can ride with my family down to the festivals in Churchill Square and check out some of the other stuff downtown.' "