Tears, hugs and wagging tails as families met their autism service dogs in Edmonton on Monday.

‘It's security; it's companionship for my son; it's everything I've been waiting for’

There were tears, hugs and wagging tails as families met their autism service dogs in Edmonton on Monday.

Damian and Nicole Smith met Jagg, a Labrador retriever who is finally ready for the job, after two years of service dog training with the Edmonton organization Dogs with Wings.

The Smith family has been waiting five years for this day.

"It's like you have been holding your breath underwater and then suddenly you can actually take that breath of air," Nicole Smith said.

"It's security; it's companionship for my son; it's everything I've been waiting for."

Their son Xavier, 10, was diagnosed with autism spectrum disorder in 2012.

Jagg will ease some of the stress of daily family routines once they bring him home to Slave Lake, she said.

"I can't browse when I'm in stores. I have to have a purpose: get in get out," said Smith.

"We don't normally do restaurants or movie theatres, it's just not normally something he can sit through.

"We're hoping to...maybe go to a family restaurant, maybe go to the movies, everyday stuff that other families can take for granted." 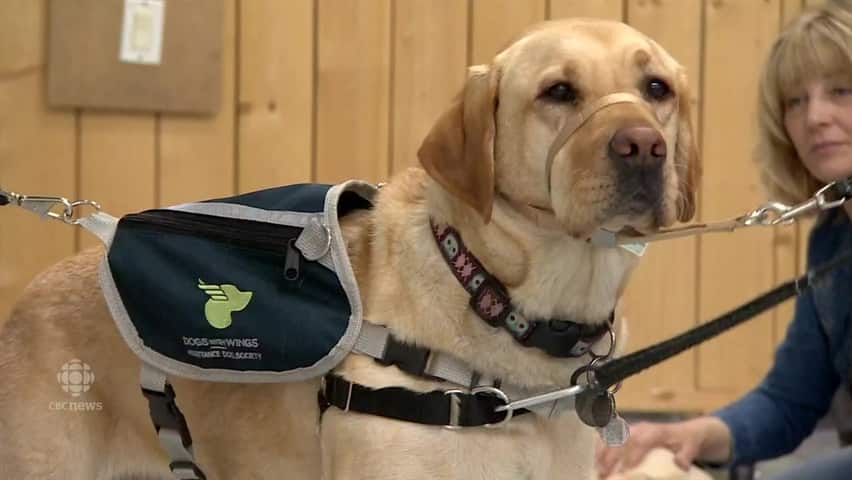 1 year ago
2:03
After five years of anticipation, two families are finally introduced to their autism service dogs. 2:03

Children diagnosed with autism spectrum disorder can sometimes be sensitive to their environment and may try to wander off for reasons that are not always obvious to their parents.

Jagg was trained to act as an "anchor."

If Xavier tries to run off in a public space, Jagg is supposed to plant his body in place and pull back Xavier, who will wear a belt that can be tethered to the leash.

"Jagg will provide an anchor for my son so that way we will be able to look for that moment when he decides to take off," her husband Damian said.

"Jagg will stop and, he'll make sure that [Xavier] will not be able to go far, so Xavier can be safe," Damian Smith said.

The Waye family has also been waiting five years for a service dog.

Heidi Waye said she hopes that their new dog Juna, will also provide emotional stability for their nine-year-old daughter Naomi.

"She really loves dogs, from the time she was a baby," Waye said.

"She connects with dogs in a way that she doesn't with humans," she said, "And this can be a bridge between her and that world."

Her husband, Kris Waye, said that Naomi is excited to see Juna and has been drawing pictures of the dog in preparation. But Kris thinks Naomi might need some time to adjust to the transition when she first meets Juna.

"She expresses it a little differently than we do. I think she'll get a little quiet," he said.

"I know she'll have an explosion of emotions and not know what to do with them, so she'll be happy she'll be excited, it's a lot all at once."

The parents have six days to learn how to instruct their dogs.

The Smiths said Xavier isn't that familiar with dogs, but they do have a cat at home that their son regards as "a saint."

Damian Smith said he already feels ready to introduce their dog Jagg to their son Xavier this weekend.

"My life is about to change for the better and I can't wait."