After 51 ATM thefts or attempted thefts in Alberta between January and October in 2019, gas station and convenience store owners are living in fear of being the next target. 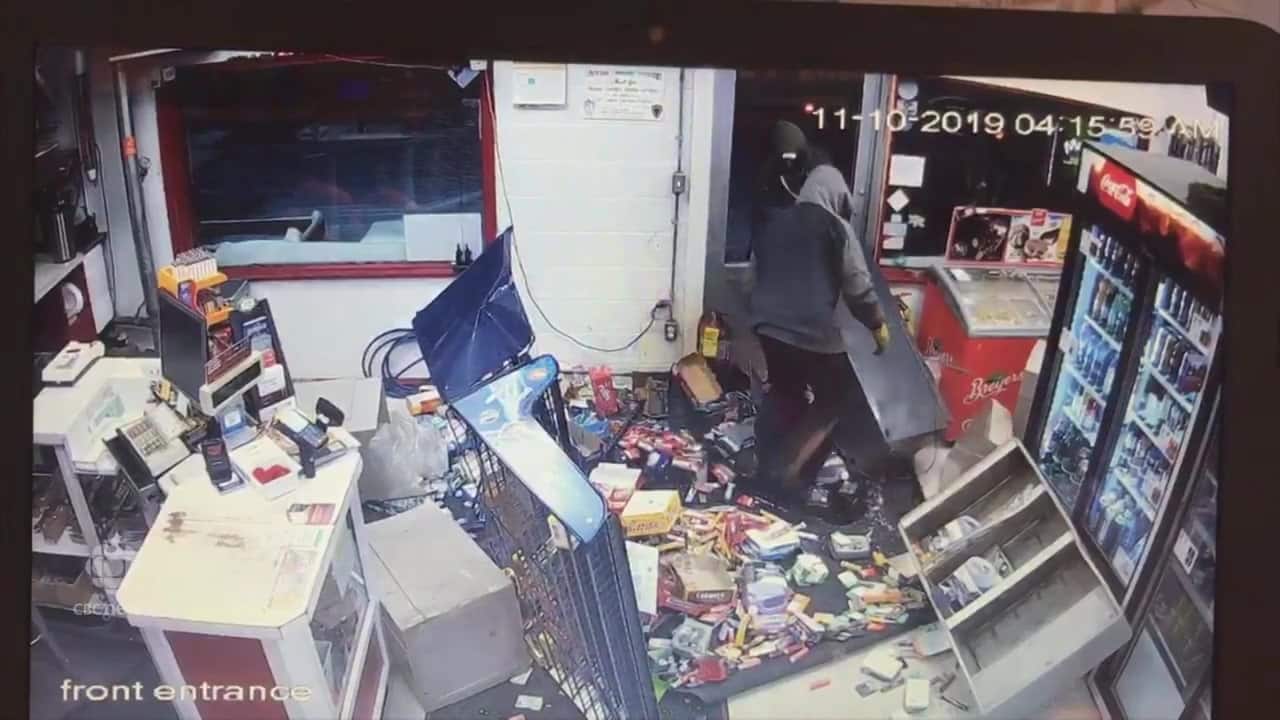 The security camera captures a man in a grey hoodie jumping through the shattered front door, tow strap in hand. A second person outside feeds more strapping into the store.

Seconds later, the man leaves, the tow rope tightens and an automated teller machine thrusts forward, crashing through a candy shelf and slamming into the door.

The man returns through the door, lifts the cash-dispensing ATM and heaves it through the opening.

Meanwhile, Megan Reuteman, manager of the Moose Country Petro Canada in Whitecourt, Alta., 180 kilometres northwest of Edmonton, receives a notification on her cellphone, which is connected to the gas station's security system.

It's 4 a.m. MT when she calls 911. By the time police arrive, the suspects are gone, leaving Reuteman's family, which owns the building, facing $25,000 in losses.

"Attacks upon ATMs inside businesses, including the theft of these machines, continue to be an ongoing issue," said Fraser Logan, a spokesperson for the RCMP.

There were 51 ATM thefts or attempted thefts in Alberta between January and October in 2019, a typical year, according to RCMP.

It's enough that gas station and convenience store owners live in fear of being the next target.

"Business people, they're calling me, you know, saying 'This is enough, we can't take this anymore,'" said Barry Sharkawi, president of the chamber of commerce in High Prairie.

"They are upset," Sharkawi said. "Not just that they are scared about the break-and-enters, but they're asking, 'Who's next?'"

On Nov. 21, Sharkawi posted an image of a heavily damaged Circle K convenience store, one of the latest businesses to be targeted.

"Something has to happen regarding security of the town," Sharkawi said in the Facebook post. "If this keeps happening, it will scare anybody to come and invest in High Prairie."

Some thefts are more brazen than others.

At 4 a.m. on Sept. 20, four masked suspects — one armed with a gun — broke into the Tofield Esso, held two gas stations employees at gunpoint and ordered them to move to an adjacent room. The suspects tried to steal the ATM but RCMP showed up before they could complete the heist.

RCMP chased the suspects for a short period of time but no arrests were made.

An ATM theft in early November at the Petro Canada in Cornerstone Plaza in Slave Lake was followed by a theft a month later at the town's rec centre.

The thefts leave business owners wondering if having an ATM is worth the headache.

"We haven't replaced it. We're still deciding if we want an ATM back in our store," Reuteman said.

"Things are not cheap," she said. "[Replacing] the garbage cans, like, you just think it's a garbage can, but because you have to get specific ones from Petro Canada, they're $150 each."

For Sharkawi, enough is enough.

Anya Zoledziowski is an award-winning multimedia journalist who joined CBC Edmonton after reporting on hate crimes targeting Indigenous women in the US for News21, an investigative journalism fellowship based in Phoenix, AZ.