Financially troubled Athabasca University spent more than $125,000 in less than three years on lobbying firms in a failed attempt to increase its funding from the provincial government. 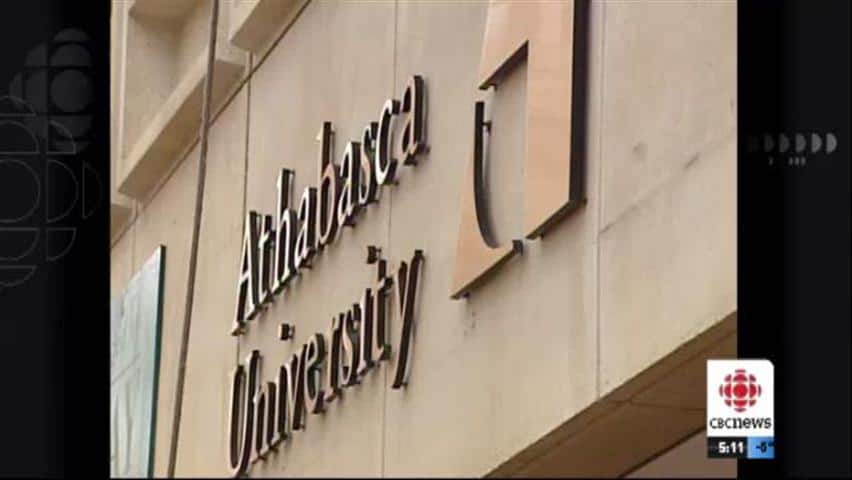 Financially troubled Athabasca University spent more than $125,000 in less than three years on lobbying firms in a failed attempt to increase its funding from the provincial government.

Documents obtained by CBC News show that from May 2006 to December 2008, the university entered into four lobbying contracts; the biggest was more than $50,000.

"It is unreasonable for you, as the president of a post-secondary institution, to be able to pick up the phone and speak to the minister of advanced education?" McAllister asked. "It ought not to be."

Three of the four contracts were signed with Bill Donahue, an Edmonton lobbyist who represented Prismatic Group, and later, Bill Donahue Associates.

Donahue is a well-known Conservative supporter who ran as the party’s Edmonton-Centre candidate in the 2008 provincial election.

Among his stated objectives were to "advance and secure funding and support" for an e-learning research institute, as well as new campus buildings. Donahue was also tasked with "positioning Athabasca University as an equal university partner in Alberta."

The fourth contract was between the school and the American firm Washington Partners, LLC. Athabasca paid the group $7,800 for 42 days of work to advance various Athabasca "priority agenda items."

"I was stunned that the university dropped a hundred and twenty-five grand on lobbyists," Athabasca University professor Bob Barnetson said. "That boggles my mind."

But Barnetson, who specializes in labour relations, also said it was no surprise because the university was desperate for more funding at that time. He said he views the lobbying contracts as another part of a strategy to obtain more money from the provincial government.

Athabasca Board Chair Barry Walker conceded the university made the donations because it was "trying to develop a relationship with the government at the time, trying to further our needs as far as funding and the like."

"It is public knowledge that probably 35 to 40 per cent of our entire funding comes from the government," Walker told CBC in March.

Several unions at the university called for president Frits Pannekoek’s resignation in part because of the illegal political donations but also because of what they viewed as the gross mismanagement of the university’s finances.

Barnetson said faculty were told "about three or four years ago," that the government wouldn’t be giving Athabasca any more money, "because we had too much money in the bank."

He said the university then began to draw from a reserve fund containing approximately $30 million – "basically trying to look broke in order to gain more government funding."

Barnetson said that between 2007 and 2011, the university spent all but a few hundred thousand dollars of the reserve fund on new programs and infrastructure.

"Many of us thought that that was a pretty high-risk, high-consequence strategy because if the money didn’t show up, we were going to be hooped," he continued. "And the money hasn’t shown up, and we are hooped."

Athabasca University has reported deficits in its operating budget for the past five fiscal years. At one point, expenses exceeded revenues by more than $11.5 million.

In its latest annual report, the university stated that it requires a funding increase to maintain its mandate, and that in recent years, the school has had to meet "unfunded indirect costs" of $15 million per year.

"While the recent freeze on university operating grants and the province’s fiscal position have been deterrents to a ready resolution to this issue," the report continued, "the university will continue to reinforce its position with government."

"In the meantime [the university] will continue to meet these fiscal realities through a continuing hiring freeze, by increasing efficiencies and by slowing or deferring a number of planned activities."

Two weeks ago, the school unexpectedly announced the departure of four senior administrators. And, in an email sent to all university staff on Feb. 25, Pannekoek, Athabasca’s president since 2005, confirmed that he is stepping down.

"As many of you know, I indicated to the Board chair this past fall that the university should start its search for a new president," wrote Pannekoek, who is in the middle of his second term.

"Once a new president has been selected, I will retire."

"At the time, we were the only university in Alberta that did not have the [government] relations person on staff," he said, adding that his position was only created in mid-2007.

Tait said he took over the government relations work from Bill Donahue Associates once he became acquainted with the duties of his job.

McAllister blamed the Conservative government for creating a system in which post-secondary institutions feel compelled to "cozy up" to politicians and other government insiders for funding.

"The culture in Alberta is definitely one of entitlement," he said. "It’s who you know, how do you advance your cause."

"So it’s not Athabasca doing something wrong. We were following suit with everybody else."