First of its kind in Canada, amiskwaciy Academy turns 20

When amiskwaciy Academy opened 20 years ago, it was considered groundbreaking and still is, says principal Fred Hines.

'I consider everyone here family'

When amiskwaciy Academy opened 20 years ago, it was considered groundbreaking and still is, says principal Fred Hines.

"We're very proud of who we are and what we do here," he says.

Hines has been at the helm of the Grade 7 to 12 Edmonton public school, which is steeped in Indigenous language, culture and traditions, for the last decade. 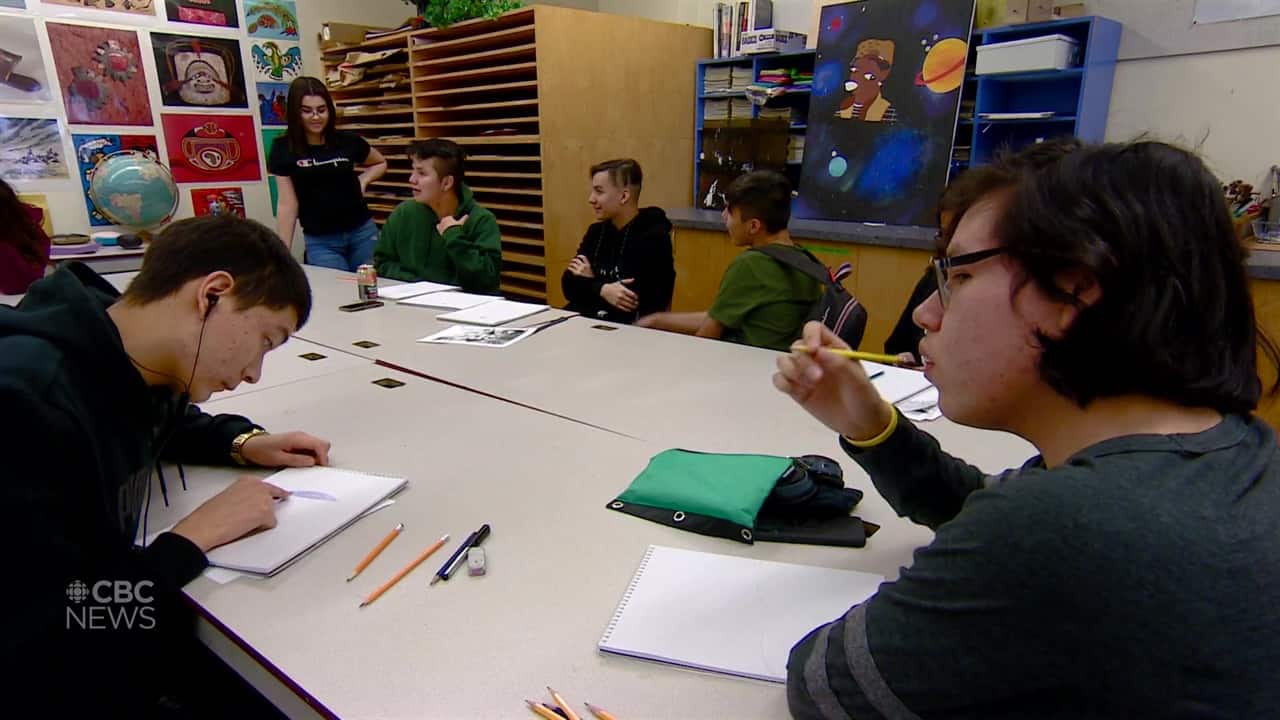 'Giving our kids a fair shot at education'

You can see more from amiskwaciy Academy on Our Edmonton Sunday at 3 p.m. and Monday and Friday at 11 a.m. on CBC TV and the CBC GEM.

"We have strong academy programming, but we also want to make sure our kids are getting strong cultural teaching," Hines said.

The academy, on the grounds of what was Edmonton's city centre airport, was the first Indigenous public high school of its kind in Canada when it opened two decades ago.

About 200 students from across Western Canada attend the school.

Founding principal Phyllis Cardinal died in 2016 but the academy is part of her legacy.

In 2000, only a quarter of Indigenous students in Alberta were graduating high school. Cardinal believed students needed to learn together from Indigenous teachers.

The school's name, amiskwaciy, with a lower-case a, is the Cree word for Beaver Hills. The Cree called the Edmonton area Beaver Hills House.

The academy has a sweat lodge in the courtyard, a teepee in the cafeteria and smudging ceremonies in tradition rooms.

Originally from the Kainai Nation, Treaty 7, near Lethbridge, Alta., the 18-year-old says before moving to the academy she was bullied.

"When I transferred over to amiskwaciy, all of that dissolved. We walk down the hallway we see traditional words, we talk to each other using our languages and we can understand one another," she said.

"That encourages me to get to school every single day on time because I don't like to miss it. It's really become a part of me."

For Larissa De La Salle, being a student at amiskwaciy has encourages her to explore her artistic side. "That's where l learned how to bead," she said sporting a pair of earrings she crafted.

"These are actually the second pair I made, it was hard at first, but after awhile it gets really easy and it kind of just calms you down," said De La Salle, 17.

The Grade 12 student said she knew little of her culture or her family's past before attending amiskwaciy.

Now De La Salle can trace her connections to both the Elizabeth and Peavine Métis settlements in central Alberta.

She said the bond between staff, elders and students at amiskwaciy is strong.