First leader of new party to be elected Oct. 28

Alberta's two conservative parties have struck a tentative deal to unite as the United Conservative Party.

"This is a great day, a historic day for Alberta," Kenney said. "Together we have decided to put our province ahead of our parties."

Jean urged Wildrose members to ratify the agreement to create the new party.

"It's about unifying conservatives," Jean said. "It cannot be based on a principle of gaining power for power's sake. It must be about more than that."

The date for members of both parties to vote on the agreement is July 22, with a new leader to be chosen Oct. 28. The new party would have its founding convention in early 2018.

An interim leader will be selected by caucus members of the PC and Wildrose parties as soon as possible after the agreement is ratified.

The nine-page agreement contains a number of founding principles, including support for free enterprise, grassroots democracy and "compassion for the less fortunate expressed through progressive social policies that help people become self-reliant, and ensure equality of opportunity."

Some members of the Progressive Conservative Party oppose a merger with the Wildrose Party, which they see as too socially conservative. Kenney said PC members who have doubts should come forward and share their views.

"If this agreement is ratified, this is not the end of a proud legacy but instead it is a fresh start and a new beginning," he said. "A chance to renew a political family which has been divided for the past decade."

If the deal is not ratified, the PC and Wildrose parties will work out a non-competition agreement in time for the next provincial election.

Both men said having conservatives united in a single party is crucial for defeating the NDP in the next election.

"This agreement ensures the defeat of this disastrous NDP government and the election of a free enterprise government that will renew the Alberta advantage," Kenney said.

"But it's worth it," he said. "This is about the future of Alberta, and generations of good government means we will have a good economy and a great quality of life."

Both Jean and Kenney have said previously that they would be interested in running to lead the new party.

When the question was put to him at Thursday's news conference, Kenney said he would say more once the deal is ratified.

"Clearly we're both running for the leadership of this new party," he said. 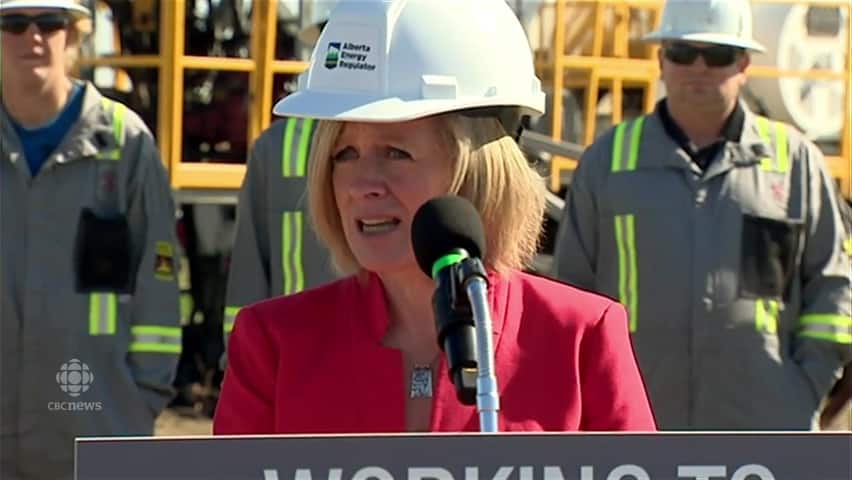 'They may fall right off the map. I guess if they do, they’ll have company'

4 years agoVideo
0:34
Premier Rachel Notley reacts to the Alberta Wildrose and Progressive Conservative parties' agreement on a merger near Carstairs, Alta. on Thursday. 0:34

"Whether it's the Wildrose or the Tories, they clearly agree on things like making massive cuts to services in order to finance tax breaks for people at the top of the one per cent," Notley said Thursday at an announcement in Carstairs, 65 kilometres north of Calgary.

"They agree collectively on the fact that they're not particularly sympathetic or supportive of LGBT rights," the NDP premier added.

"They can't seem to agree that a school lunch program is a good thing, at least not with us can they agree.

"So, they're a group that are moving increasingly to more and more extreme positions, to the point where they may fall right off the map. I guess if they do, they'll have company."

In a news release, Greg Clark, leader of the Alberta Party, described the Wildrose/PC merger as a "hostile takeover.

"The stream of PC supporters who have been leaving will quickly become a flood as they come to understand it is no longer the party of Peter Lougheed, but a return to what Peter Lougheed fought against," Clark said, adding that Albertans "reject polarized politics."

The Wildrose has previously said it will need 75 per cent or more of its members to OK the deal, while the Progressive Conservatives say they will require a simple majority of 50 per cent plus one.

A group of representatives from both parties has been meeting for the last two months to hammer out a deal.

One of the issues both sides needed to discuss was what to do with the finances of their respective parties.

Money from the PC and Wildrose parties will not go to the new party.

The PCs are in debt. They will ask the constituency associations to contribute to their individual war chests.

The Wildrose will not forfeit any of its money to the Crown. Elections Alberta has provided the party with a list of legal ways to use the funds.