Alberta will get nearly $700 million in infrastructure money "immediately" to spur a flagging economy flattened by low energy prices.

The federal and Alberta governments made the announcement after Prime Minister Justin Trudeau met with Premier Rachel Notley in Edmonton on Wednesday.

The money from the Building Canada Fund was announced in late 2014 by the previous federal government but never made it to the province.

The prime minister said the funding can be "allocated immediately to projects that will help Alberta's economy, help Albertans get to work and, indeed, contribute to the growing of our nation's economy."

Notley said both governments have been discussing what projects can go ahead and how the money can get to Alberta faster. The Alberta government announced in last fall's budget an ambitious plan to spend $34 billion in capital projects over the next five years.

"We, today, were able to confirm that the federal government will start pushing it out the door as soon as we're ready to go," she said. "So we really are talking a matter of months, weeks to months. Very soon."

'We've lost a lot of revenue'

The federal government also plans to grant the $250 million requested by Alberta under the fiscal stabilization fund to make up for the financial impact of low oil prices on the treasury.

"We've lost a lot of revenue," Notley said. "So we need to try and find other sources and this is one."

Notley said she also discussed changes to the employment insurance program. Benefits are tied to the unemployment rate of a region. Due to historically low unemployment rates, Albertans must work more insured hours to qualify for benefits and they get paid for fewer weeks than do people in other parts of Canada. Trudeau said his government plans to work quickly to change those guidelines.

"This is something that the premier emphasized in our meeting and I assured her that we are looking at this and working to move forward on it as rapidly as possible," Trudeau said.

Federal Infrastructure Minister Amarjeet Sohi said $10 billion in new infrastructure money earmarked for the next two years will be allocated following the budget.

Meanwhile, the government is working with all provinces on fast-tracking cash but he said some didn't get the funds they were entitled to.

Wednesday's meeting was the first between a Canadian prime minister and an Alberta premier in Edmonton since 2005, when Paul Martin met with Ralph Klein.

Notley walked down the steps of the Alberta legislature to greet Trudeau as he emerged from his car. The two leaders hugged and walked into the legislature together.

Notley and Trudeau briefly posed for photos before starting their hour-long meeting. They hosted a half-hour media availability starting at about 5:15 p.m. MT.

After the news conference, Trudeau and Notley toured an Edmonton training facility run by the International Brotherhood of Electricial Workers. 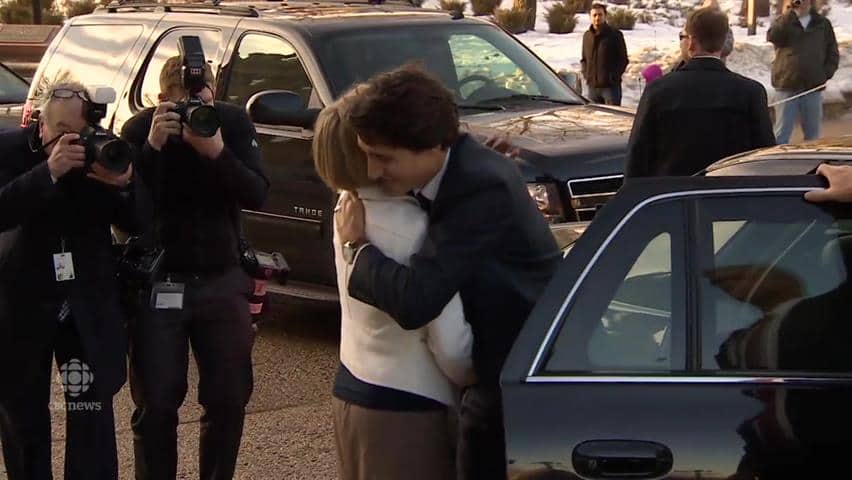 5 years ago
0:23
Prime Minister Justin Trudeau arrived at the Alberta legislature to meet with Premier Notley 0:23

Notley and the prime minister also discussed climate change and ways to get Alberta oil to world markets.

On Tuesday, Notley signalled that she intended to tell Trudeau how Alberta hasn't needed help for for awhile.

"We have truly been a fundamental part of the Canadian economy, doing some very heavy lifting for a very long time ... but we need the support of our colleagues across the country in the next short while."

The province's oil sector is also looking for strong signals that Trudeau is serious about helping deliver its commodity to tidewater.

Mark Scholz, president of the Canadian Association of Oilwell Drilling Contractors, said federal support on the contentious issue of building pipelines is crucial.

He warned if the industry can't get its product to market, Alberta businesses would fail.

Instead, Morneau said the federal government's upcoming budget will include spending plans to invest in Canada's entire economy, which he argued will help struggling provinces such as Saskatchewan, and Newfoundland and Labrador, as well as Alberta.

The prime minister is travelling to Calgary on Thursday where he, Notley and Natural Resources Minister Jim Carr will take part in a roundtable with oil and gas producers and oil and gas service providers.

This is Trudeau's first visit to Alberta as prime minister. He and Notley met at the provincial legislature in June, during a visit to Edmonton and Calgary before the Oct. 19 federal election.

Notley joined the prime minister as part of the Canadian delegation that attended the Paris climate change talks in late November.