In 2013, a 13-year-old boy in Alberta shot and killed his father -- a man who had been a malevolent presence in the life of the boy and his family for years. The CBC's Janice Johnston tells the harrowing story of Joey, the father who terrorized him, and the heartbreaking details that emerged at Joey's trial. 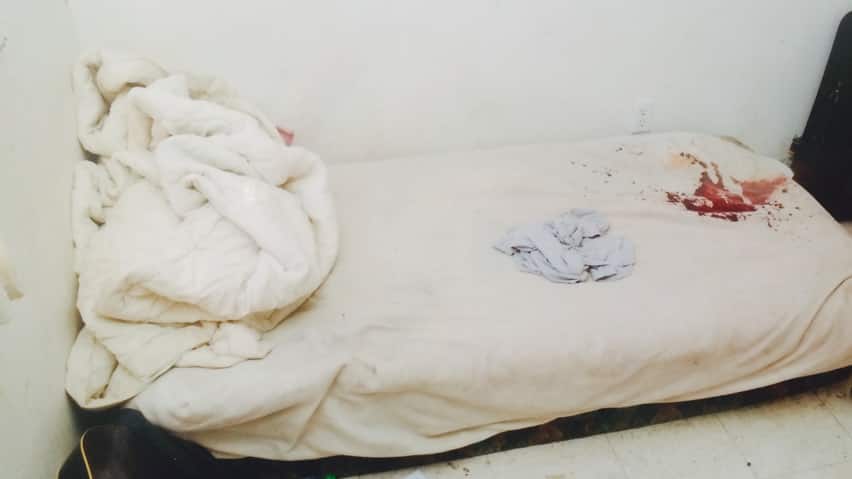 Alta. teen found not guilty in death of father: self-defence

5 years ago
1:48
Years of physical abuse by his father directed at the entire family came to a close for the 13-year old boy with a final death threat 1:48

Joey's mistake one day was sitting down on the couch and accidentally spilling his father's snuff all over the floor.

"He got mad at me. Told me to go to the bedroom. And then he came in with the wire. He started hitting me. I couldn't do anything."

Joey is not his real name.

Under the Youth Criminal Justice Act, he can't be identified because he was charged with the second-degree murder of his father.

On Wednesday, he was found not guilty in a High Level, Alta., courtroom. He had spent more than two years in custody.

CBC was the only news agency in the courtroom.

The killing of a parent is a rare crime, experts say. It's even rarer to be found not guilty.

During the trial, the teenager took the stand in his own defence.

In a halting soft voice, the 15-year-old recalled the years of abuse from his father, stopping to wipe away the tears.

"He hit me so many times with the wire," he told court. "My legs, my body and my arms. I don't even know how many times."

Joey explained what led up to the morning he took a high-powered rifle and shot his 47-year-old father twice at close range — first in the thigh, then the abdomen.

He remembers the first time his father hit him. He was only seven years old.

His father pleaded guilty to a number of assault charges.

He was mad almost every day.- Joey, speaking about his father

He hit his young son with a stick. He used the same stick and a belt on another son and two of his daughters. He also admitted he threatened to kill his wife.

In 2007, the father was given a five-month sentence and two years probation.

Then he went back to his family. Joey says the abuse continued.

Majaesic asked, "Had he ever threatened to kill you?"

"How many times?" Majaesic said.

"Too many times to count," Joey answered.

She was difficult to understand because all her upper teeth are gone.  She said her husband knocked them out with a belt buckle. Permanent lumps, cuts and scars cover her head and face.

"He broke my nose three times," she said.

In the spring of 2013, Joey said his mother was in hospital on life support because "she was forced to drink and she was getting choked by my dad."

The teen alleged his older brother was also hospitalized because his father was giving him pills for diabetes. The brother didn't have diabetes.

"My dad threatened to kill my brother so he gave him those pills," Joey said.

Joey's favourite older sister also ended up in the hospital. She suffered a miscarriage after her father pushed her into the bathtub. She attempted suicide.

Joey was still trying to finish Grade 6. He and other members of his family were put into foster care temporarily because his mother was in the hospital.

He said his father tried to run him down with his truck, along with his brother and sister.

That's when they turned to the RCMP for help.

The father was charged with nine assault-related criminal offences and ordered to stay away from the family. He moved to another remote northern community to live with his father-in-law.

That worked for about a month. Then, early in August 2013, the father asked his wife to come for a visit.

She loaded up her children and made the two-hour trek to see her husband.

On the witness stand, Majaesic asked her: "Why did you keep going back to a relationship with him?"

She responded: "I was scared of him."

"What did you think would happen if you didn't go back?"

'I couldn't stop him from hurting my mom'

After she arrived, the drinking began. That Sunday night, the children couldn't sleep. The adults were making too much noise.

Around 4 a.m. the violence began.

Joey said his parents got into an argument that quickly became physical.

"He grabbed her by the head and pushed her down to the floor," he said. "And he threatened to kill her.  And he said 'You should be dead.'"

His lawyer asked: "Did you try to do anything to stop that?"

"I couldn't stop him from hurting my mom," he said, fighting back tears.

Joey went to another bedroom in the four-bedroom house. He said he could hear his mom telling his dad to stop.

"But he wouldn't stop. I don't know what he was doing. Probably beating her up."

The mother later explained what was going on: "He hit me in the head and kicked me in the back three times.  He said he was going to kill my dad and the kids and me."

Joey stayed in the other bedroom, desperately weighing his options. "I was scared and angry. I didn't know what to do."

There were six guns in the house. Joey chose the most powerful one — a 30/30 Model 94 lever-action Winchester rifle. The kind used to take down a bear or moose.

Then he found a package of full metal jacket bullets. He loaded two in the chamber.

The 13-year-old walked down the hallway toward his parents.

'You got 3 seconds to leave'

He said his father spotted him and the anger ratcheted up.

"And then he said: 'You got three seconds to leave or I'm gonna kill you. You and your mom.'"

Joey said he believed the threat. On the witness stand, his voice cracked as he recalled, "Then he looked at me.  And then I pulled the trigger."

He began to cry softly with his head bowed and continued. "I shot him in the leg."

But his father was still alive, rolling around on a blood-soaked bed and becoming even more angry. Joey fired one more shot.

The second bullet hit the 47-year-old in the abdomen, causing what the medical examiner would later call "a lead snowstorm" in the victim's abdominal cavity.

Joey left the house with the rifle. He joined his adopted brother and little sister in front of the house.

The adopted brother testified Joey told him, "If I didn't take the 30/30, he would shoot himself." The other boy took the gun.

Hours later, Joey was arrested and charged with the murder of his father.

Joey spent more than two years in custody at the Edmonton Young Offender Centre. He was never granted bail. His lawyer said Joey has essentially been alone in Edmonton.

"Very little contact with his family," Majaesic said. "And that hasn't been easy."

In his closing submission, Majaesic asked Justice Paul Jeffrey to find his young client not guilty.

He said, "I would submit there was no reasonable alternative for Joey that evening," he said. "There is a compelling case for self-defence and defence of his mother."

"He went into that room to wreak vengeance," said Brydon. "He'd had enough. He snapped. This was certainly not self-defence."

Justice Jeffrey deliberated for two hours and found the teenager not guilty. His written reasons aren't released yet.

Joey showed little reaction in the courtroom. His lawyer thought the teenager was likely in shock.

Majaesic said he hopes a better life lies ahead for Joey.

"He is not a murderer. I think he's very sad about what happened. Devastated in fact. But I'm happy he was found not guilty."