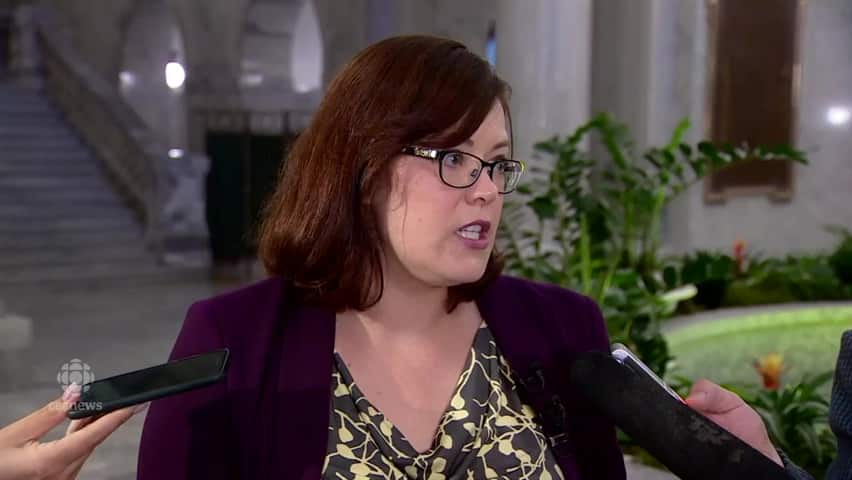 What consultations about police street checks hope to achieve

3 years ago
0:43
Justice Minister Kathleen Ganley talks about the need for clarity on what police officers can and can't do when seeking information from the public. 0:43

Close to 100 organizations are being asked to share their views on street checks as the province aims to regulate the police practice of randomly stopping and documenting people in Alberta.

The public consultation will be conducted through a written survey, and in-person sessions.

Groups will be asked to share their experiences about street checks as well as views on police officer training and the collection of personal information. The province expects additional groups to wade in as the approximately six-week process gets underway.

"We're looking to work towards a guideline that would ensure that the rights of the public are protected but still allow community policing and engagement between communities and the police," said Justice Minister Kathleen Ganley, in an interview with CBC News Wednesday.

"We don't want to limit police to only talking to folks who are arrested or detained because we think there is an expectation to have those more positive interactions as well.

At the end of the day a provincial guideline will hopefully provide clear and consistent rules that everyone can follow.- Justice Minister Kathleen Ganley

The formal launch of consultations follows a CBC News investigation in June that revealed over a five-year period Edmonton police disproportionately stopped, questioned and documented Indigenous and black people.

A week earlier, data released by lawyer Miranda Hlady showed people of colour were more likely to be carded than others by the Lethbridge Police Service.

Some community advocates insist those statistics are evidence of racial profiling. But police forces in both Edmonton and Lethbridge contend street checks are not motivated by race, and play a key role in preventing and solving crimes.

Critics say there is no data to support that argument and random stops erode trust between police and communities. Groups such as Black Lives Matter Edmonton, which also released a report on street checks in June, are calling for an end to carding.

"We welcome this dialogue and we have already started the conversation with Edmonton police to do a policy review on carding," said Ahmed Abdulkadir, Ogaden's executive director, who has previously spoken out on the harm caused by street checks.

The Alberta Association of Chiefs of Police issued a statement expressing support for the consultation but emphasizing the value of street checks in investigations and public safety.

"The ability for a police officer to interact with a citizen at any time must not be hampered by restrictive policies or regulations," the statement warned. "It is essential that police maintain the confidence of their communities, while conducting their operational practices in a manner that is lawful, respectful and appropriate. Street checks in Alberta have always followed all applicable Canadian laws, and will continue to do so."

Lawyers, civil rights groups, victims' service agencies and associations such as the Alberta Urban Municipalities Association will also be consulted.

"We're hoping to have a good conversation and obviously people have some fairly strong views on this issue," said Ganley.

"I think everyone thinks that it's important for everybody's rights to be protected. Everybody thinks that community safety is important so I think at the end of the day there is a lot of areas of overlap and I think we're hoping to find as many of those as possible."

Over the past two years, as Ontario moved to regulate carding, the practice has increasingly come under fire in Alberta.

Apart from racial profiling, critics have raised concerns about the data itself — which is subjectively collected, uncontested and retained indefinitely. They argue it can unfairly prejudice future interactions with police officers and have additional consequences when shared with other law enforcement agencies such as the Canadian Border Services.

Critics also question whether those being stopped by police can, without repercussion, exercise their right to walk away.

Alberta Justice has already met with groups impacted by street checks and with police, who Ganley said are "very willing to work with us on this matter."

Calgary police began a major overhaul of street check procedures in October 2016.  Among the changes, a civilian unit independently scrutinizes each police stop to ensure they are lawful and unbiased.

Ganley noted that police forces in Alberta do not always use the term "street checks" in the same way, emphasizing guidelines would regulate "a non arrest, non-detention interaction between the police and a member of the public where they both ask for and receive personal information."

The new survey also asks how guidelines should address the reporting and public sharing of statistical street check data.

The consultation process is expected to last about six weeks. Provincial officials will use the survey to draft a guideline that will be sent back to groups for further consultation before implementation.