Premier Alison Redford, while justice minister, personally chose her ex-husband's law firm for a government tobacco-litigation contract worth potentially tens of millions of dollars in contingency fees, a CBC News investigation has found. 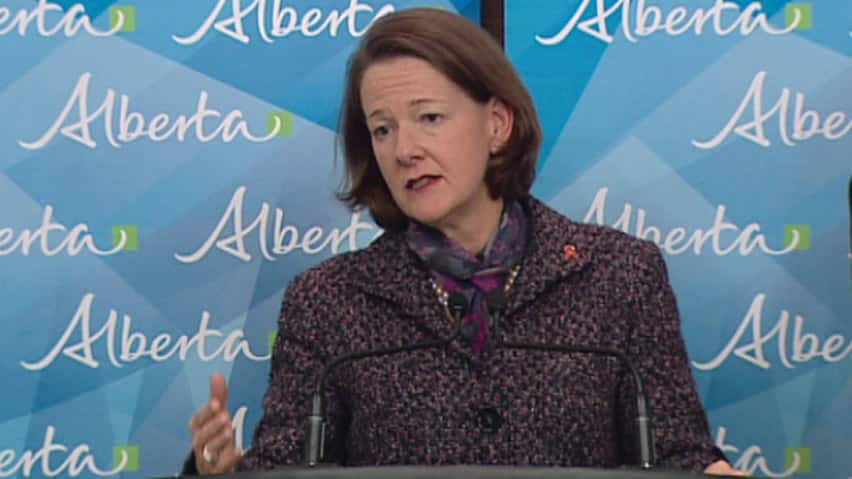 Premier Alison Redford, while justice minister, personally chose her ex-husband's law firm for a government tobacco-litigation contract worth potentially tens of millions of dollars in contingency fees, a CBC News investigation has found.

One of Canada’s top experts in conflict of interest says Redford was in a clear conflict and should have not made that decision.

"The minister of justice, as she then was, Alison Redford, in my view behaved unethically and possibly illegally by not recusing herself from making a decision in which she had a private interest, and was in a conflict of interest situation," said Prof. Arthur Schafer, director of the Centre for Professional and Applied Ethics at the University of Manitoba.

Redford did not respond to repeated interview requests over the past few days. Questions were instead directed to current Justice Minister Jonathan Denis. In an email, Denis’s executive assistant, Josh Stewart, said "there was no potential conflict of interest" for Redford.

"Ex-spouses are not included in the Conflict of Interest Act and Mr. Hawkes [Redford’s former husband] will not be working on this file."

Legal action worth $10B

As CBC News first revealed in May, the Redford government awarded the tobacco litigation contract — at $10 billion, the largest legal action in Alberta’s history — to International Tobacco Recovery Lawyers, a consortium of law firms from Florida, Ontario and Alberta.

The consortium includes the Calgary firms of Jensen Shawa Solomon Duguid Hawkes (JSS) and Cuming & Gillespie. The two firms have close personal and political ties to both Redford and the Progressive Conservative Party.

Redford’s former husband is Robert Hawkes, a partner in JSS, who served as her transition team leader after she won the Progressive Conservative Party leadership race in 2011 and ascended to the premier’s office.

Schafer said Redford clearly still shared a close personal relationship with her former husband at the time she made the decision to award the contract to his firm. As a lawyer and justice minister, Schafer said she should have recognized she had a conflict.

"It’s a shabby situation when the chief legal officer can’t recognize such a clear-cut conflict of interest," Schafer said in an interview with CBC News. "She is responsible for setting the ethical tone for her entire department, and indeed for her government.

"And for the person who is responsible for guaranteeing the integrity and the legal soundness of decisions … for her failing to recognize, or failing to act after recognizing she was in a conflict of interest is worse than shabby — it is shameful."

Through Freedom of Information, CBC News obtained documents that show Redford knew any of the three firms interviewed for the contract was capable of handling the litigation.

The three firms were:

The legal strategy of suing tobacco companies to recover at least some health-care costs associated with smoking began in the United States. The Florida firm that is part of ITRL has extensive experience in that area of law. Bennett Jones, headquartered in Calgary, is already suing tobacco companies on behalf of four provinces.

In a memo dated Dec. 14, 2010, Redford tells Justice Deputy Minister Ray Bodnarek: "I note that the review committee considers all three firms interviewed to be capable of conducting the litigation and believes that while no consortium stood above the others, all three have unique strengths and weaknesses.

The documents provide only a hint of what the potential conflict might be.

About a month before Redford’s Dec. 10 decision, a senior official writes in an email: "Are any of these firms on our page one list of retained firms involved in significant matters against the Crown? That list should be part of the last briefing we prepared on outside counsel for the Minister." There was a list, but it was blanked out in the documents released to CBC.

CBC spoke, on condition of anonymity, with a lawyer whose firm had sought the tobacco litigation contract. He learned from CBC that Redford had made the decision on the contract. But he said he had no concerns about the objectivity of the process.

In an email, the executive assistant to Denis, Josh Stewart, said: "The focus was on acquiring the requisite experience and avoiding competing interests that might conflict with Alberta’s litigation interests. Alberta was looking for an experienced law firm or consortium that would be focused on our lawsuit and the best litigation strategy based on Alberta’s interests."

Schafer found it "somewhat ironical" Redford considered the other firms to have perceived or actual conflicts, "given that her conflict was the most blatant of all.

"At the time she was making the decision, if the premier of the province or other minister were aware that she was allocating a contract to a firm in which her ex-husband was a member, they should have tapped her on the shoulder and said, ‘Alison, this is not a decision you should be making,’" Schafer said.

"‘It looks terrible, and it looks terrible because it is terrible. You can’t decide this impartially. The decision has to be made by someone who is not biased by a private interest.’"

The documents obtained by CBC News contain no mention of warnings from department officials about a conflict of interest. Schafer said senior justice officials should have recognized the conflict.

"If nobody warned her, then the failure was on her part as the minister and on their part as civil servants."

Wade lobbied the departments of Health and Justice — when Redford was justice minister — in relation to the Crown’s Right of Recovery Act, the legislation that provided the legal right to sue the tobacco companies.

Lobbyist registry documents show Wade was also lobbying on behalf of the other law firms associated with the consortium: JSS and Cuming & Gillespie.

According to Wade’s own declaration to the lobbyist registrar, he began lobbying on May 1, 2009. Hansard shows the first reading of the Crown’s Right of Recovery Act was 10 days later, on May 11, 2009.

"I find it very troubling that there was a lobbyist who registered to lobby on behalf of the consortium that won, before the decision to proceed with the lawsuit was even announced," Wildrose Leader Danielle Smith told CBC News in an interview.

CBC News searched public records of political contributions and found JSS, Cuming & Gillespie, and Tim Wade, the lobbyist, gave tens of thousands of dollars to the PC Party, to Redford’s riding, and to her leadership campaign before and after her December 2010 decision to award the tobacco litigation to the consortium.

She resigned from cabinet in February 2011 when she entered the Tory leadership race.

But Carsten Jensen, one of the lead JSS lawyers on the tobacco litigation file, donated more than $2,700 to provincial Liberal Party between 2004 and 2010.

James Cuming gave $875 to the PC Party and another Calgary Tory riding association. He gave nothing to Redford’s riding. But during her 2011 leadership campaign, his firm gave Redford $13,000.

Hawkes and Glenn Solomon have long, deep roots in both the federal and provincial PC parties.

The Wildrose leader told CBC News she will be filing a complaint with both the ethics commissioner and the lobbyist registrar.