Alberta Economic Development Minister Deron Bilous is apologizing for disparaging members of B.C.’s NDP government at a meeting of municipal politicians in Edmonton on Wednesday. He says he was frustrated over Trans Mountain pipeline delays.

An Alberta cabinet minister has apologized for referring to members of B.C.'s NDP government as "a bunch of shitheads" at a meeting of municipal politicians in Edmonton on Wednesday.

Economic Development Minister Deron Bilous said the salty language was a result of his passion and frustration over tactics the B.C. government has used to delay the start of Kinder Morgan Inc.'s Trans Mountain pipeline expansion to the West Coast.

"In my frustration, I had a poor choice of words and for that I do apologize," Bilous said. "But we will continue to stand up for this pipeline, for this project. And this is in the national interest." 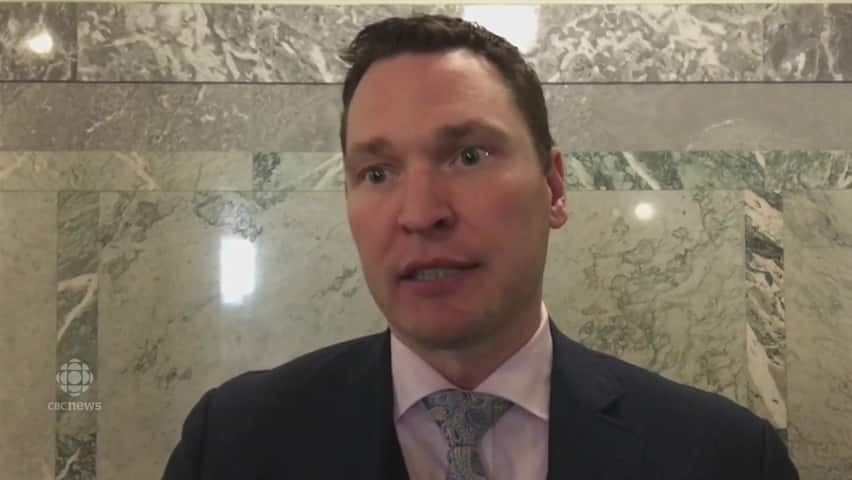 3 years ago
1:16
Minister of Economic Development and Trade, Deron Bilous, apologizes for referring to the B.C. government as 'a bunch of shitheads' at a meeting Wednesday. 1:16

Bilous made the remarks during the spring municipal leaders' caucus for the Alberta Urban Municipalities Association.

"Quite frankly, ideally, we need to be more collaborative with the provinces on either side of us, although B.C. is being a bunch of s--theads," Bilous said, according to a report in the Edmonton Journal. "But we're going to do what we can to get the pipeline built."

The report said members of the audience laughed and applauded loudly.

Bilous told CBC News he spoke to Premier Rachel Notley about his poor choice of words.

The existing Trans Mountain pipeline carries diluted bitumen and other products from Edmonton to Burnaby, B.C. The $7.4-billion expansion project would nearly triple its capacity to 890,000 barrels a day.

The project won federal government approval in 2016 but the B.C. government created uncertainty in January when it called for further review of the oil-spill risk.

In retaliation, Notley announced Alberta would boycott all B.C. wines. The boycott was later lifted after B.C. decided to refer the question of whether it can limit bitumen shipments to the courts.

Notley threatened last week to cut back shipments of oil if B.C. continued to throw up roadblocks to the project. The threat was a central piece of Thursday's throne speech, which kicked off the spring session of the Alberta legislature.

With files from the CBC's Justin Mcelroy