Brian Tischler plans to use his self-driving tractor for farming, but while testing it this winter he had another idea.

Brian Tischler plans to use his self-driving tractor for farming, but while testing it this winter he had another idea.

"A couple days ago I thought, 'Well, if the thing's driving around anyway, how about I just go ski behind it,' " said Tischler, who farms near Mannville, a village about 170 km east of Edmonton. 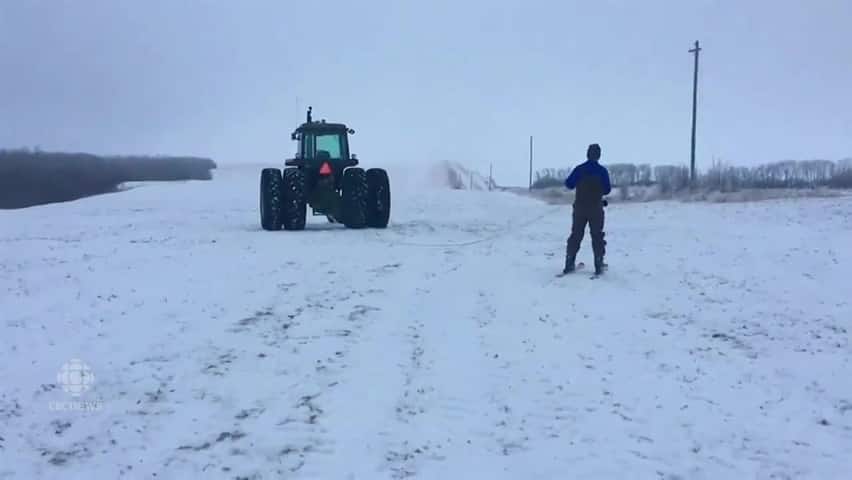 2 years ago
0:28
A new Canadian sport? Farmer Brian Tischler takes a ride behind his autonomous tractor. 0:28

He may not get far on his skis, but ultimately he's more interested in insuring the technology is available to other farmers.

This year, Tischler created AgOpenGPS, a software program for autonomous tractor driving, which he made available to download online for free.

"In agriculture, as in self-driving cars — or self-driving anything — the technology is there, but they're kind of like the unicorns," Tischler told CBC's Radio Active on Tuesday. "You don't actually ever see them."

Since he made the program available, he said, farmers from Europe, Africa and South America have downloaded the software, and the reaction has been positive.

"To them it's an absolute boon," he said.

For farmers, technology like this would otherwise cost more than $15,000 to buy, he said. With his software, users end up paying closer to $800 to build the necessary computer components.

'Sitting there doing nothing anyway'

He started farming in Mannville 20 years ago.

The seed for the autonomous vehicle idea came to him as he was driving his tractor this spring.

"I was riding my tractor, half asleep, and I thought, 'You know, I'm only one step away from being on an autonomous tractor. If I had a way for it to control the machine like the farmer does, and just to start and stop it.

"I programmed the autonomous software while I was sitting there doing nothing anyway, and then that's that."

His software allows a farmer to program auto-steering and speed control through an electronic board.

He hopes to improve the autonomous functions, so in the future it can better avoid obstacles in a field.

"It's very easy to get it going, it's a matter of how to turn, and when to stop," he said.

Tischler has been using AgOpenGPS to drive his seeding tractor and hopes it will be fully automated next year, so he can follow at the same time in another tractor to pack the soil.

Tischler said he made his software available online for free because he wanted to show people in agriculture that open source technology can help the industry develop.

"I really wanted to give back to agriculture," he said. "Not just in Canada, not just in the province, but worldwide."