United Conservative Party Leader Jason Kenney was targeted in Thursday night's leaders debate over his party's position on gay-straight alliances and allegations his team "cheated" to win the UCP leadership race in 2017.

United Conservative Party Leader Jason Kenney was targeted in Thursday night's leaders debate over his party's position on gay-straight alliances and allegations his team "cheated" to win the UCP leadership race in 2017.

Kenney, whose right-leaning party is currently ahead in the polls, focused most of his attacks on Alberta NDP Leader Rachel Notley, the current premier, particularly over her economic record and her "alliance" with Prime Minister Justin Trudeau.

Notley has framed her campaign around the question of who is the best and most trustworthy person to be premier.

She relished the opportunity to attack Kenney, who has faced controversy throughout the campaign about candidates revealed to have controversial views and questions about Kenney's role in the Jeff Callaway "kamikaze" UCP leadership campaign to discredit fellow candidate Brian Jean.

"It is becoming clearer and clearer that people on Mr. Kenney's leadership team, at the very least, cheated for him to win the leadership," Notley said during the debate.

"So the real question is this: If Mr. Kenney would cheat his own party members to have a chance at running to be premier, what will he do to the people of this province to keep the job?"

"Whenever she does this, it's because she's incapable of defending her failed economic record, the jobs crisis, her alliance with Justin Trudeau, her carbon tax," he said.

"Whenever you hear that fear and smear, that's what's really going on."

As for the allegations of cheating, Kenney said results of the UCP leadership vote were confirmed by an independent firm. He challenged Notley to reveal the names of the two NDP MLAs who were investigated for sexual misconduct.

"I'm really sorry that you believe that people talking about your record is somehow negative campaigning," Notley responded.

"The leadership campaign of what you were a part is under RCMP investigation."

Kenney was also forced to defend his party's position on gay-straight alliances.

Last week, he revealed a UCP government would roll back a bill passed by the NDP prohibiting parental notification if a child joins a GSA.

LGBTQ advocates, parents and teachers have condemned the move, saying it could out children to their parents before they are ready to disclose their sexual orientation or gender identity.

He told Kenney the homophobic views expressed by UCP candidate Mark Smith six years ago that came to light this week were "terrible."

"It seems time and time again people within your party are coming up with those things and they have to be disqualified," he said.

Kenney said the UCP supports GSAs and that notification of parents would happen in rare occasions where it was deemed critical for the child's well-being.

Kenney's campaign has focused on jobs, the economy and pipelines. He criticized Notley for complacency on pipelines and getting the government into billions of dollars of debt, a number projected to hit $96 billion by 2023.

"The only way to avoid digging into a  $100-billion debt hole that risks our future and our public services, without reducing spending on key public services, is to grow the economy," Kenney said.

"That is what this debate and this election is all about — getting people back to work."

Notley countered. She said Kenney's promise to cancel her deal to ship oil by rail and to provide a corporate tax cut would blow a massive hole in the budget.

Notley said that tax cut — which would drop the rate for large corporations from 12 to 8 per cent over four years — would come at the expense of spending on education and health care.

"I ask Albertans: Do you want to pay for a tax cut for your boss by freezing your kids' education and freezing your loved ones' health care?" Notley asked.

Liberal Leader David Khan and Mandel — each with single-digit support in the polls — went after each other in one of the most memorable exchanges of the night.

When Khan said he had heard Alberta Party candidate Greg Clark say it on a radio station, Mandel asked Khan what he was smoking at the time.

"Maybe you were smoking things that you shouldn't have been smoking," Mandel quipped. 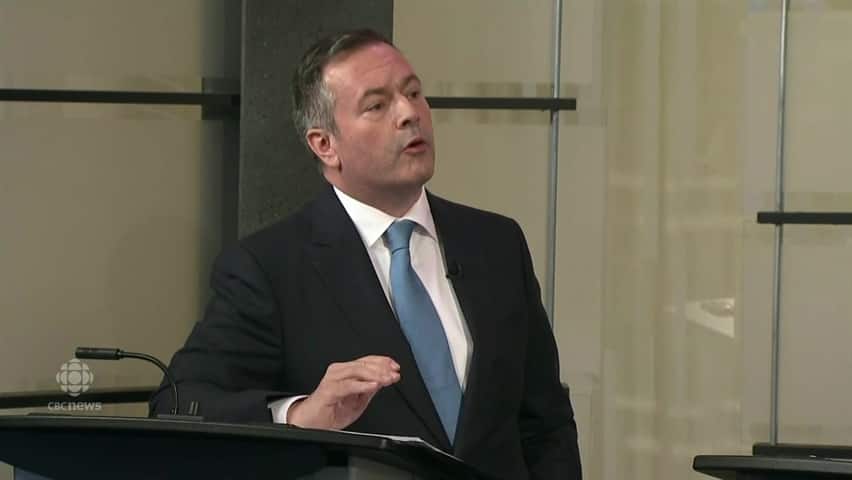 2 years ago
0:42
Jason Kenney, Rachel Notley, Stephen Mandel and David Khan each took shots at each other Thursday night, sometimes using key time they otherwise could have spend expanding on their own platforms. 0:42

The four leaders faced eight questions on economic and social issues from a panel of journalists.

The debate was frequently marred by crosstalk as Notley and Kenney jabbed at each other, meaning Mandel and Khan struggled to make ground.

Albertans go to the polls on April 16.

Debates can sometimes be landmark moments in election campaigns.

Notley's performance in the televised debate on April 23, 2015, appeared to turn the polls in her favour.

A Mainstreet Research poll released that day showed Notley's NDP with 31 per cent of support, one point behind the Wildrose Party led by Brian Jean, and five points ahead of Jim Prentice's Progressive Conservatives.

The first poll released after the debate showed the NDP at 38 per cent, up seven points, while the Wildrose had dropped 11 points and the Tories two points. From then on, the NDP consistently led in every poll until the May election.

After that debate, Prentice was accused of sexism and "mansplaining" for telling Notley, "I know that math is difficult," while discussing the NDP's proposal to raise the corporate tax from 10 to 12 per cent.

On May 5, Albertans elected an NDP majority government, ending the PCs' 44-year hold on power.