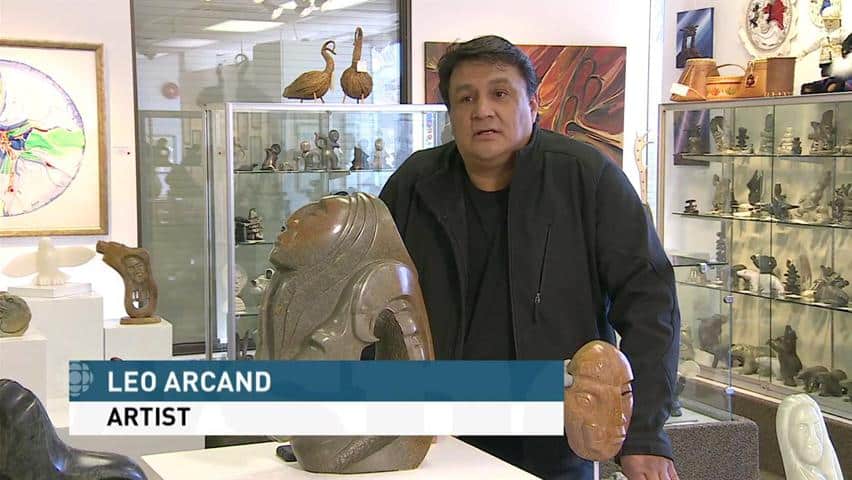 On Friday, kneeling at the foot of a display featuring five of his soapstone sculptures, is none other than the artist himself — Leo Arcand, a sculptor from Alexander First Nation.

"It has the same motif as the one that Trudeau gave to Obama," notes the customer he's chatting with.

In fact, tiny blue dots can now be spotted on many of the Arcand's sculptures in the gallery.

"Yeah, I've gotta get back," Arcand says, with a laugh. "I don't know if I'm going to have enough stone."

'It has been absolutely crazy here'

Bearclaw Gallery has had its fair share of recognition during its 40 years in Edmonton. But nothing like this.

During a 24-hour period, all of Arcand's smaller sculptures have been sold — a total of about 15 pieces.

"It has been absolutely crazy here," said Bearclaw Gallery owner Jackie Bugera, who is trying to keep up with the flood of emails and phone calls from interested buyers.

"It's been beyond your wildest dreams in terms of exposure across Canada, and well wishes from so many people and congratulations," Bugera said.

It all began 25 years ago with an attempt to carve some deer antlers. Inspired by a CBC documentary, Arcand found some shedded antlers in his dad's yard and gave it a go.

You never really know the outcome of what a piece is going to look like until you have the finished product.- Leo Arcand, sculptor

Coincidentally, his cousin called and asked if he wanted to try carving soapstone. Arcand soon found himself on his St. Albert apartment balcony with a big hunk of stone and tools he didn't know how to use.

He was only interrupted when his wife went into labour and they rushed off to hospital.

Two great events in one day

Later that day, on March 1, his daughter, Julia Cardinal, was born.

"So that, to me, was a blessing to have those two events happening and not knowing it was going to be part of my future," Arcand says.

It's a story Cardinal hears every year on her birthday.

"It just kind of brings joy to me, knowing that he started (carving) right on my birthday," she said shortly after hearing the news about her dad's art ending up in U.S. president's hands.

"I'm kind of emotional because he's been doing this for years, and I think he really deserves it," Cardinal said, adding she's "very proud" of her dad.

As his daughter grew, so did his relationship with the stone.

"The stone is waiting there for millions of years, waiting for somebody to discover it," Arcand said. "And it happened to be me ... so we get to have that relationship."

But it can wait even longer, sitting in the corner of Arcand's studio for a year or more until suddenly, "today's the day."

Carving soapstone can be like butting heads, Arcand said with a smile. The stone will let him know if he's forcing it to transition from raw piece to initial shape. There are steps to creating the art, he said.

"You never really know the outcome of what a piece is going to look like until you have the finished product," he said.

"He is exceptional, he is a master at what he does," Bugera said. "The works flow and they're gentle and they're graceful, but there's this element of emotion that he captures so well, which is incredible in a three-dimensional medium."

One of those works, Courage, is now settling into its new home at the White House.

Arcand said he finds it fitting that the B.C. soapstone took the shape of a woman's face embodied in an eagle — a symbol of the United States.

"My message in that piece was for love, courage, hope, honesty, working together," Arcand said. "To bring a relationship with mother earth and humankind closer together.

"I'm truly honoured that it's going to a beautiful home," said Arcand, who is excited to get back to his Slave Lake studio.