Alberta could run out of COVID-19 vaccine by next week, premier says

Alberta is running out of COVID-19 vaccinations and could exhaust its supply as early as next week, Premier Jason Kenney says.

Province could be short at least 20,000 doses within a few days, Jason Kenney says

Alberta is running out of COVID-19 vaccinations and could exhaust its supply as early as next week, Premier Jason Kenney says.

The province announced Monday it will immediately expand its vaccination program to include all paramedics and emergency medical responders, but Kenney said supplies are already precarious.

The province will soon be administering more doses than it is receiving unless it gets what Kenney called "a huge surprise shipment."

By next week the province is projecting to be short at least 20,000 doses, he said, and that number could be significantly higher based on the pace of inoculations.

"All I see is red on our projections from the week of Jan. 18 to the week of March 29," Kenney said Monday at a news conference. "The red represents a shortage of supply. So it is very significant.

"And I want to be clear, this is not a blame game. But we're just saying that Alberta's health system has stepped up in a big way here. And we need more doses, bottom line. It's very simple."​

Kenney said the federal government has told Alberta it can expect to have received 677,000 doses of the Pfizer-BioNTech and Moderna vaccines by the end of  March.

"But as I've pointed out," he said, "our capacity [to administer vaccines] by that point, at the end of March, will far, far outstrip the incoming supply." 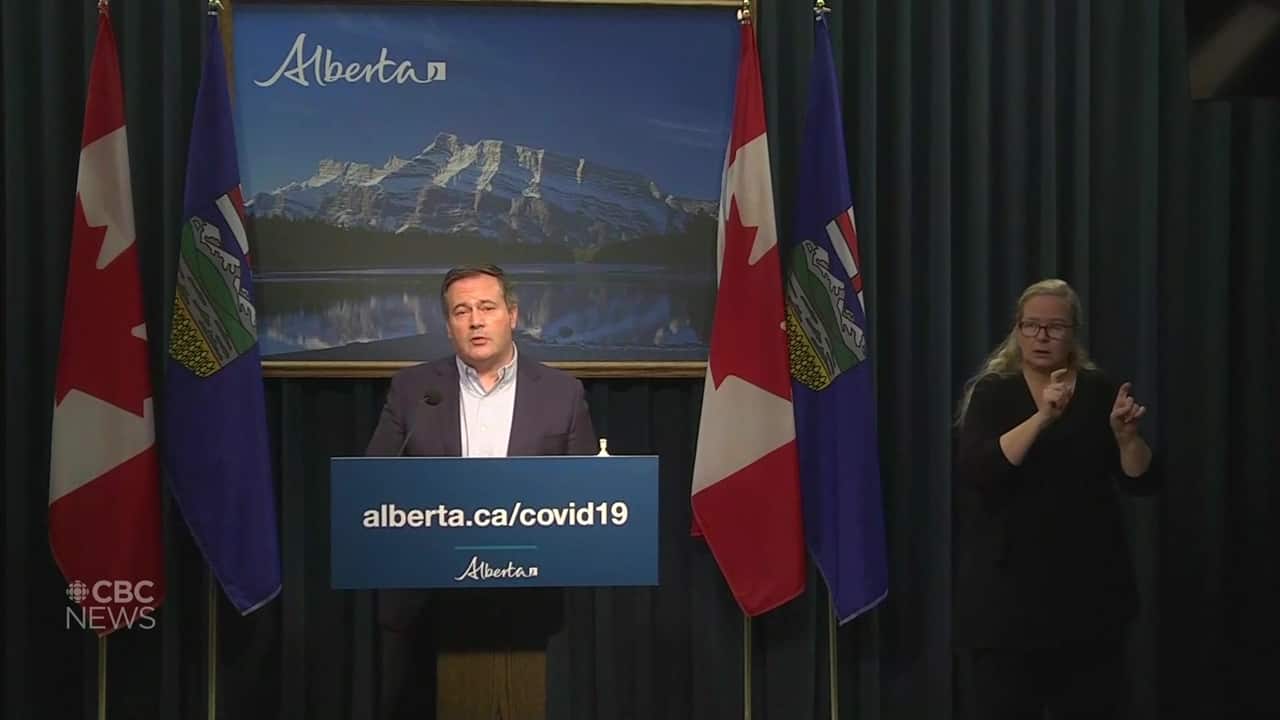 Kenney said by expanding vaccinations to include paramedics and emergency medical technicians, and last week's move to add staff in COVID-19 units and medical surgical units, the province is well on its way to get immunizing its most vulnerable populations.

All provinces have to depend on the federal government to quickly procure and distribute more vaccine he said.

"The bottom line is this," he said. "Alberta's capacity to give people the jab will soon outstrip available vaccine supplies and we are doing everything humanly possible to roll out these life-saving vaccines as quickly as they arrive."

As of Sunday a total of 46,791 doses of vaccine had been administered across the province.

Alberta reported 639 new cases on Monday and 23 more deaths. Across the province there were 13,917 active cases, with 811 people are being treated in hospitals for the illness, including 130 in ICU beds.

The R value is essentially the average number of people each infected person passes the disease on to.

Paramedics and EMTs are health-care workers on the front lines of the province's battle against the disease, Health Minister Tyler Shandro said.

"They are a vital component of our COVID response, and I know that all paramedics are working day-in and day-out to keep Albertans safe," he said. "I'm proud of Alberta's EMS and para-medicine system, and I'm so grateful for the work that you and all health-care workers have provided throughout the pandemic to us as Albertans."

One challenge for the province is trying to determine when enough people will have been vaccinated to lift all of the public health measures, said Dr. Deena Hinshaw, the province's chief medical officer of health.

More research is needed to determine whether the vaccines not only protect people but prevent asymptomatic people from spreading the coronavirus, she said.

"We know from some of the studies that have been done looking at how fast the virus spreads, that there's an estimated roughly 70 per cent of the population that needs to be immune before we would have what's called herd immunity," she said.

"But what we don't know for sure is, for example, some of the new variants that are being detected that have an increased infectivity, whether that changes the proportion of the population.

Hinshaw said she expects that between the vaccine coverage Alberta will have by the end of March and the ability to move some activities outdoors, the province will likely be able to start easing some restrictions.

"But for the moment, we have each other as our vaccine, and that is not going to change, again, until we see a larger proportion of the population able to access vaccines."