Alberta set another sorrowful single-day record on Tuesday when the province reported 38 more deaths from COVID-19.

Alberta set another sorrowful single-day record on Tuesday when the province reported 38 more deaths from COVID-19.

Deaths from the illness are reported as Alberta Health compiles data, meaning not all 38 happened on the same day.

The latest report includes deaths reported to the province from Dec. 30 to Jan. 12.

But provincial numbers released over the last two days show that at least 21 people died from COVID-19 on Sunday alone.

The total number of deaths since the pandemic began in March now stands at 1,345.

"Today is a difficult day where we announced the highest number of deaths reported in a single day, well over 30," Dr. Deena Hinshaw, the province's chief medical officer of health, said Tuesday at a news conference. "And it's exactly for that reason that we want to make sure that every Albertan who is at risk gets the vaccine as soon as possible."

The previous record for the most deaths reported in a single day was 31. That record was set on Saturday.

By end of day Monday, a total of 52,318 vaccine doses had been administered in the province.

Hinshaw said Alberta Health is extending the interval between first and second doses from three or four weeks, as it had been doing, to as many as 42 days so as many Albertans as possible get the protection of those first doses.

Studies done on Pfizer-BioNTech and Moderna vaccines estimate the effectiveness of that first single dose, measured at the time when the second dose was administered, is approximately 90 per cent, she said.

"What we don't know is how long that single dose protection will last without the second dose," Hinshaw said. 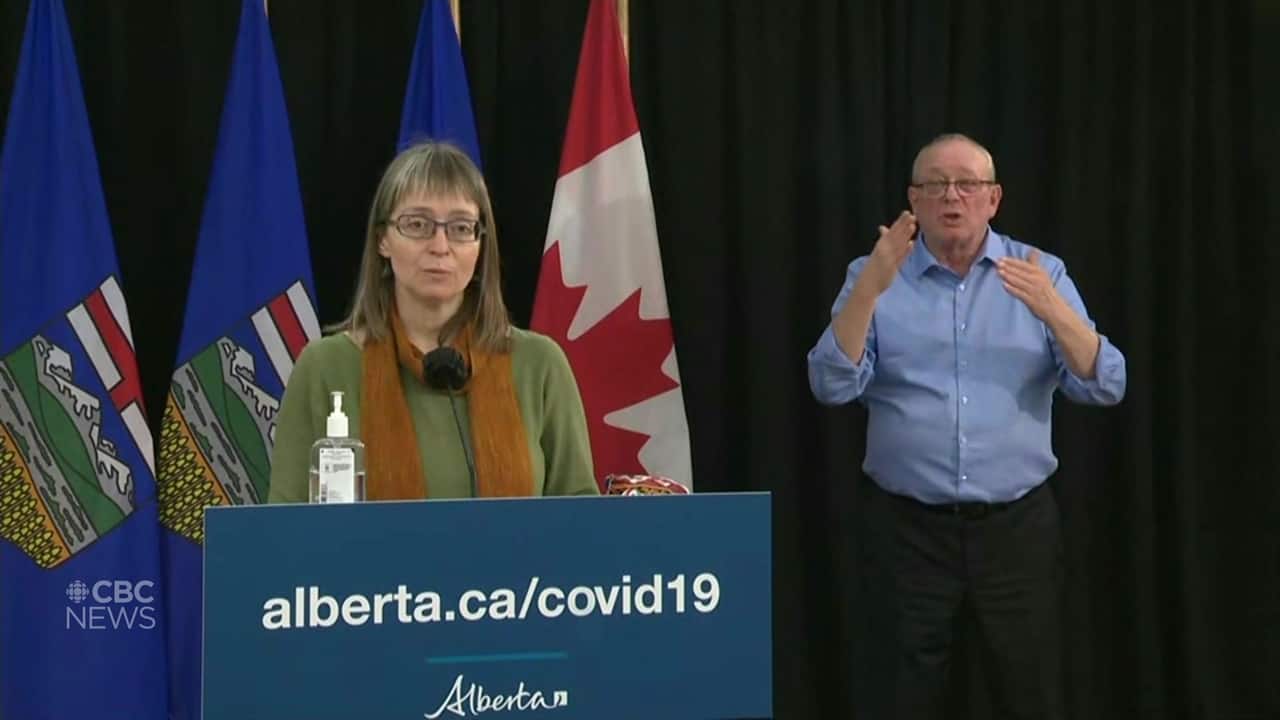 In the studies, there were a range of intervals between the first and second doses, she said, and some people had a 42-day interval between doses.

Both the World Health Organization and the National Advisory Committee on Immunization in Canada have said the 42-day interval could be considered when vaccine supply is short, Hinshaw said.

The ability to offer the vaccine to more people had to be weighed against the need to provide second doses, she said.

"If we were to save half of every vaccine shipment for those who need a second dose, we would be dramatically reducing the total number of Albertans who could benefit from the early protection.

"None of these are easy decisions, but it's really important that as we're considering all of these options, we make sure that we're thinking about the benefits and risks at individual levels as well as the population level.

Everyone who is eligible for the vaccine will go through an informed consent process, she said, and can choose to accept the vaccine or not.

"Any appointments that were previously made will be honoured, and all residents of long-term care and designated supportive living facilities will still receive their second dose at the three-to-four-week interval to ensure that those at the absolute highest risk get that second dose in that shorter window."

Alberta reported 652 new cases of the illness on Tuesday.

The number of active cases of COVID-19 in Alberta has slowly declined over the past four weeks.

But hospitalization numbers are higher now than they were a month ago.

The regional breakdown of active cases reported on Tuesday was:

The death toll so far has reached 1,345. The age breakdown for that total is: