'We have reached a precarious point': Alberta now has 13,166 active cases of COVID-19

For Albertans fearful about the raging COVID-19 pandemic, the big numbers just keep piling up. On Monday the province reported 1,549 new cases and a total of 13,166 active cases.

For Albertans fearful about the raging COVID-19 pandemic, the big numbers just keep piling up — on Monday the province reported 1,549 new cases and a total of 13,166 active cases.

At her news conference, Dr. Deena Hinshaw said the province has reached "a precarious point" where the virus is spreading faster and more widely than at any other previous point in the past nine months.

"Today I will meet with the priorities implementation committee of cabinet to discuss a series of new measures to reduce the rising spread of COVID-19," Alberta's chief medical officer of health told the media just after 2 p.m. "Based on their decisions, we will provide a detailed update to Albertans tomorrow."

Hinshaw kicked off her news conference with a stark reminder about what is at stake.

"To put it as plainly as possible, this is like a snowball rolling down a hill growing bigger and faster, and it will continue unless we implement strong measures to stop it," she said.

"We must take action. Waiting any longer will impact our ability to care for Albertans in the weeks and months ahead. As chief medical officer of health, my role is to provide advice to government on how to protect the health of Albertans."

On Monday, 328 people were being treated for COVID-19 in Alberta hospitals, including 62 in ICU beds. Another five deaths were reported, bringing the total of 476.

Hinshaw had more bad news. She said the province's contact-tracing system has been unable to keep up with demand, given the significant increase in new cases over the past several weeks.

Despite Alberta Health Services' efforts to recruit and train new contact tracers the team has not been able to keep up, she said.

"This means that there has been a slowly growing backlog of cases over the past several weeks who have not yet had a call from AHS to do the case investigation, Hinshaw said.

"To be clear, these have all received notification of their positive result. It is simply the investigation they have not had the opportunity to complete," she said.

"We are left with an incredibly difficult problem to solve. In order to maximize the effectiveness of the team, I have asked AHS to start with the most recently diagnosed cases and work backwards, trying to reach as many cases as possible, but prioritizing the cases which will have the greatest benefit in reducing further transmission."

WATCH| Dr. Hinshaw says COVID-19 cases in Alberta are like a snowball 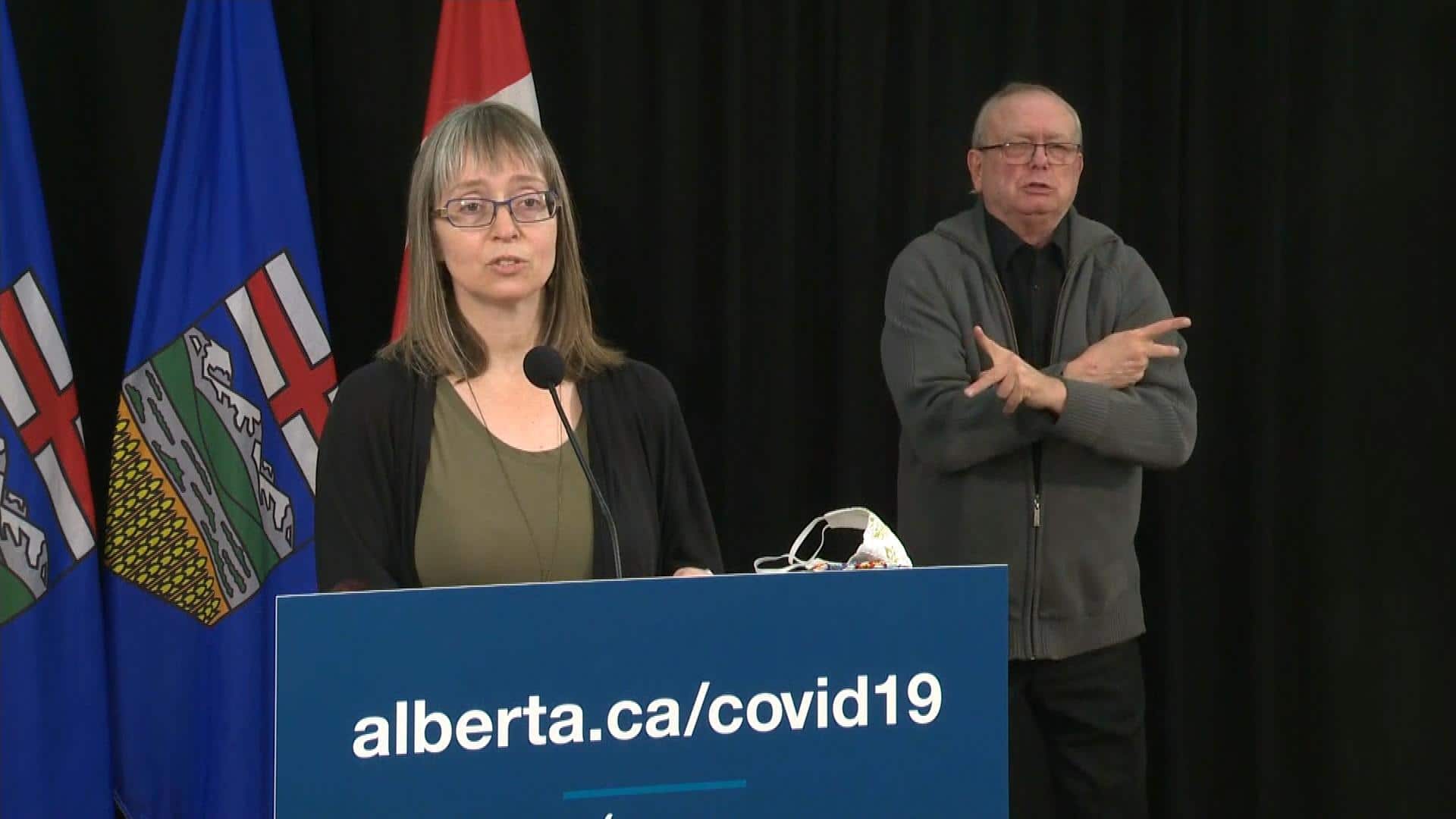 As a temporary measure, starting on Tuesday, if 10 days have passed since someone received a positive COVID-19 test result, AHS will no longer call that person to conduct a case investigation or contact tracing, she said. Those people will instead receive text messages notifying them to not expect calls, and to provide guidance on if or when their isolation period has ended.

"I am sorry that this change will leave a group of people without the opportunity to have a conversation with AHS to understand where they acquired the infection and how to better prevent onward spread," Hinshaw said. "But we must focus on looking forward and using our contact tracers where they have the greatest impact."

It's a further deterioration of contact tracing in the province. Earlier this month, contact tracers stopped notifying anyone who was in close contact with an infected person, unless that contact occurred in a hospital, school or continuing care home.

Some school cases to go untracked

Due to the current backlog, AHS may not be able to track and record every case linked to a school in the last two weeks, she said.

In-school transmission has happened 182 times, so far, with 99 of those having only one new case as a result, Hinshaw said.

"I am confident that because of the diligence of our schools, parents, guardians and students, the number of cases in schools will remain stable, and we will continue to see a limited number of transmission events in schools. The best thing we can do to protect schools is to lower community transmission.

Cases among health-care workers and those who work in continuing care are flagged through a separate mechanism, she said, and should not be part of the backlog.

With 13,166 cases, Alberta now has more active COVID-19 cases than any other province or territory in Canada.

Here's the regional breakdown of active cases reported on Monday.

With COVID-19 cases setting new records on a daily basis, the Alberta Opposition is demanding the provincial government bring in mandatory measures to slow the spread of the virus.

The five people whose deaths were reported on Monday were:

"We are definitely in a crisis situation," Alberta NDP Leader Rachel Notley told CBC Radio's Edmonton AM on Monday. "I think we've lost control of the virus.

"What we do need is for the government to step up and to engage with Albertans. And we haven't seen that."

Notably, the number of new cases on Sunday was higher than those announced in Quebec and Ontario, which have populations two and 3.5 times larger than Alberta.

As of the Sunday update, Alberta had 12,195 active cases. There were 319 people in hospital, including 60 in intensive-care beds.

But Notley said there needs to be more than talk.

"We need to be taking pretty stringent steps at this point, now, to bend the curve. We need to be looking at targeted lockdowns and targeted restrictions in order to reduce the rate at which the virus spreads," she said.

She couldn't be more specific about the types of measures, noting that would require access to data about the spread of the coronavirus.

Only province without mask law

That said, mandatory masks and limitations on places where people congregate would be obvious starting points, Notley told CBC.

"For heaven's sakes, we're the only province in the country that doesn't have a mandatory mask bylaw. We have members of the UCP caucus literally saying, claiming, that masks increase the spread of the virus. I mean, they're on a completely different planet," she said.

In Alberta, mask bylaws are the decision of municipal governments. Both Calgary and Edmonton have had mask bylaws in place since Aug. 1.

Edmonton's bylaw was extended last week so that it will remain in effect until December 2021.

Notley noted that any lockdowns would have a serious impact on businesses, especially smaller ones, and said it is important to bring in measures to ensure their economic health.

"Unfortunately, our premier and his caucus have been framing this decision-making process through the lens of saying you either protect the economy or you protect health," she said.

"Now we're in the situation where Alberta is by far and away the worst province in the country and the numbers are growing so quickly that we're going to have to make greater sacrifices in order to get the crisis under control."

"I think this council is very, very committed to trying to support the right public health measures," he said. "We've also been consistent that we would prefer the province to take those steps, because they have the clearest mandate, the sharpest tools, the ability to do it in a regional catchment that's borderless, just like the virus. And also because they have better data than we have access to."

"The numbers are extremely concerning, but they're also exactly what the epidemiologists who've been commenting have been saying for more than a week now. In terms of what the city can do, I'm loathe to act unilaterally because the virus is borderless."

Iveson said he has spoken with several mayors around the region about the possibility of a co-ordinated response.

"It sounds like the province is going to take some further steps today or tomorrow," he said. "We'll look forward to see what those are. But we are looking at simultaneous regional emergency advisory committee meetings later this week, if necessary, should it fall on municipalities, as it did with the mask bylaw, to take decisive and hopefully co-ordinated action."

Hinshaw also issued a plea for help from the public on Monday.

"We all need to reduce our social and cohort interactions as much as possible," she said. "If you can adapt your life to reduce the amount of time that you spend interacting with others, please do so now.

"This is a challenging moment but our province is strong and there is hope. We are seeing extremely promising news around vaccines and treatments, which may start being available sometime in the new year. There is light at the end of the tunnel, but we cannot give up now."