Alberta has now lost 1,500 people to COVID-19 since pandemic began

Active cases in the province peaked on Dec. 13 and have steadily declined since

Alberta has now lost 1,500 people to COVID-19 since the pandemic began last March.

On Thursday, the province reported 16 more deaths and 678 new cases of the illness.

Active cases in Alberta have been declining steadily for the past month and are now half what they were in mid-December.

But though the number of people in hospital has declined slightly, that metric has lagged well behind.

Hospitalizations in Alberta peaked on Dec. 30, when there were 941 people being treated for the illness, including 145 in ICU beds.

Across the province, 726 people are now being treated in hospitals for the disease, including 119 in ICU beds.

"In a year that has already been extremely difficult, I am proud of the sacrifices and community spirit that Albertans have shown to produce these encouraging numbers," Hinshaw said Thursday at a news conference. "At the same time, we are not in the clear just yet. That is why no additional measures are being eased at this time." 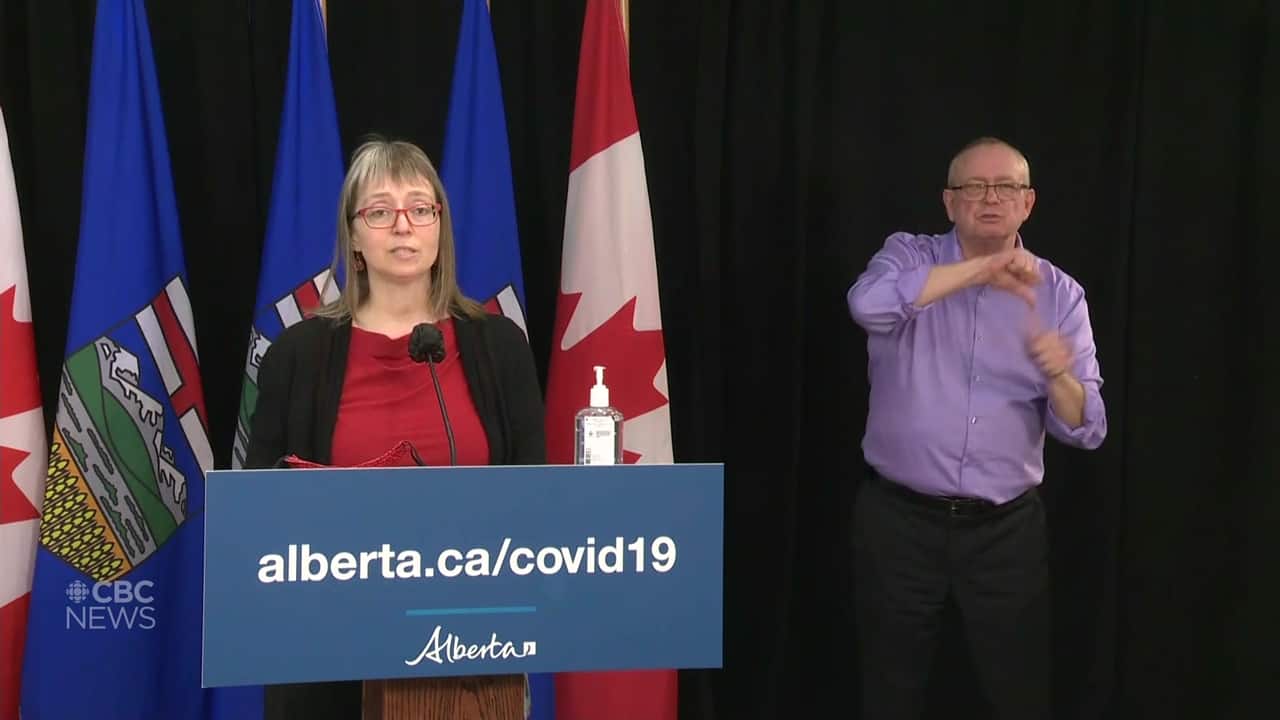 'We are not in the clear just yet,' Dr. Hinshaw says

1 month ago
2:57
Although Alberta is seeing COVID-19 numbers drop, Dr. Deena Hinshaw says it's too early to lift health restrictions as hospitalization and ICU numbers are still high. 2:57

While cases are falling, Alberta still has the second-highest active case rate per capita in Canada, she said.

"While our hospitalization numbers have decreased significantly from the peak, they remain high," Hinshaw said. "To put this in perspective, despite the progress we've made, there are just as many COVID patients in hospital today as there were on Dec. 8, the day that our current restrictions were first announced."

The health system is still under significant strain, she said, and the province has to do what it can to ease that burden as quickly as possible.

"We need to continue driving community transmission down. That is why it is essential that we keep the current measures in place for a little while longer, and why we all need to make good choices and to rigorously follow all the orders in place."

Any decision to ease or lift restrictions would have to take into account new cases, the positivity rate (which was 4.8 per cent on Thursday), the R-value and hospitalization and ICU numbers, Hinshaw said.

"The team that I work with, we look at those numbers on a daily basis, and we do have regular discussions with elected officials about the meaning of those numbers and about that planning and what our recommendations are about what we might be able to move forward to."

The regional breakdown of active cases reported on Thursday was: