One more death, 98 new cases of COVID-19 in Alberta

One more person has died of COVID-19 in Alberta and 98 new cases of the illness have been reported. 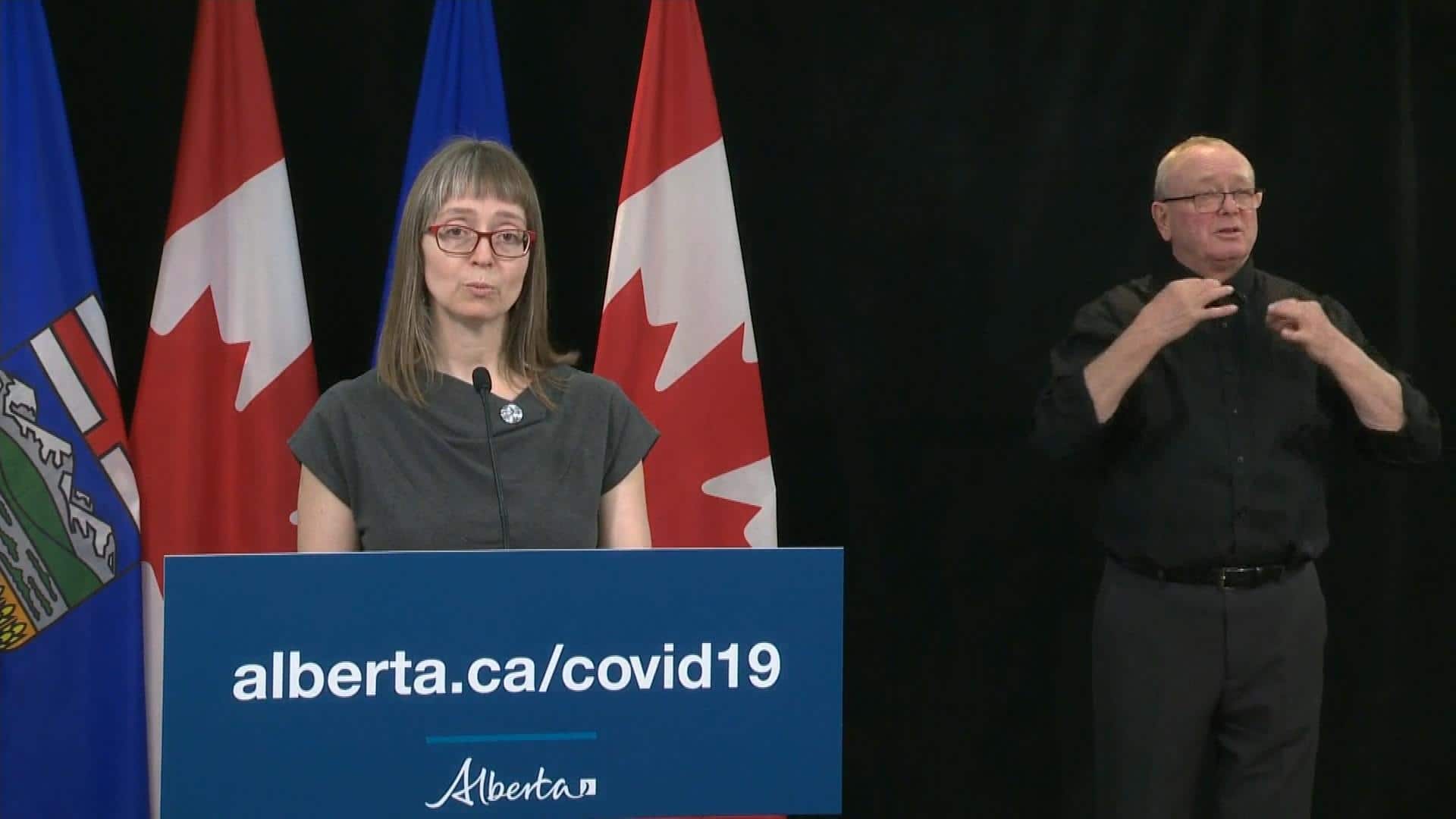 Masks may help stop the spread of COVID-19

11 months ago
2:07
Dr. Deena Hinshaw, Alberta's chief medical officer of health, explains the benefits of wearing a non-medical masks during the COVID-19 pandemic. 2:07

One more person has died of COVID-19 in Alberta and 98 new cases of the illness have been reported.

A woman in her 80s who lived at the McKenzie Towne care home in Calgary succumbed to the virus, bringing the number of residents of the home who have died to 11.

As of Monday, 40 people were in hospital with the respiratory illness, including 16 patients in intensive-care beds.

At the news conference Monday Premier Jason Kenney said the province is doing what it can to obtain more masks for medical staff and the public.

Alberta currently has a one-month supply of N95 masks and is trying to procure more, Kenney said. The province has an adequate supply of "procedural masks" used in most medical settings, he said.

Kenney noted that jurisdictions which have been successful in limiting the spread of the coronavirus, such as Taiwan, Hong Kong, South Korea and Singapore, have all seen "quite widespread, popular use of face masks, particularly in crowded environments" as part of their overall control efforts.

"To assist with that, I am pleased to announce that the government of Alberta is undertaking a mass procurement of non-medical masks for future use by the general public," he said. "The health and safety of Albertans is paramount and we want to take every opportunity to protect our citizens."

Kenney said he will make a televised address to the province on Tuesday evening to give more details about the province's battle to slow the spread of the virus, and to provide more modelling projections to show people what the situation might look like over the coming weeks.

With the weather warming up and a long weekend coming, Kenney said the province is concerned large numbers of people who have been trapped at home may want to get outside. He cautioned against that.

The peak of the provincial outbreak is likely still weeks away, Kenney said.

"How high that peak goes then depends on how people conduct themselves now," he said.

"Our Canadian special advisory committee has been looking closely at the evidence around this and yesterday we determined that we need to expand our approach to take this emerging evidence into account in our measures.

"One of the major implications for this is the wearing of face masks by those who are feeling well. We discussed this on Friday after the [Centre for Disease Control] in the United States enhanced their recommendations, and I have been getting a lot of questions around the effectiveness of face masks for the general public.

"What we know is that people who are sick spread illness," Hinshaw said.

"We also know that even with more asymptomatic transmission happening than we previously thought, all of the recommendations we have made — about keeping two metres distant from others, having close contacts of travellers or returning travellers stay home for two weeks from their last exposure — those recommendations are more important than ever.

"In addition to, not in place of, following all of that advice, there may be added benefit for those who are well, and in places where they cannot keep two metres distant from others, to wear a face covering.

"Wearing a non-medical mask, such as a homemade cloth mask, has not been proven to protect the person who is wearing it. However, it may be helpful in protecting others around you. This is because face coverings are another way to cover your mouth and nose, to prevent respiratory droplets from contaminating other people or surfaces.

"Additionally, wearing a mask may stop you from touching your nose or mouth."

Hinshaw offered guidelines for people who choose to wear non-medical masks or face coverings, saying first the mask must be well-fitted and not gape at the sides.

If you wear a mask, you must wash your hands before putting it on, she said, as well as before and after taking it off.

Cloth masks should be worn only a short time, as there is some evidence that they can trap virus particles after they become damp, which may put the wearer at greater risk of being infected.

For those choosing to wear non-medical masks, Hinshaw said it may be prudent to carry a bag with several clean masks in it, and a plastic bag that can be used to safely store used masks until they can be washed at home.

It is critical that used masks be carefully handled to avoid spreading infection to others, Hinshaw said.

The province announced it is changing some of its testing priorities.

Alberta is second only to Australia in its per capita rate of testing for the coronavirus, Hinshaw said at the news conference.

Testing priorities are intended to allow health-care workers to diagnose people with the illness, trace the spread among those at greatest risk and determine if the steps taken so far are working or whether more measures may be needed, she said.

The priority list for testing has been expanded from health-care to now include those who work in group home or shelters, first responders and correctional staff.

Those eligible for testing will now include anyone over 65 who has symptoms, including fever, runny nose and cough.

The regional breakdown of cases is:

So far 361 people in Alberta have recovered from the illness.

The province also said it is changing labour laws so employers can more easily respond to public health measures and allow employees to remain attached to jobs and access federal assistance programs.