Alberta will have to bring in additional restrictions if it hopes to slow the spread of COVID-19, which has now topped 20,000 active cases, says the province's top public health doctor.

Death toll in Alberta hits 631, with more than 600 people being treated in hospitals

Alberta will have to bring in additional restrictions if it hopes to slow the spread of COVID-19, which has now topped 20,000 active cases, says the province's top public health doctor.

The latest measures brought in have put the province in a better position than if those restrictions not been introduced, Dr. Deena Hinshaw, the province's chief medical officer of health, said Monday at a news conference.

But those measures are not bending the curve enough, Hinshaw said.

"I think that the current measures that we have in place are not likely to be sufficient to bring down our numbers," she said. "So if the goal is to bring our numbers down, we will need additional measures to be able to do that.

"The exact restrictions that are needed — that's where that question lies. But I do believe we do need additional restrictions in order to bring our case numbers down and protect our health-care system."

Hinshaw said her team will make recommendations to Premier Jason Kenney and his cabinet in coming days.

The province hit another grim milestone on Monday with 20,067 active cases COVID-19, and reported 16 more deaths, including four on the same day in the same Edmonton care centre. That brings the death toll to 631 since the pandemic began in March.

Across the province a total of 609 people were being treated in hospitals for the illness, including 108 in ICU beds. 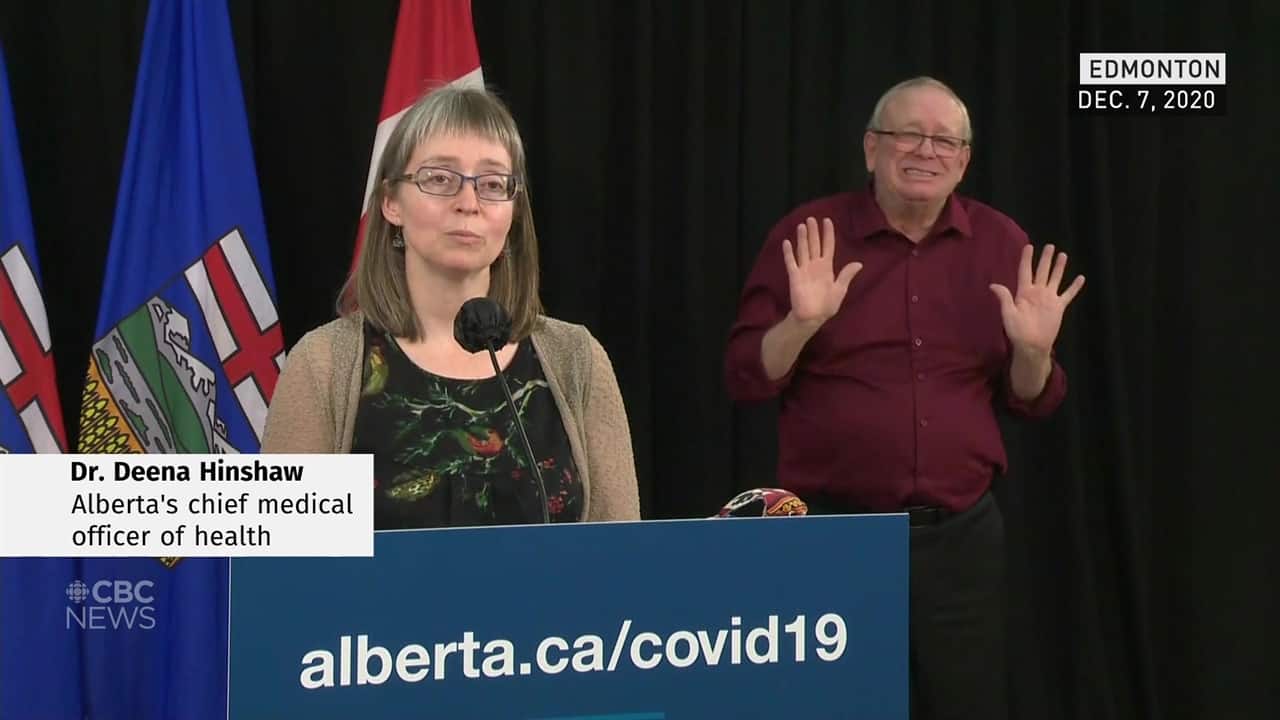 1 month agoVideo
0:54
Dr. Deena Hinshaw, Alberta's chief medical officer of health, said she is more concerned than ever about the spread of COVID-19. She also the province's current restrictions aren't enough to bend the curve. 0:54

The province reported 1,735 new cases, down more than 100 from the day before.

The regional breakdown of active cases on Monday was:

"The rising fatalities that we are reporting is a tragic reminder of the deadly power of this virus and why it is vital that we slow the spread," Hinshaw said. "Sadly, six of the deaths we are reporting today are linked to the outbreak at the Edmonton Chinatown Care Centre."

Four people died at that care centre on Friday alone.

"We are very concerned by the number of cases and the overall situation at the facility," Hinshaw said. "Alberta Health Services has provided staff to help support residents and ensure they are getting the care they need.

"Alberta Health is also helping monitor the facility. Staff visited the site three times last week and again today. This is a challenging situation but we are working hard to protect everyone involved."

Alberta rolled out its latest restrictions on Nov. 24, prohibiting all social gatherings in people's homes and making masks mandatory for all indoor workplaces in Edmonton and Calgary.

Premier Jason Kenney that day declared a second state of public health emergency and called the restrictions "bold and targeted" and warned that more severe restrictions would be introduced if the spread of the virus did not slow.

The most recent deaths reported by the province were:

Hinshaw said the Central zone has seen the highest acceleration in case rates over the past couple of weeks, but the majority of cases by far are still in Edmonton and Calgary.

Determining the kinds of restrictions that will help bend the curve requires a lot of discussion, she said.

"But what I can tell you, and what is absolutely clear, is that COVID is not sparing parts of the province. And so the measures that are currently in place that are provincewide really do need to be respected and followed everywhere in the province."