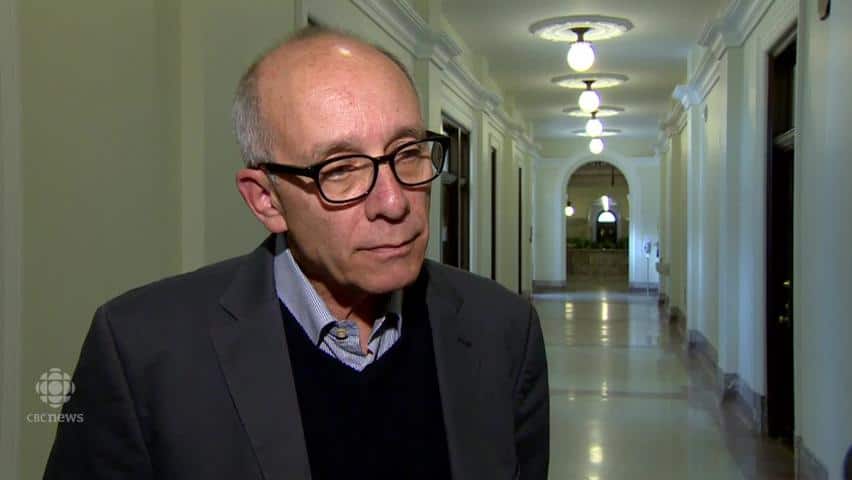 6 years ago
2:12
The new health minister plans to take action on long-term care 2:12

Saher said the situation has improved since 2005, the last time his predecessor Fred Dunn reviewed the system, but more needs to be done.

Although there are care plans for all 14,000 Albertans in long-term care, Saher found there isn't any follow-up to ensure those plans are being followed.  He said that visits to facilities are announced by Alberta Health Services at least eight weeks in advance and that needs to change.

Health Minister Stephen Mandel said he has accepted all of Saher's recommendations and will improve monitoring, including implementing drop-in visits without prior notice.

“The department is taking it seriously," he told CBC News in an interview. "I take it very seriously and we will put into place a monitoring system that’s going to work for residents as well as for the public.”

Mandel said that long-term care is at the top of his priority list. He said a number of intitiatives will be announced next week to improve bed access and take pressure off emergency rooms, which are facing waits for beds because seniors cannot be moved into long-term care.

Although Saher found the situation has improved over the last decade, opposition parties disagreed.

Liberal Leader Raj Sherman believes the auditor general needs to dig deeper to get a true picture of what`s going on.

"If the auditor general shows up with management, they're going to scrub and clean all the floors and hire a ton of staff, brush everyone's teeth, make sure everything looking hunky dory," he said.

NDP leader Brian Mason believe the auditors in Saher's office should have checked on the residents.

"If people are living in inhumane conditions, our seniors, then he needs to be able to say so," he said.  "And he needs to get out of his office."

Seniors care in long-term care facilities: While Saher said long-term care has been improving since the department was last audited in 2005, Wednesday’s report said more needs to be done, particularly in ensuring that care plans for each person are followed ach day.

He also found that monitoring was duplicated by AHS and Alberta Health and that there was "fragmented responsibility."

Alberta has 170 long-term care facilities with more than 14,000 patients.

“The report was not clear on whether the plan was on track; it also contained inaccuracies. The Department of Environment and Sustainable Resource Development’s project management was weak.”

The Alberta Environmental Monitoring, Evaluation and Reporting Agency (AEMARA) took over the province’s commitments under the joint agreement in Apr. 2014. Saher's report said AEMERA will need to clarify how it will meet its outstanding commitment by March 2015.

Government contracting: The report found that the province’s departments of Health, Municipal Affairs and Executive Council did not follow their stated policies when selecting a contractor, and also failed to properly document the selection process. Saher also found the administration of contracts in each case was substandard.

“There is a lesson here. It is not wrong for anyone, based on their experience, to recommend a contractor in particular circumstances. It is wrong, however, for the party acting on that advice to treat the advice as overriding their obligation to comply with all of their contracting policies before and during the contract that they now have ownership of.”

Saher said his office would be following up with the three departments to learn why they do not follow a common contracting policy.

Innovation and Advanced Education: Saher's report card on financial reporting at the Universities of Alberta, Calgary and Lethbridge, along with Athabasca University, showed all four schools are successfully meeting adequate standards. He noted, however, that Athabasca University still has outstanding recommendations to meet.

Saher said progress is being made on the listing of outstanding recommendations, noting 73 recommendations have been implemented since the last audit in Oct. 2013.

The departments with the highest numbers of outstanding recommendations, in order, are Health, Environment and Sustainable Resource Development, Innovation and Advanced Education, Infrastructure and Treasury Board and Finance.